Three newborn lemurs will be joining the Bronx Zoo's Madgascar! exhibit starting today. The wee ones are two ring tailed lemurs and one brown collared lemur, all of whom were born in late March. If you go, you'll have to look very closely to see them, because baby lemurs "cling to their mothers and nestle in their fur," according to the Wildlife Conservation Society.

Both species of lemur are classified as "endangered" in the wild (and Madgascar is the only place where they are found in the wild), and the WCS is proud of the Bronx Zoo's success in breeding lemurs. 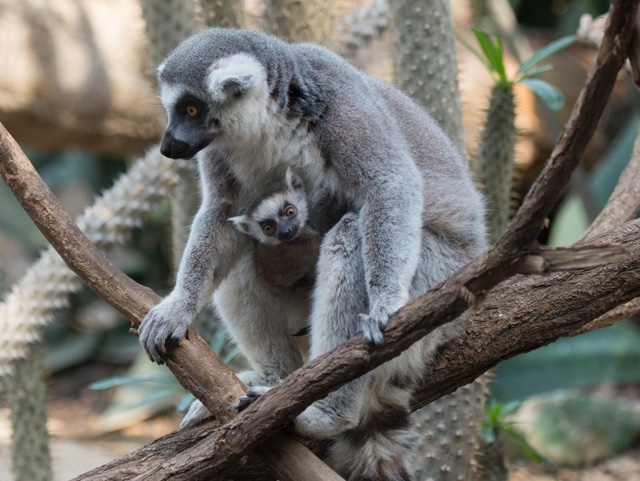 Some details from the WCS:

Ring-tailed lemurs are very social and live in large matriarchal groups that often contain several breeding females. They are capable climbers, but spend much of their time on the ground. Newborns will ride on their mothers’ chest and back for the first few weeks and will begin move around on their own within two-to-four weeks, but still stay close to their mother.

Collared lemurs use their long tails to balance when leaping through the forest canopy. They live in groups of males and females but are not matriarchal like many other lemur species. The young ride on their mother’s back hiding in her fur for the first few months of their lives. 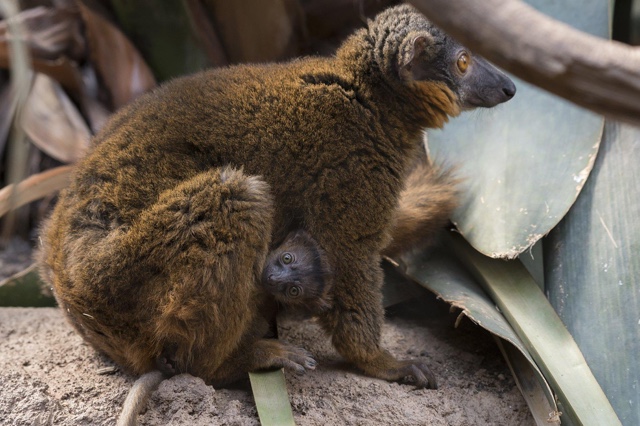 There are four other species of lemurs at the Madgascar! exhibit: red ruffed lemurs (Varecia rubra), gray mouse lemurs, crowned lemurs, and Coquerel’s sifaka. Black and white ruffed lemurs can be seen at the Central Park Zoo. And, FWIW, King Julien is a ring tailed lemur. Here's some video of the baby lemurs:

In other lemur news, an article published in a scientific journal yesterday says, "Humans aren't alone in their ability to mix perfumes and colognes. Lemurs, too, get more out of their smelly secretions by combining fragrances to create richer, longer-lasting scents, finds a study led by Duke University."

The "perfume" of the ring-tailed lemur could never be confused with Chanel. Male ring-tailed lemurs, our distant primate cousins, produce their distinctive musky odor with help from a pair of glands on their wrists that give off droplets of clear, fast-evaporating fluid, and a second pair of glands on their chests that secrete a brown, foul-smelling paste.

Males use their scents to mark territories and tell rivals to back off. Sometimes they deposit wrist secretions alone, rubbing their wrists directly onto branches and saplings. Other times they mix the two, pressing the insides of their wrists against their chest glands to mingle the scents. They also smear the pungent mixture on their tails, waving them in the air and wafting them at opponents to see who can outstink the other in a ritual called "stink-fighting."