On Friday night, thousands of people lined up around East 79th Street and 5th Avenue and stood for hours in chilly temperatures, waiting to hear 20-minute lectures with titles like Subjectivity in Kierkegaard and Buddhism and Metaphysical Daring as a Post-human Survival Strategy.

A Night of Philosophy, a free, twelve-hour philosothon featuring more than 80 speakers, performances, and a multilevel discotheque, was hosted by the Cultural Services of the French Embassy and the Ukrainian Institute of America from 7 p.m. to 7 a.m. Saturday morning.

According to the event's organizers, more than 5,000 people passed through the metal detectors of the two stately old buildings to sip beer, watch performance art, and listen to readings and lectures.

Tim Maudlin, a professor of philosophy from New York University, had a choice 11 p.m. time slot for his lecture, A 15-Minute Proof that the World is Bizarre.

Maudlin gave a concise and animated explanation of Bell's theorem, and the crowd of roughly 100 people packed into a modest-sized ballroom were alert and receptive.

"The world is not the way you think it is, not the way any of us grew up thinking it was, in a way you really can't get your head around," Maudlin told the group.

Artist Ofri Cnaani lead a group of thirty participants through a narrative performance that ended with her assertion that true ecstasy could be found in Times Square. "It's a place of extreme extravaganza," she said.

"There is so much about how New York is a place for many risk takers and many people living on the edge and its risqué is part of its allure. And today New York becomes a much safer place, a much more sanitized place, a great place to raise kids, a much richer place, but there is still a question there if you are developing the New York ecstasy story. You still have to ask the question is this ecstasy still in the city or has it been pushed out with the cleaning of the city from the danger?" 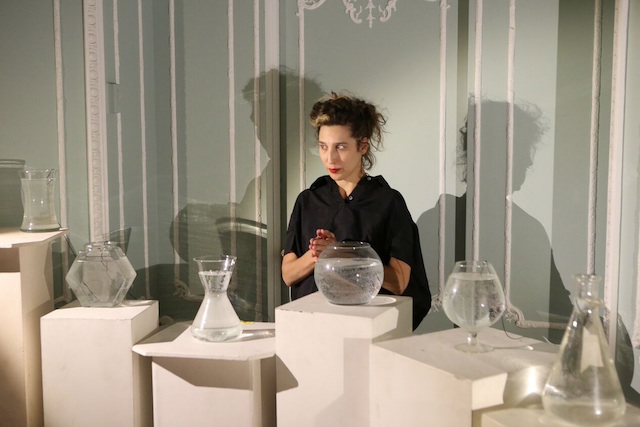 Florent Guenard of the Universite de Nantes delivered a lecture that posed the question, Do We Really Want to be Equal?

"We no longer love equality, and we are probably less attached to democracy than we think," he said, before adding that equality is difficult to love, given that people are more comfortable with the idea of liberty.

"I think we must have some means…to explain why we must be equal in society—in a democratic society. It's very important, a culture of education. And I think that today democracies have lost this culture."

As the lectures continued into the early morning, the event was invigorated by a steady stream of dedicated participants who had waited hours in a line that at one point spanned four blocks.

At around 1:30 a.m., as the temperature hovered around 40 degrees, two young men attempted to climb the barricade outside the Ukrainian Institute of America (which was seemingly the more popular of the two host houses, as it held the only cash bar—coffee and nibbles were gratis).

The men were immediately pushed back by a thin man spouting a streak of French. "Putain!" he shouted, as the two sheepishly resumed their wait. The evening's organizers said that there was a robust line outside the event until at least 5 in the morning.

David Jensen, a high school senior hoping to minor in philosophy in college, gained entrance at around 2.30 a.m., four and a half hours after he got on line. Asked if it was all worthwhile he replied, "Even standing in line the conversations that were going on around us they were really good. So yeah, I'm glad that I waited in line. I'm really excited for it."

#a night of philosophy
#french consulate
#philosophy
#Ukrainian Institute of America
#upper east side
#original
Do you know the scoop? Comment below or Send us a Tip