This Week In NYC Soccer: The Pirlo Party Begins

This week's soccer action saw the debut of Andrea Pirlo (and a ton of goals) at Yankee Stadium, a lot of weirdness in Harrison, and more struggles for the Cosmos. 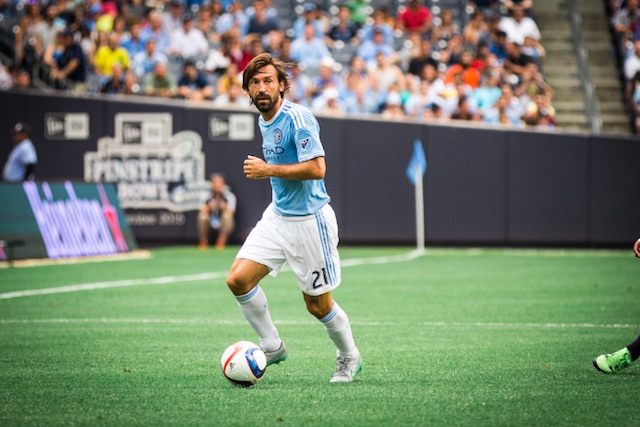 Andrea Pirlo made his debut in NYCFC's 5-3 win over Orlando. (photo: NYCFC)

An important soccer lesson coming out of the Bronx: poor defending won't matter if you can run up the scoreboard. Italian maestro Andrea Pirlo made his debut as a substitute a memorable one as NYCFC blitzed fellow expansion side Orlando City 5-3.

Pirlo's insertion came in the 57th minute, as City looked to hold onto a somewhat tenuous 2-1 lead with goals from David Villa and Javier Calle. Added goals from Villa and Thomas McNamara would see a second straight four goal performance at Yankee Stadium, but Orlando's Cyle Larin would complete his hat trick to keep the Lions close in the dying moments of the match.

With Kaka preparing to take a late free kick in front of the NYCFC goal, a sense of deja vu may have set in, as his deflected free kick provided a late equalizer in the opening match between these two sides back in March. But the script was not the same: Josh Saunders pushed the shot into the post, City swarmed on the counter-attack, and Mix Diskerud would finish off a three-on-one attack to end the match 5-3.

Despite not showing up on the final score sheet, the locker room was full of praise for Pirlo. “You could really see his range of passing and it opens up the field,” raved Tommy McNamara. "When he gets on the ball you just know that he’s going to keep it. He’s always going to be able to make the forward pass so it allows our team to get into different spaces and still expect to receive the ball. It really opens it all up for us.”

“He has a really great calmness around him and you see it when he’s on the ball, as well. He really knows how to move the ball and he really sees everything,” added Diskerud.

For his part, the typically unflappable Pirlo was touched by the loud welcome from the 32,000 fans at the match. “It was great because I could tell that they wanted me to play. When I got on the pitch, it was absolutely amazing to hear all of the applause. It was very emotional to hear and I really did appreciate it.”

Red Bulls: Unofficial Champions Of England And Portugal, But Out Of The US Open Cup

It’s been an extra-Metro week in Harrison, where the Red Bulls dispatched both Chelsea and Benfica in friendlies, but was embarrassingly eliminated from the US Open Cup by Philadelphia.

Starting with the Open Cup debacle: because of the scheduling of the International Champions Cup and Philly playing hardball, the Red Bulls were forced into a 4PM kickoff on Tuesday. As the only serious competition of the week, they fielded a first choice lineup, and when Conor Casey saw a first half red card, they had a man advantage for the majority of the match. But Philly bunkered after taking a shock lead, the Red Bulls could not break them down, and it took a miracle goal from Lloyd Sam in stoppage time to push the game into extra time. With tired legs from the heat and humidity, the game eventually fell to penalties, and Philly would take the win in the shootout as Bradley Wright-Phillips missed his third straight spot kick.

With the starters burned on the Philly debacle, expectations turned to slaughter for the next day's friendly against the Premier League champions, Chelsea FC. The home lineup resembled that of New York Red Bulls II, the club's reserve team that plays in the US third division. Meanwhile, Chelsea trotted out a lineup with the likes of Cesc Fabregas, Eden Hazard, Branislav Ivanovic, John Terry, and Thibaut Courtois. The slaughter happened, but at Chelsea’s expense: Sean Davis found the net twice, while Franklin Casetllanos and sixteen year old Tyler Adams tacked on goals of their own in what would be a 4-2 win.

The Red Bulls, who just signed the other Wright-Phillips brother this morning, travel to Philadelphia on Saturday for a league match, and perhaps revenge.

Cosmos Struggle To Get Going In The NASL Fall Season

After an impressive unbeaten run in the Spring Season, the Cosmos are swooning a bit in the fall. A 1-1 draw at Indianapolis means they have still not won since the NASL season resumed. Walter Restrepo scored the lone Cosmos goal in first-half stoppage time, but Dylan Mares would equalize moments later.

One bright point for the Cosmos was the first-team debut of US U-17 striker Haji Wright. "I thought he brought life, he moved well, showed some of his qualities,” said head coach Giovanni Savarese. “For a 17-year-old making his debut, it was a very positive day for him. That’s what we want, we want him to develop and grow. He’s going to grow in these matches.”

The Cosmos will return home to Shuart Stadium on the 5th of August, looking to break their streak against Minnesota United.