This Week In NYC Soccer: Make Your Own Luck

All three area soccer teams were in action, as the Red Bulls kept their hot start alive, the Cosmos got a result on the road, and NYCFC fell apart in Chicago.

A small stumble in the Red Bulls hot start saw them fight back for a draw against the visiting LA Galaxy on Sunday night. The 1-1 result stretched their unbeaten run to six games, their best ever to start a season.

All the trademarks of the 2015 Red Bulls were on display early: the high press, the forcing turnovers, and a threatening attack. But LA would strike first, with Bradford Jamieson IV making a snaking run into the box and tucking in a far post shot in the ninth minute. It was the first goal the Red Bulls have allowed at home in 2015.

For all the finesse, energy, and skill the Red Bulls have shown so far under Jesse Marsch, it was a complete fluke involving his prized midfielder Felipe that would earn the draw. A ball into the box was struck by Bradley Wright-Phillips, but the shot deflected off A.J. DeLaGarza, into the very unaware face of Felipe, and into the back of the net.

Felipe admitted he was an innocent bystander in the goal. "We have been working on the midfield going to the offensive part and I was lucky to follow the action and the ball went right to my head. That was the goal, I had to look again but I was completely lucky.”

The draw keeps the Red Bulls unbeaten with a 3-3-0 record, but have fallen to third in the East. The Red Bulls pull a double duty next week, hosting Colorado on Wednesday night before a trip north to Foxboro on Saturday to face the Revolution.

Dejected from the result, LA Galaxy mascot Cozmo (who is a sort of taco-loving alien - don't ask) took to Times Square this morning hoping for tips:

So, my attempt to work for some tips didn't go so well.... #ThanksBatman pic.twitter.com/jZk0mketYM 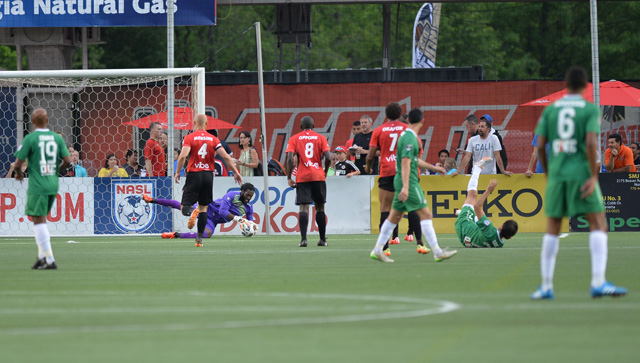 Raul could not find the net against the Atlanta Silverbacks. (photo: New York Cosmos)

There wasn’t much to write home about as the Cosmos played to a scoreless draw at the Atlanta Silverbacks on Saturday. The Cosmos lead on the stat sheet, holding 55% possession and outshooting Atlanta 17-5, but neither remaining unbeaten NASL team could break the deadlock.

The most frantic action came after the match, as Silverbacks fans rushed the field hoping to meet Raul. Police escort intervened to help him off the field:

The Cosmos return to the NYC area still leading the NASL Spring Season table, ready to play their first ever match in Brooklyn next weekend. The match between the Cosmos and the Ottawa Fury kicks off on May 2nd and 7PM, and will be immediately followed by the Cosmos reserve side, Cosmos B, taking on the Brooklyn Italians in an NPSL matchup. 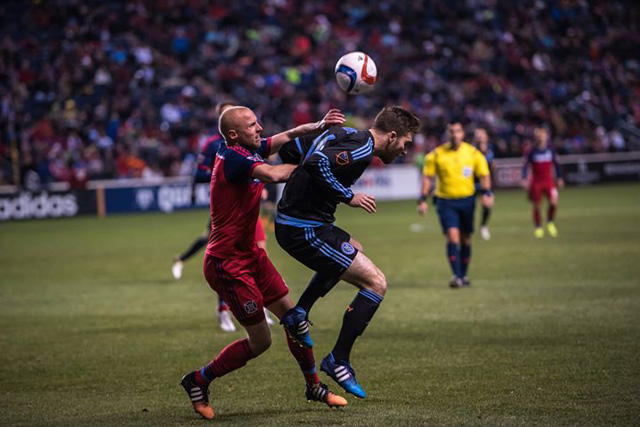 The woes continue for Jason Kreis and NYCFC, who suffered a second straight defeat and closed out April without a win after a 1-0 road loss at Chicago.

There’s plenty to point at that may have helped trigger the loss. Was it the continued absence of David Villa, still nursing an injury? Was it a 24th minute red card given to Andrew Jacobson that forced NYCFC to play the majority of the match with 10 men? Was it mid-match injuries to both Adam Nemec and Javier Calle that required two first half subs?

Or was it goalkeeper Ryan Meara who, despite six vital saves to keep NYCFC in the match, committed this howler in the 20th minute to give Chicago’s David Accam a free goal?

Head coach Jason Kreis remained resolute in his optimism after the match. “I’m continually impressed by this team. They keep fighting and not giving up. I’m pleased with that. I’m pleased with the resolve and the togetherness. I wish that we had figured out a way to get a little more attack going in the second half. After the ejection in the first half actually, we had some decent chances at goal. But credit to Chicago, I think they did a much better job in the second half of pinning us in and not allowing us any time or space on the ball.”

NYCFC (1-3-4) now sit 8th in the Eastern Conference. They will face Clint Dempsey and the notoriously strong attack of the Seattle Sounders at Yankee Stadium on Sunday, May 3rd.

#mls
#nasl
#ny cosmos
#nycfc
#red bulls
#soccer
Do you know the scoop? Comment below or Send us a Tip