This Week In NYC Soccer: At Least Cosmos Fans Are Happy

This week's NYC soccer action saw the Cosmos continue their unbeaten run, Jason Kreis suffering an unhappy homecoming, and the Red Bulls getting smoked at home. 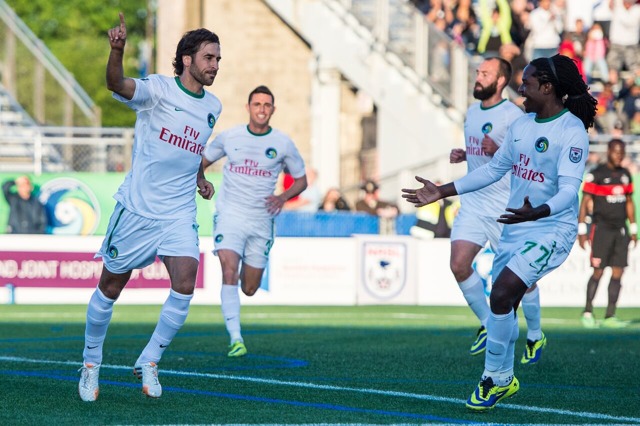 The Cosmos remain the toast of NASL, and a dominant performance at Hofstra saw them see off the San Antonio Scorpions 3-0 on Saturday.

Coach Giovanni Savarese was full of praise for his side not losing focus despite holding the lead the bulk of the match. "Even at 3-0 we kept on making sure we stayed on the game plan. We played like it was 0-0 until the 92nd minute. It was one of the most complete games we played so far in the past three years."

Raul converted a penalty in the 18th minute to open the scoring for his third goal of the season. While San Antonio held the game close, Roversio would add an insurance goal off an Ayoze free kick in the 81st. Leo Fernandes would put the game out of distance with a headed goal in the 86th minute.

"We had in front of us a very good team," said Raul after the match, "technical and physical and I think the response from the team today was very good, the performance, the mentality. We are very happy, but now we have to go forward in the same way."

Going forward will be pivotal as the Cosmos enter the most crucial stretch of the spring season. On Wednesday night they enter the U.S. Open Cup, the domestic cup competition the club has repeatedly put emphasis on since returning to NASL. If they can knock off Jersey Express of the USL-PDL, they will gain the opportunity to extract blood from an MLS side for the second straight year, as they would host NYCFC in the fourth round in mid-June.

While the Open Cup remains their biggest goal for the year (victory would see them into the 2015-16 CONCACAF Champions League), they can't lose sight of the NASL Spring Season, where they hold a six point lead at the top of the table. While their form has been strong, the NASL schedule is such that an single blip in form could allow Minnesota or Tampa Bay to pull level. They'll need to maintain that form to close out that Spring Season, with the additional complication of their much-anticipated trip to Cuba in early June for a friendly.

Around the circle of people who live and breathe soccer around NYC, one question seems to be growing in volume every week: "Do you think Jason Kreis is at risk of getting fired?"

When Jason Kreis was poached following seven impressive years at the helm of Real Salt Lake, it was uniformly lauded as a great move. Kreis was respected as a master tactician, as a coach capable of developing a clear playing style in a league full of fairly rudimentary tactics, and a fantastic fit at the helm of the NYCFC project.

Twelve games into the season, NYCFC sits at the bottom of the combined league table. After suffering a 2-0 road battering at the hands of his former club, the club's winless streak has extended over two months and stands at 10 games.

Where has it all gone wrong?

It's easy to point to them as an expansion club, which is typically a pretty nasty first year jinx for any MLS club. But it's also notable that most expansions clubs weren't built with claims to having access to Manchester City's global scouting network, or having the luxury of sending their coach to a global training center to learn "the City way". Few expansion teams also have the type of quality players that a Mix Diskerud or David Villa should represent.

Perhaps that, in a nutshell, is the real problem here: despite all these alleged resources, NYCFC's roster is lacking in quality talent. The club, which hit its two year anniversary of existence this past Thursday, has had plenty of time to scout, acquire, and deal for talent. But rookie football director Claudio Reyna's roster moves were largely for journeymen, unknown players languishing in foreign leagues, or talented-but-raw rookies.

Salvation may be coming soon: Frank Lampard's stint at Manchester City is done, and he's expected to be added to the roster as soon as the secondary MLS registration window opens on July 8th. The window opening will also allow Reyna the chance to fix what's broken with the roster. Rumors are already flying now that the European seasons have ended, with both Didier Drogba and Andrea Prilo being linked with the club in the last 24 hours.

Before then, NYCFC will face a gauntlet of six more league games, as well as their entry into the US Open Cup against the winner of NY Cosmos-Jersey Express. While Jason Kreis is likely safe until at least the end of the season (the only indication of any impatience from the City mothership was CEO Ferran Soriano randomly appearing at practice a few weeks back), he'll need to find a way to start getting points and lift his club from the bottom of the league.

The Philadelphia Union had never won at Red Bull Arena. They had been largely miserable this season and recently suffered a fan protest, while the Red Bulls had been flying high. The Red Bulls were still unbeaten at home. Philadelphia was missing their best striker and their best defender.

And in what at the time felt like inspired banter, Red Bulls fans continued to play down any talk of a rivalry with Philadelphia with a hashtag preaching aindifference that Philly was coming to town.

I hear Philly has less traffic than NYC, but I live in NYC so I don't really need to go to Philly #PhillyIndifferenceWeek

My best friend growing up moved to Philly. We grew apart. He's married now...or something. I think. We don't talk. #PhillyIndifferenceWeek

Pennsylvania is full of Dutch people. Or Germans? Is there a difference? Honestly no idea. #PhillyIndifferenceWeek

So, naturally, the Philadelphia Union beat the Red Bulls 2-0 in front of a shocked home crowd Sunday evening. (This is why you don't bet on MLS.)

The Red Bulls were not lacking in chances, pinging both posts in the first half, but they could not break down Philadelphia's defense. On the other end, a makeshift defense (Damien Perrinelle was scratched right before kick-off, and Kemar Lawrence was forced to sub out half an hour into the match) eventually broke down, as Vincent Nogueira and CJ Sapong put two past Luis Robles in a five minute span.

Jesse Marsch didn't seem particularly crest-fallen after the match, but acknowledged a need to figure out how to break down teams that are sitting back. "We need to learn from it. We're going to experience different kinds of games at different moments. We haven't quite been sharp enough and good enough when teams sit back to now create enough chances and now be effective enough around the goal so we got to continue to get better at that."

They may not have to worry about that too much with the schedule ahead, though. They'll face three straight Western Conference opponents in Seattle, Houston, and Vancouver, most of which bring their own high powered offense. The defensive line will need to come together with Young Matt Miazga away at the U-20 World Cup and Ronald Zubar perpetually injured.

OTHER SOCCER THINGS ARE HAPPENING TOO

We've been so focused on club soccer as of late we've forgotten to mention the handful of other soccer-related events coming up over the next few weeks:

#ny cosmos
#nycfc
#red bulls
#soccer
#sports
Do you know the scoop? Comment below or Send us a Tip