This Week In MLS: What A "Boring" Sport

It's amazing what a full week off between games can do. Rested and recharged, the Red Bulls took their revenge on the Revolution, putting on their first four goal performance of the season. 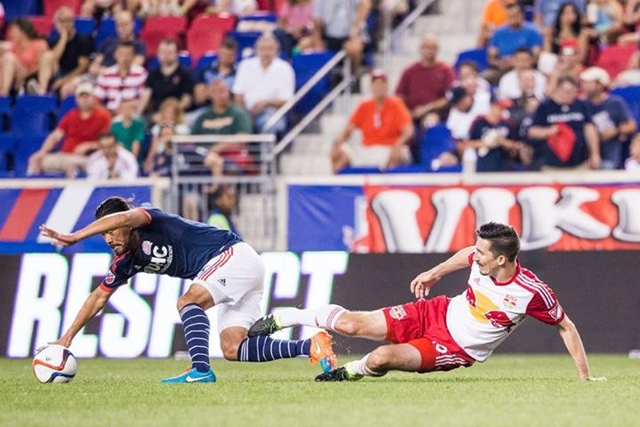 “The word I used was, just let’s be ruthless,” said captain Dax McCarty after the game. "This is a team that has given us trouble the past couple of times we’ve played them. I think it’s mostly because they’ve out-fought us and out-worked us mainly on the physical end. We wanted to make sure we set the tone early, right from the opening whistle."

Ruthless was certainly the word for the opening period, where the Red Bulls put three past Revs GK Bobby Shuttleworth in the opening twelve minutes. Lloyd Sam was given plenty of room to turn around in the box and ping a cross to the head of Bradley Wright-Phillips for the opener in the 4th minute. Some great team passing allowed Mike Grella to spring Lloyd Sam in the 9th minute to widen the margin to two. New England went to Tire Fire Mode just three minutes later, when they allowed a slow rolling pass from Sacha Kljestan to find McCarty, who one timed a through ball to BWP for the third goal.

The Revs trimmed the margin to two off an Andy Dorman goal later in the half, and tried to threaten as best they could. But Charlie Davies was shut down by Matt Miazga (who's stock is rising fast), while former RBNY academy product Juan Agudelo couldn't do much of anything. The second half saw fullback Anthony Wallace to put his stamp on the result when his long range blast caromed off two Revolution players to leave Shuttleworth flat footed. The Red Bulls nearly had a fifth goal when Jose Goncalves was sent off for taking down Sal Zizzo, but Zizzo's spot kick was saved.

The Red Bulls, now back up to second in the Eastern Conference, travel to Orlando next weekend.

SHOOTOUT IN THE BRONX: NYCFC 4, TORONTO 4

Two high powered offenses met two lackluster defenses in Sunday's slugfest in the Bronx. Neither David Villa nor Sebastian Giovinco could make up for their club's poor back line as both City and Toronto shared the points in a game that could only be dubbed as “Peak MLS”.

“For me, that's the type of game that fans love and coaches hate,” said Jason Kreis after the match. “Lots of loose stuff there, lots of bad plays, lots of lack of focus, lot of tired guys. It’s hard to play a game in those conditions for sure." 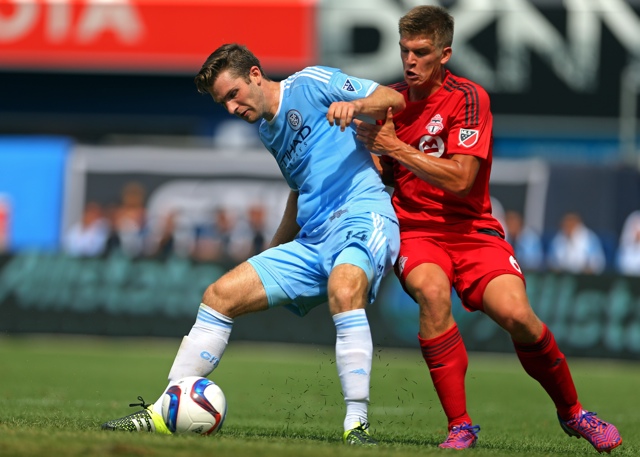 The home side built up a two goal lead nicely in the first half, with Villa opening the scoring directly off a free kick. Toronto’s star striker Giovinco would miss a penalty minutes later, as would Villa - but Villa’s miss was mopped up by Patrick Mullins, who bounced a shot off a defender for an own goal and a two goal advantage.

But no lead is safe when you’ve got a shaky back line, and over a nine minute span, Giovinco completed a hat trick. He converted a second (questionable) penalty, and then abused defender Kwame Watson-Siriboe on two straight chances to flip a 2-0 scoreline to 2-3.

Giovinco would continue to rip apart NYCFC’s defense - even with Athletic Bilbao legend Andoni Iraola and MCFC prospect Angelino mading their debuts - but a fourth goal eluded him. Referee Ted Unkel continued to find new and creative ways to point to the penalty spot as he awarded a fourth (questionable) penalty, this time to NYCFC, allowing Villa to level the score again. The four penalties was an MLS record for most awarded in a single match.

Both teams would manage some late heroics, as Giovinco danced past the NYCFC defense to set up Marky Delgado for a go-ahead goal, followed by Patrick Mullins again finding the net two minutes later to finally settle to score at 4-4.

Asked about his feelings on the result in the locker room, Mullins seemed mixed: “100% positive but a little unsatisfied with how the game turned out. Any time you have a 2-0 lead at home with these great fans, you expect to come away with three points. So that’s left a bitter taste in our mouth."

NYCFC sit ninth in the Eastern Conference, although they’re only five points back from the Red Bulls. They travel to New England next weekend.

#mls
#nycfc
#red bulls
#soccer
#sports
Do you know the scoop? Comment below or Send us a Tip