There's an unusual sight nestled amidst the homogenous glass buildings on one 42nd Street block in Midtown: a graffiti-covered authentic subway car. Every day, thousands of New Yorkers and tourists walk past this relic of old NYC, which currently resides in the ground floor of 120 42nd Street near Bryant Park. But where did it come from, how did it get there, and why is it in the middle of an otherwise empty room? 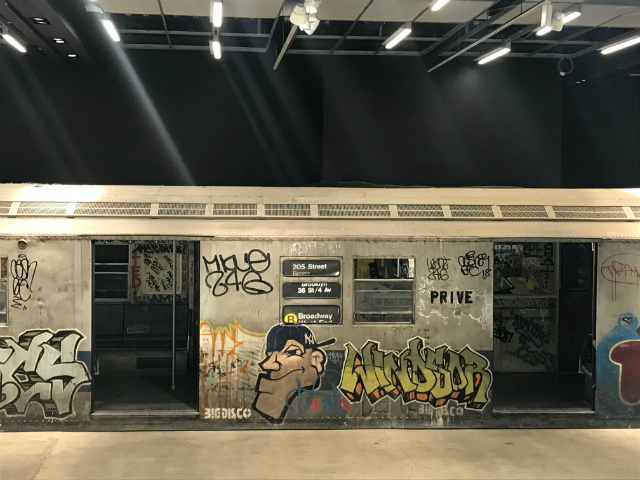 As the placard sitting in front of the car explains, Car 8394 was a working NYC subway car built back in the early '60s. The car was found in the Mojave Desert and transported back to the city in 2014. "After 42 straight days of work, by skilled artisans in Burbank, California, Car 8394 was restored to its original glory and started on its journey back to New York City. The car that sits before you arrived back in New York City on October 13th, 2014, and was installed here at 3 a.m. on October 14th." 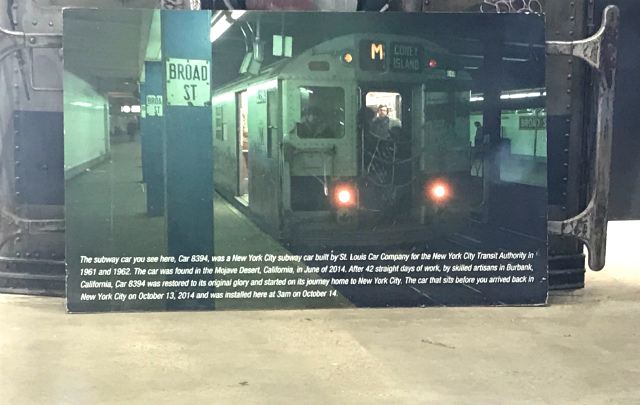 You can see a video of Car 8394, along with two other abandoned subway cars in the desert, in this video we shared back in 2012. The video uploader wrote that he found the cars—along with a bunch of NYC buses and a "shot up taxi cab"— in an undisclosed desert junkyard. "As if that wasn’t odd enough, [the subway cars] were each chopped in half."

The car was retired way back in 1993 according to Untapped Cities, and along with those other cars and buses, was used for a decade on Hollywood sets for films like Money Train, Die Hard With A Vengeance and Godzilla.

As the desert video uploader wrote, "I spoke briefly with the property owner who explained to me that they were primarily for studio use and that occasionally they would be rented out. This involved the cars being lifted via crane on to flatbed trucks and hauled off. He told me that in one recent case, a company had contacted him about shipping them all the way back to New York for some sort of photo shoot and then back to the junkyard in California."

So after its retirement and second life as a Hollywood prop, it was brought back to NYC in 2014 for the illustrious purpose of... selling sneakers. It became the centerpiece of the Asics flagship store in Midtown Manhattan, which ended up closing in 2015 less than a year after opening.

Here is a very weird, slightly blurry video showing photos of the restoration of the car:

And here, you can get an impression of how the store was using the car (they literally stacked sneakers, athletic wear and racks of shirts inside the car) before it shut down:

For three years now, this remarkable piece of NYC history has sat inside the abandoned store. We've reached out to the MTA to ask whether they know anything about what the future may hold for lonely Car 8394. 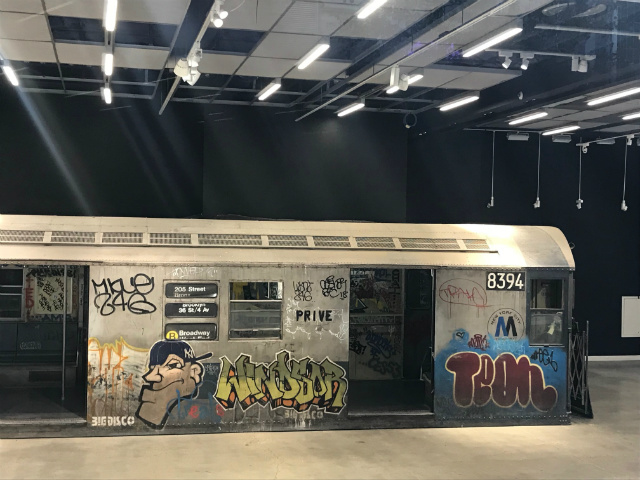 #asics
#midtown
#mojave desert
#MTA
#subway
#subway car
#Times Square
#train
Do you know the scoop? Comment below or Send us a Tip
A new Gothamist is coming! We’ve moved comments over to our beta site. Click here to join the conversation and get a preview of our new website.