This Massive Reservoir Used To Be In Midtown The Croton Reservoir was a massive above-ground reservoir that held 20 million gallons of water from the Croton River—it boasted walls 50-feet tall and 25-feet wide, and stood where the New York Public Library stands today. To build it, the adjacent plot (now Bryant Park) also needed to be cleared, which meant exhuming thousands of bodies and transporting them to Wards Island, as the land there was a potter's field at the time.

The project was completed in 1842—a moment historian Henry Collins Brown called "the greatest forward stride in the city's history, [with] the general introduction of running water"—but was eventually torn down to make way for the library in 1900. By 1902, the cornerstone was laid for the library's main branch, which still holds part of the reservoir's remnants today. 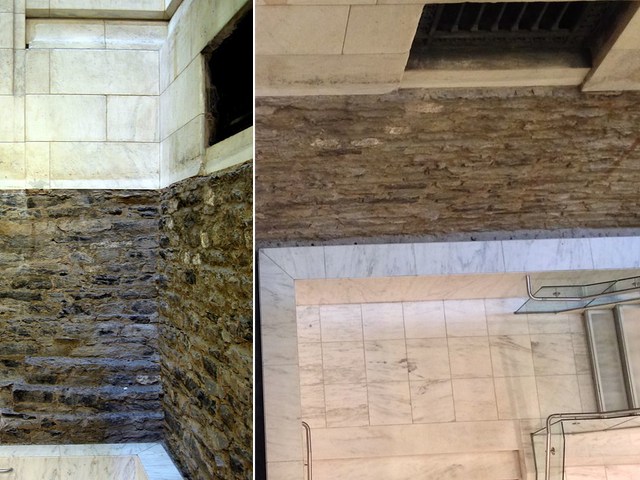 The NYPL's Angela Montefinise told us this morning that anyone can see these remains—"you can still see it on the lower level of South Court in the Schwarzman Building (near the auditorium). It's not closed off. If you walk into South Court on the first floor and look down, you can see it (if you don't want to go all the way downstairs)." There's also a plaque located in the subway system—on a wall in the passageway that connects the 5th Avenue station and 42nd Street station.

Click through for a look at what the reservoir looked like when it was still standing—in an 1844 edition of the Columbia Spy, Edgar Allen Poe wrote, “When you visit Gotham, you should ride out Fifth Avenue, as far as the distributing reservoir, near Forty-third Street, I believe. The prospect from the walk around the reservoir is particularly beautiful. You can see, from this elevation, the north reservoir at Yorkville; the whole city to the Battery; and a large portion of the harbor, and long reaches of the Hudson and East Rivers." 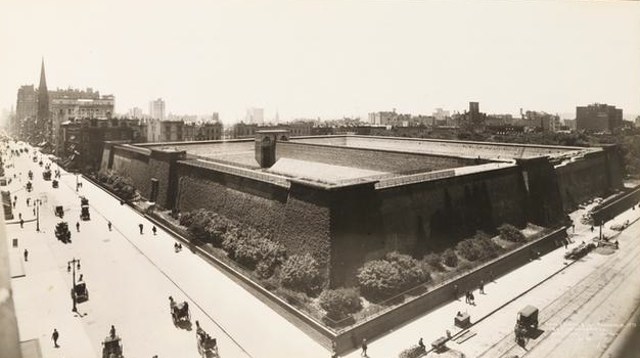 That elevation Poe referred to was from the promenade, which hosted groups of gatherers on a daily basis, making for a "delightful scene at night, with the moonlight dancing on the water."

#nypl
#croton reservoir
#original
#history
#flashback
Do you know the scoop? Comment below or Send us a Tip