This Is The Greatest X-Files Episode, Or Maybe Rewatching Every Episode Broke Me

One hundred and seventy-six episodes into my X-Files marathon, I finally lost control.

It was Season 8, Episode 15: “DeadAlive.” David Duchovny’s contract dispute meant that Agent Fox Mulder was dead—or mostly dead, anyway. His fungus-riddled body had just been exhumed, and though he showed signs of life, his fate was uncertain.

Mulder’s replacement, FBI Agent John Doggett—played, uh, doggedly, by Robert Patrick—refused to believe that Mulder and another alien abductee had somehow come back to life.

“It’s a medical mystery for sure, but don’t make me take a load of horse crap for the gospel truth,” he tells Agent Dana Scully in a Cop Brogue that would embarrass the cast of NYPD Blue. “I don’t believe it.”

“I don’t believe it,” says the guy who, four episodes earlier, was shot, killed, and had his dead body devoured and violently regurgitated by a soul-eating shaman, good as new.

“You woke up naked in a fucking cave, remember?” I was shouting at the television now, my abrupt shift in posture prompting angry flatulence from the faux-leather couch. “You had all this goo on you but you were brought back from the dead! Yes, you!”

Tears of maniacal laughter streamed down my cheeks. All of the scorn I had held in abeyance for The X-Files came flooding back. The serpentine, contradictory mythology, the obscene Monsters of the Week, the hilarious deus ex machina (Of course Krycek is hiding behind that fern, ready to inject a mysterious serum into someone’s spinal column). “I don’t believe it.” I don’t believe it?

By many accounts, "The Gift" sucks. Scully is completely absent (visiting her daughter IRL) and Assistant Director Skinner can't carry that burden (sorry Mitch). There's a lot of talk of cancer—in Mulder's brain in people's kidneys—so there are a lot of Mark Snow's oboes floating around. I hate those oboes.

But “The Gift,” also embodies the best of The X-Files. It significantly distorts a simple formula in surprising ways. It is ridiculous and disgusting. It is entertaining. “The Gift,” is not the best episode of The X-Files, but it is its apotheosis. You can stop your marathon right there. I probably should have.

And like an X-Files devouring shaman, I consumed all 202 episodes and regurgitated these, so that your soul may stay pure.

The Gift of “The Gift” may only be appreciated with the rest of The X-Files catalogue, which tonight and tomorrow will have two more episodes in its canon.

Here are some of the episodes that I found myself yearning for while I was knee-deep in a two-episode dream sequence featuring Michael McKean. 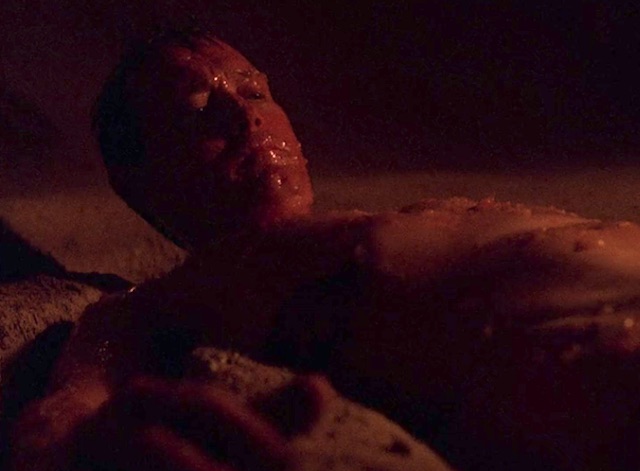 “Blood” Season 2, Episode 2—Often overshadowed by the sewer shit monster from Jersey in the preceding episode (“The Host”), “Blood” is particularly significant because it has a somewhat-plausible plot line: chemicals dropped on crops are making people suffer from deadly hallucinations. If you think cramming a cat into an ATM is bad, you haven’t seen “Blood.”

“Humbug” Season 2, Episode 20—Bona fide circus performers are expertly cast in this “what is tearing huge chunks of flesh out of people living in this quiet community of weirdos?” whodunnit. But it’s Vincent Schiavelli—creepy enough to raise your suspicion, sad enough to elicit your sympathy—who makes this episode great. A man named The Enigma ends the episode with his only line, and it is a pun. 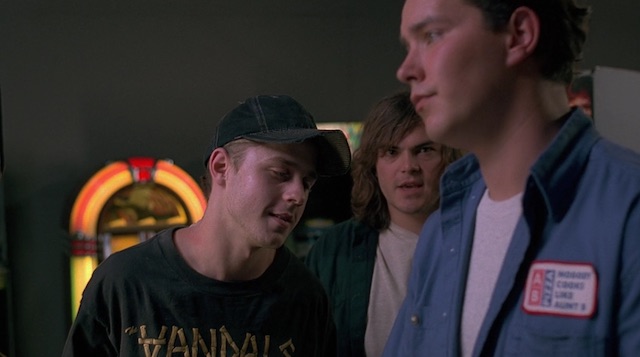 “D.P.O.” Season 3, Episode 3—What if a young Giovanni Ribisi could just rain lightning down on his enemies? And what if Jack Black was his friend? "Heyyyyyyyyyyy maaaaaaaaaaaaaan / This episode feels like 1995."

“2Shy”: Season 3, Episode 6—Internet dating was once considered the realm of spinsters and evil X-Files monsters, and while this episode exploits those fears, it also features, in Scully’s words, “a fat-sucking vampire.” In 2016 we might call him a "softboy" with a butt cut. 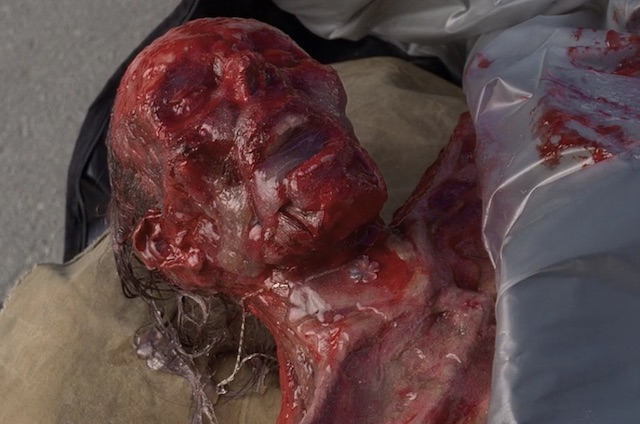 This is what happens when you date on the Internet

“War of the Coprophages” Season 3, Episode 12—Deadly cockroaches prompt mass panic, and one man to exclaim, “We’re all gonna be bleeding from our nipples!” This episode combines elements of the conspiratorial (who is making these tiny mechanical cockroaches?) with the campiness of a Monster of the Week (don’t adjust your dial, that’s a cockroach crawling across your screen). 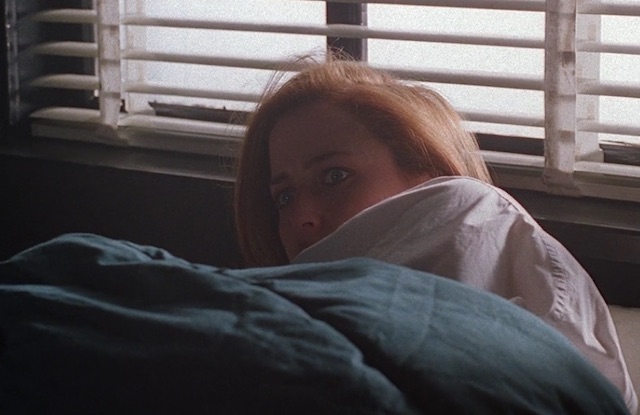 "Oh god, did I get a tattoo of an ouroboros with poisonous ink on my lower back last night?"

“Never Again” Season 4, Episode 2—Mulder takes a vacation and Scully is tired of his bullshit, so she meets a sweet guy with a jealous tattoo that talks to him in the voice of Jodie Foster (really). Scully gets tatted up too, and even has a sleepover! “All this because I didn’t get you a desk?” Mulder whimpers. “Not everything is about you, Mulder,” Scully replies. Roll credits.

“The Post-Mortem Prometheus” Season 5, Episode 5—Like “X-COPS” and the friggin Christmas specials, this episode is straight Camp, but it is also delightful. John O'Hurley earns his pay, and so does the Cher impersonator. 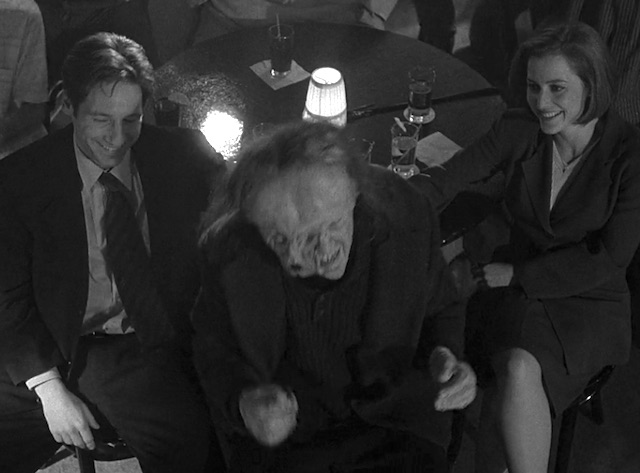 A good time had by all.

“Chinga” Season 5, Episode 10—I do not care for Stephen King, who co-wrote this episode, but I can’t say enough good things about mean little girls whose dolls make people claw their eyes out.

“Patient X” & “The Red and the Black” Season 5, Episodes 13 &14—The best of the Conspiracy arcs. Mulder has turned his back on this whole “alien” business, as it’s all an obvious misdirection by the government to further its own agenda (Mulder also takes this position in the first episode of the new miniseries). But that doesn’t explain the giant spaceship preparing to take The Chosen Ones away, or the faceless aliens who are immolating everyone with their silver rods of fire. And can someone sew that kid’s eyes shut again? He’s leaking black goo all over the sofa. 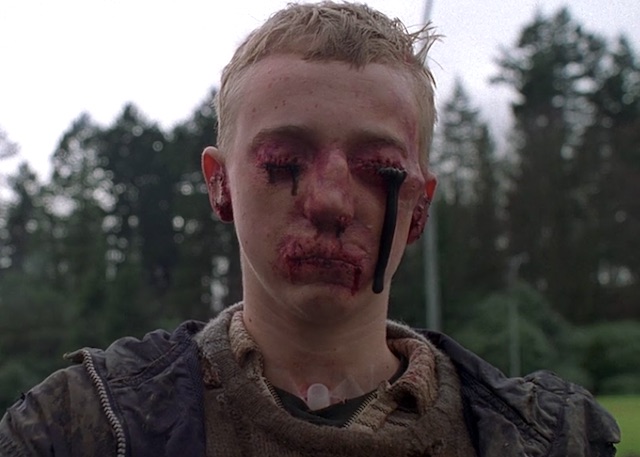 Someone get this kid a paper towel

"Folie à Deux" Season 5, Episode 19—This episode is arguably the most disturbing in the series. There’s a horrific workplace shooting, people’s bodies are being taken over by, whatever the hell those things are. Surely there must be a more complicated cause than giant monsters. Right? Right?

“Hungry” Season 7, Episode 3—Season 7 is perhaps the goriest season (heads explode!) and this episode continues the trend. Also deeply satisfying: “Customer service, man! Stop spankin’ it and get my food!” a man shouts into a drive-thru window, seconds before his brains are devoured. 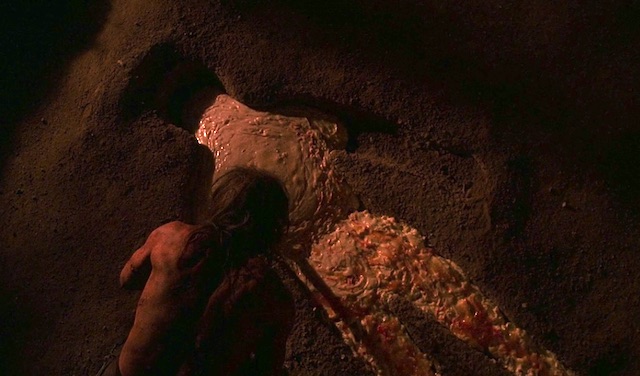 #greatest
#x-files
#yeah we need a new couch
#original
Do you know the scoop? Comment below or Send us a Tip