This Heartwarming Doggie Story For Mother's Day Gets A 13/10

Get your tissues ready—we have an update about the adorable pit bull mix who spent a year (!) recovering from an abusive living situation while looking for a furever home—and she found it. She was recently reunited with the dog she was rescued with... and the ASPCA believes they are mother-and-daughter! 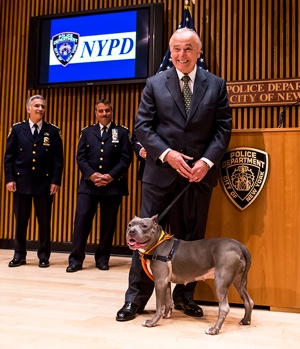 The puppers known as Jamie and Zaza were found severely underweight by police officers in Brooklyn's 63rd Precinct in April 2016. One-year-old Zaza's ears were both infected and she also had a skin infection between her toes, but by June, she joined then-Police Commissioner Bill Bratton for "Take Your Dog to Work Day" and was adopted right after.

Jamie, who was four at time, was more seriously injured: Her coat was paws were "soaked in urine and feces and her nails had grown so long they were curving into her feet," according to the ASPCA, who looked over her during her six-month road to recovery.

By the time she was healthy and ready to be adopted, police officers from 12 different NYPD precincts took her for a special day out.

Earlier this month, Jamie and Zaza met each other for the first time since being rescued. The ASPCA believes that Zaza is one of Jamie's daughters, and a spokeswoman said, "It's remarkable how they recognized each other immediately. Jamie doesn't like other dogs much, but she seems to love Zaza! She was rolling around in joy (something her adopters said she's never done) and was giving Zaza lots of ear kisses." 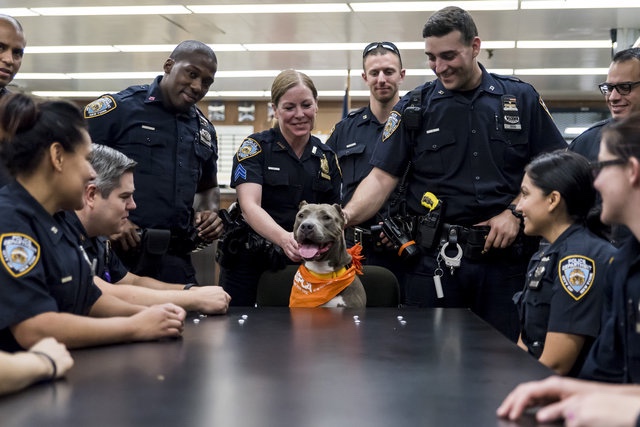 Jamie at the 20th Precinct, during her special day out (ASPCA)

Zaza was adopted by Stacey Richman—who also renamed her Dani—after she went with her company to volunteer at the ASPCA. "I wasn't honestly expecting to adopt... I just saw this dog, and that was all she wrote. I needed her. You could say it was fate. I really believe she and I were meant to find one another. I couldn't be more grateful for the day if I tried. She's the best thing to happen to me," she said.

Einat Lapidot and her husband Matt Winum are Jamie's new humans and recalled, "We had wanted to adopt for awhile, and when we walked into the ASPCA to look, we knew we wanted to rescue a dog that had the slimmest chances of finding a home. [She] had been in the Adoption Center awhile, and the minute we met her, we knew she was meant to be with us!"

They also renamed Jamie "Lucinda." Lapidot added, "She's also completely changed our perceptions of pit bulls. Lucinda is sweet and gentle. We're so happy to have her in our lives!"

Richman and Lapidot also plan to have Dani and and Lucinda meet up again. Lapidot said, "We were as happy as Lucinda to see her playing and having a good time," while Richman said, "It would be unfair at this point not to. It's clear it brings them such joy, and I will do anything to make my baby happy."

"Dani and Lucinda's story is an incredible example of how dogs can overcome past tragedy to become loving companions," said Howard Lawrence, Vice President, ASPCA Humane Law Enforcement. "Their reunion was made possible through the ASPCA's partnership with the NYPD and the generosity of adopters opening their homes and hearts to canine cruelty victims. We encourage everyone to always make adoption their first option."