This city was built on and around what is now referred to as Manhattan Schist, a tough old rock that has essentially become the backbone of the island. There are plenty of places to spot the stuff above ground, like Central Park, and below, just look out the window of your subway car. It's also highly visible in the "secret" sub-basement of Grand Central Terminal, accessed via a long staircase created with the help of dynamite long ago.

One of the more visually compelling spots to find it, however, is in Morningside Heights on 114th Street, between Broadway and Riverside Drive (map). Here you'll find a giant boulder—around 30-feet high and 100-feet long—that sits almost flush against two apartment buildings.

Some locals have called it "Rat Rock," which is also the nickname given to the giant piece of schist in Central Park—apparently rats like to congregate on and nest in these boulders. 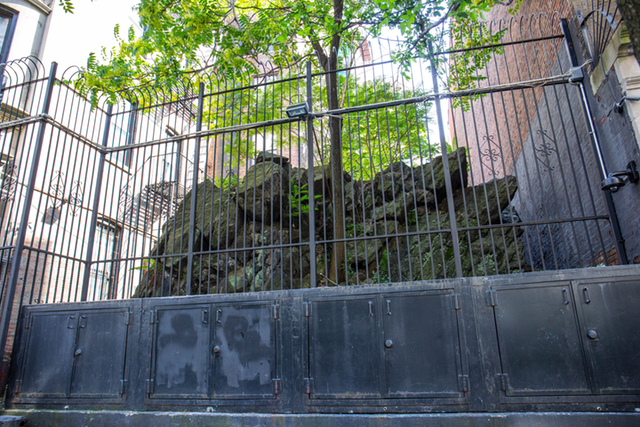 In 2000, the NY Times called it "one of the city's most amazing natural wonders."

They also noted that, yes, "the lot and development rights are incredibly valuable, but removing the rock could cost hundreds of thousands of dollars." William Scott, then the vice president for institutional real estate at Columbia University, told the paper, "When the row houses were built around it in 1896, leaving the rock was no big deal because there were hundreds of acres to develop. But now, it's just this huge ugly rock in the middle of our neighborhood." Columbia still owns the land (and most of 114th Street), and still has no plans to remove the rock.

You can still find a large rock on Bennett Avenue between 181st and 184th Streets, too, but for a look at some previous pieces of schist that needed to be destroyed, check out this old image from 1861, of a house on 2nd Avenue near 42nd Street. The description accompanying the lithograph explains that as our city's grid was being made, "Houses were left up in the air as the streets and avenues were cut through the hills. A significant number of buildings had already been demolished to make way for the city’s thoroughfares, and those that remained would soon be swept aside by what one commentator referred to as the 'leveling hand of improvement.'" 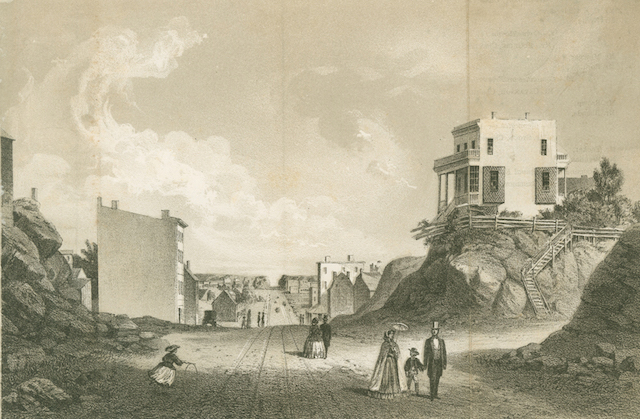 According to the American Museum of Natural History, "New York City is primarily composed of sediments that were metamorphosed during the Taconic and Acadian orogenies roughly 500 million years ago. Garnets can be found in the rocks of the Hartland Formation and Manhattan Schist... It is in these hard rocks that the city skyscrapers have their foundations." This is also why—before more modern technology was developed—most skyscrapers were built downtown and in Midtown, where the schist bedrock was nearer the surface and could support the buildings.

Professor Iain Stewart, a geologist at Plymouth University, told BBC that the mineral kyanite is commonly seen in the Manhattan schist: "Kyanite is a key mineral to identify, we know it only forms at very deep depths and under extensive pressure. It's like a fingerprint, revealing a wealth of information." And its presence means that the city's schist "was compressed under incredibly high pressure over 300 million years ago... formed as a result of two enormous landmasses coming together to form a supercontinent, known as Pangaea," with mountain ranges "15 times higher than the highest skyscraper on the skyline today. Being buried and compressed under such a vast mountain range has made the Manhattan schist an exceptionally hard rock." 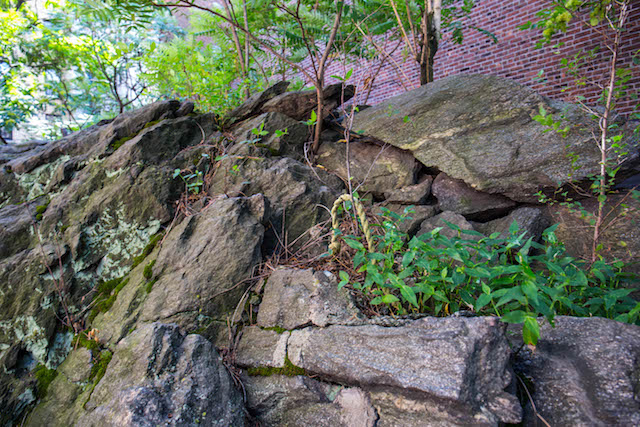 When the ancient continent split, the schist was left behind in the area that would become New York City, and this particular piece has become an odd vision on modern day West 114th Street, and a powerful artifact from an event that occurred many millions of years ago.

#bedrock
#boulder
#history
#manhattan schist
#rat rock
#rock
#original
Do you know the scoop? Comment below or Send us a Tip