This Cat Was The NYC Subway Etiquette Mascot In The 1960s

You've probably seen those old Subway Sun etiquette posters from the 1940s, but that wasn't the only etiquette campaign that's run on the city's trains. Meet Etti-Cat, the Transit Authority's odd mascot of good manners, who was introduced in 1962, around the same time marijuana use was on the rise. 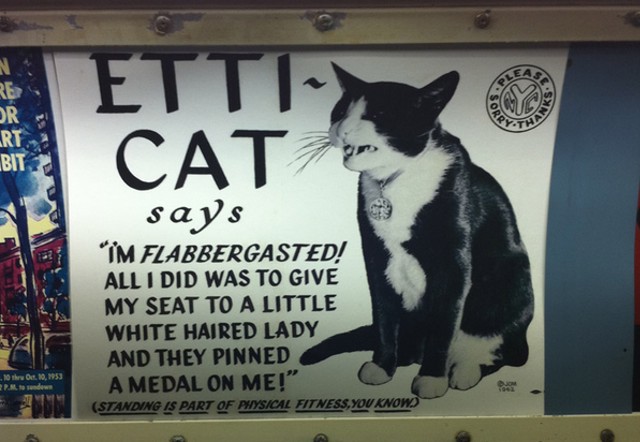 Prior to the campaign launch, the NY Times reported that Etti-Cat would appear in about 3,000 subway cars, and is "portrayed as a most polite creature advocating the authority's campaign for courtesy. The first picture will be succeeded by others calculated to discourage defacement of walls and posters. The first shows Etti-Cat with his mouth open, as though speaking." Etti-Cat was not a fan of brevity... 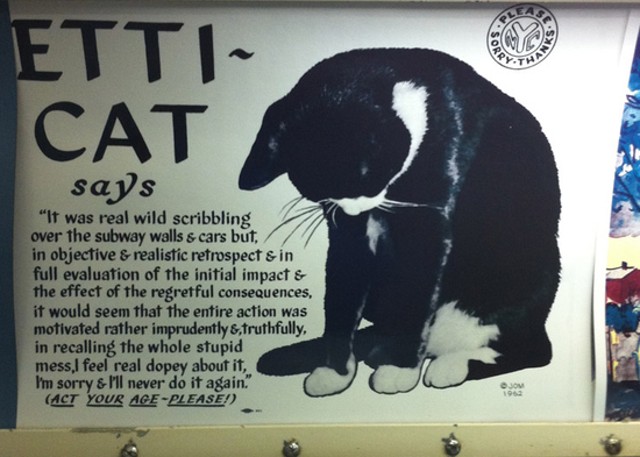 Was Etti-Cat real? Was it kept in the G train portal? What do we know about Etti-Cat? Not much... the Times noted that when they asked the authority spokesman if the cat was real, they were pointed to the authority's official announcement, which said: "Charles L. Patterson, T.A. Chairman, indicated that if Etti-Cat is adopted by the public he will hold a news conference for the pet so that riders can learn more about the new subway mascot."

Etti-Cat (who also authored a book about etiquette outside of the subway system) was never heard from again... but does live on at the Transit Museum—ask about him/her at their etiquette event later this month!