And as we wind down our Halloween coverage for 2018, we'd like to highlight possibly the most charming, heartwarming costume we've seen this year: meet Harry, the "ultimate MTA fanboy." He's a 6-year-old who uses a wheelchair and loves the mass transit organization so much, his loving mother built him a M96 Crosstown Bus of his own.

"Getting around the city can be challenging at times with the lack of accessible routes, but while most people would find it an inconvenience, he sees it as an adventure!" said mom Jasmine Tay. The M96 is Harry's favorite bus because it takes him to school, and his favorite thing about the MTA is "the buses with the elevators. He thinks it's cool that the stairs turn into an elevator."

Harry and his family went trick-or-treating around the Upper East Side last night, and got a lot of great responses to his costume: "Everyone living in the city can relate to MTA buses, no matter what age you are," Tay said. "I think last night showed that we all have a love/hate relationship with them! At one point he actually got a round of applause from a bunch of people. I think the great thing was that he was seen as just another kid with an awesome costume, but when people realized that it was built around his wheelchair, that then took it to another level of appreciation!" They also visited the bus stop to let the drivers check it out as well. 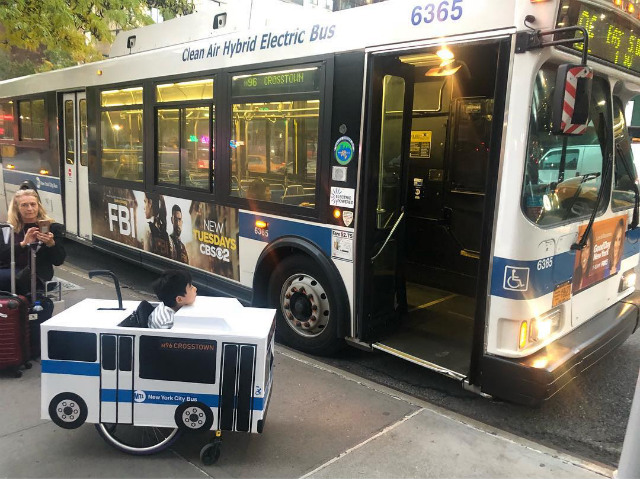 The MTA has struggled to address accessibility issues—roughly 80 percent of the city's 472 subway stations are inaccessible to people with disabilities, and half of the city's neighborhoods are "ADA Transit Deserts" that lack a single subway station that is accessible. The MTA has also faced multiple lawsuits arguing that they're not doing enough to maintain elevator service or make more stations accessible.

Tay noted that the lack of accessibility throughout the city can affect Harry's daily life, though the community support has been very good:

Like many other families, a big part of the reason for why we live in NYC is the vast amount of opportunities it has to help our children learn and grow. Great schools, great cultural institutions, great people watching etc. It is unfair, and frustrating that your child's access to these opportunities may be limited to due to something as simple as a ramp. An elevator. A working elevator. A space wide enough to use a wheelchair. That being said, the community support and advocacy for these issues is there. From the crossing guard and bus drivers looking out for us and getting us from A to B, to the organizations like the ARISE Coalition who successfully advocated for improving school accessibility ($150m got approved recently).

Oh, and Harry loves the subways as well—he dressed up as the Q train last year, because he was obsessed with it when it first opened. 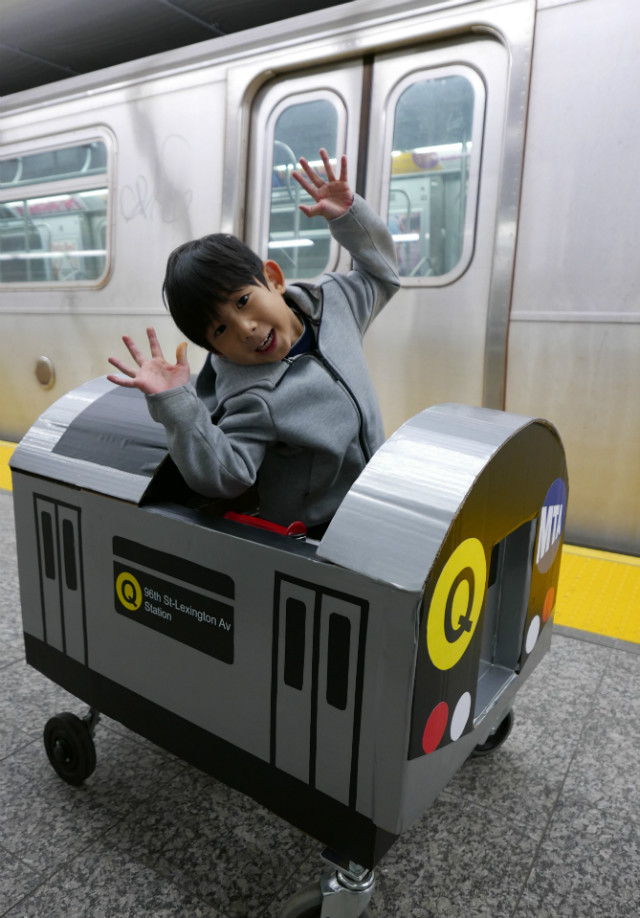 #aww
#best costume ever
#halloween
#MTA
#original
Do you know the scoop? Comment below or Send us a Tip