This Beautiful Mourning Attire Is Coming To Met's Costume Institute

(Courtesy of the Metropolitan Museum of Art)

For the first time in 7 years, the Metropolitan Museum of Art's Costume Institute will host a fall exhibition, which will be on view this October (through February 2015) at the Anna Wintour Costume Center. Today the museum announced the exhibition—called Death Becomes Her: A Century of Mourning Attire—noting that it "will explore the aesthetic development and cultural implications of mourning fashions of the 19th and early 20th centuries."

The collection is made up of approximately 30 ensembles, some never before exhibited, which will "reveal the impact of high-fashion standards on the sartorial dictates of bereavement rituals as they evolved over a century." 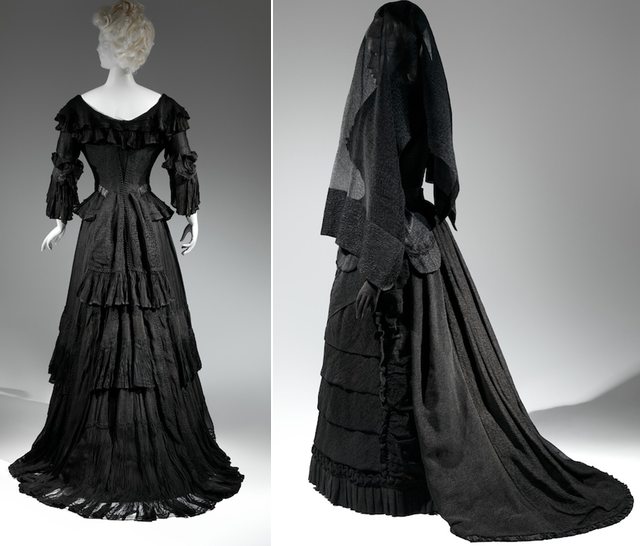 (Courtesy of the Metropolitan Museum of Art)

Harold Koda, Curator in Charge of The Costume Institute, explained the exhibition further: "The predominantly black palette of mourning dramatizes the evolution of period silhouettes and the increasing absorption of fashion ideals into this most codified of etiquettes. The veiled widow could elicit sympathy as well as predatory male advances. As a woman of sexual experience without marital constraints, she was often imagined as a potential threat to the social order."

#costume center
#costume institute
#death becomes her
#metropolitan museum of art
#Mourning
#the met
Do you know the scoop? Comment below or Send us a Tip
A new Gothamist is coming! We’ve moved comments over to our beta site. Click here to join the conversation and get a preview of our new website.