Getty Images says an infrared camera was used here but also this is what humans look like once their souls have been absorbed by Penn Station.

Penn Station is a terrible place to spend any of your time. Situated in the city's Hellmouth District, it is a portal to an alternate universe wherein all of the terrible things you've ever heard about New York City are located, suspended in time, hanging in the air, and eating your soul.

The exterior of the building is far less inviting than any other train station we have ever been to, but rarely is the terribleness of its outsides given as much attention as its insides. Both, however, are basically telling you to GTFO of there—go back from whence you came. Do not enter. Run.

But now there are wooden steps to sit on and it's changing everything. 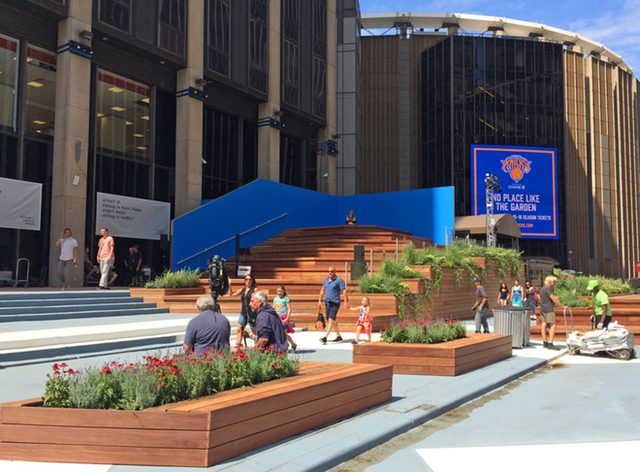 Plaza33, a temporary pedestrian plaza, opened to the public today. Located on the east side of 33rd Street between 7th and 8th Avenues, the plaza "invites you to sit, to dine, and to enjoy" in the public amphitheater. There will be free Wi-Fi, performances, fitness workshops, movies and games. But only until October, then it will be taken away and everything good will feel like a dream.

Before that, however, more will come, and on a more permanent level: on August 17th, Penn Plates will open, featuring eateries such as Taco Bono, Jicama California Street Food and Black Iron Burger. In addition, just a block west, in the outdoor garden at 333 West 33rd Street, "a highly curated food truck park called Shipping & Receiving" will open. 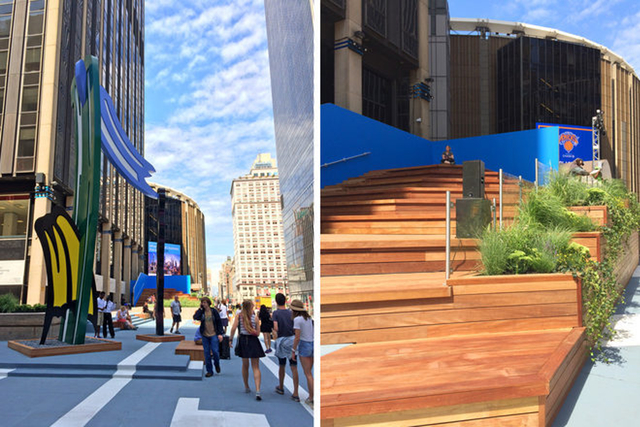 The former loading dock, located steps away from Penn Station & Madison Square Garden and adjacent to the splendor of the Farley Building (the future home of Moynihan Station), Shipping & Receiving will be a place to gather, cocktail, play and enjoy a quick lunch, happy hour hang or pre-show bite from a choice of carefully curated truck experiences. The trucks will rotate with exciting selections driving up each day. A custom built Citroen Bar/Food Truck will permanently reside at Shipping & Receiving, and will offer artisanal food pairings with delicious beers, cocktails and wines.

One Area Man experienced the change today, and told us, "The new plaza is a HUGE upgrade. Not just noise/space, but that row on 32nd is where airport buses used to idle, so now I can breathe when I get out of the subway." Also, Curbed notes that those wooden benches double as planters, and the sculptures you see are by Keith Haring and Roy Lichtenstein.

Okay fine, now do this to Port Authority.