Photographer Zev Schmitz has been visually documenting the city from its waterways, namely the East and Hudson Rivers, while swimming. "It's a really unique interpretation of NYC and reveals a lot of architecture I’ve never seen before," he told us.

Schmitz added that his series, called Island of Manhattan, "aims to recontextualize New York City by moving away from the rich language of the street photography we know so well, and framing Manhattan as the geographic island that it has always been. From the water surrounding the island, new perspectives of the urban jungle appear. The architecture is juxtaposed with unfamiliar buildings and spaces rarely seen reveal themselves above splashing waves." 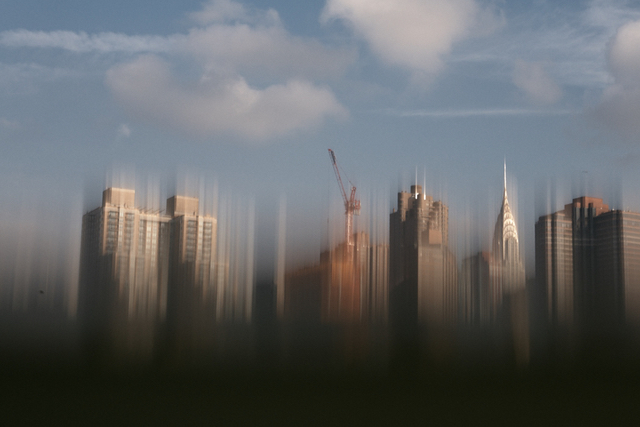 How has he pulled off photographing while submerged in water? "While the fast moving cold current and underwater camera housing caused difficulties in shooting, the commuter ferries, barges, and frequent stops by the NYPD and U.S. Coast Guard were the real challenges for this work. You’re certainly not supposed to swim in the river, this was a pretty big risk." He also told us that the water isn't very clean (mostly debris is spotted while swimming through it), but it's "safe enough to go in except in the days after a big rain."

Click through for a look at what he's captured, since you'll likely never see this viewpoint yourself.

#east river
#hudson river
#photography
#zev schmitz
#original
Do you know the scoop? Comment below or Send us a Tip
A new Gothamist is coming! We’ve moved comments over to our beta site. Click here to join the conversation and get a preview of our new website.