These Giant Eggs Are Hiding Around The 5 Boroughs

Currently there are a ton of giant eggs sitting around the city waiting to be discovered—this is part of the Fabergé Big Egg Hunt, which officially begins tomorrow. It's like those cows, but with eggs, and with an interactive element. The fauxberge eggs were created by different creatives that you may or may not know, including Caroline Herrera, D*Face, Naeem Khan, and Ralph Lauren. And here's how the interactive part of the public art display works:

"The initiative will see over 260 large egg sculptures, each designed by globally renowned artists, designers, architects, photographers and brands placed throughout the five boroughs from April 1st to 17th, 2014. The Hunt will benefit conservation organization, Elephant Family and Studio in a School, a program that brings visual arts to New York City’s public schools."

To participate, you'll have to download an app "which can be used to reveal egg locations across the city. Checking in at each egg will enter hunters in a sweepstakes to win one of three extraordinary precious gemstone pendants created by Fabergé." Just like you're a goddamn Russian Czar.

We spotted a handful this morning by Jane Carousel in DUMBO, and would like to make a request that photo op public art does not get placed in front of the Verizon Building, ever. It ruins EVERYTHING: 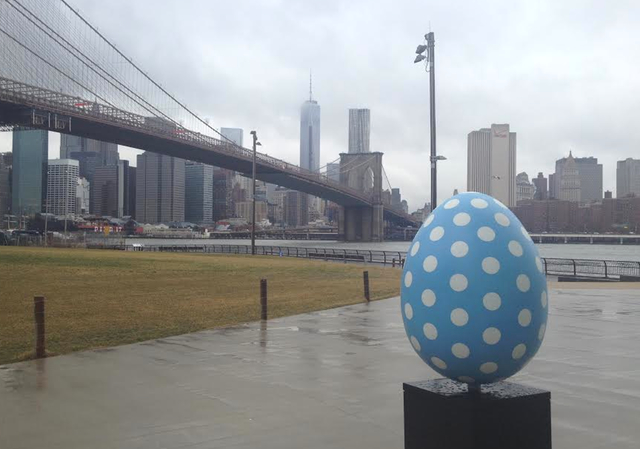 #egg hunt
#eggs
#faberge eggs
#public art
Do you know the scoop? Comment below or Send us a Tip