These Female Sexuality Ads Are Apparently Too Racy For The Subway

If you've been unlucky enough to be on the subway surrounded by those creepy new Roman erectile dysfunction ads, then you know the MTA is comfortable with a certain amount of racy advertising material. But there is a line in the sand—and that line is apparently any ads that cater more directly to female sexuality.

Unbound, a sexual wellness company aimed at "educating and empowering women to own their sexuality" (and who make sex toys and accessories), submitted a series of new ads to Outfront, the company that manages MTA advertising. Two days after those Roman ED ads took over Grand Central, Outfront rejected the Unbound ads.

Unlike the Roman ads, which are mostly text-based, Unbound worked with five female artists (Laura Callaghan, Loveis Wise, Kristen Liu-Wong, Robin Eisenberg, and Yoko Honda) to create artwork with very little text for their campaign. There is no nudity, and only a few discreet images of sex toys. You can see one of them above, and four of them below: 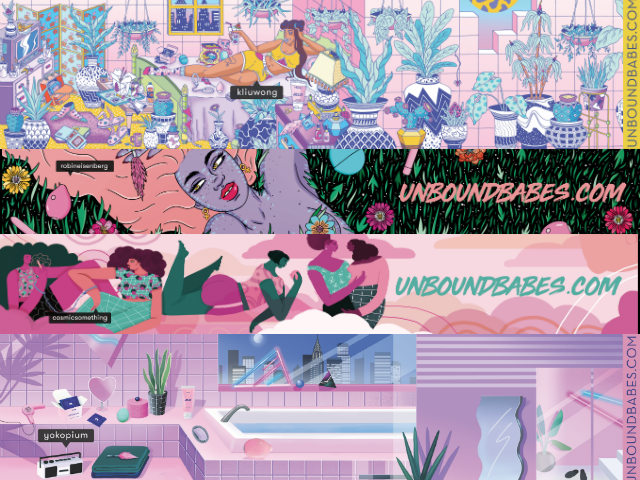 "We’re disappointed by the MTA for banning sexual wellness companies that cater to women and femme-identifying individuals from paying to advertise," said Polly Rodriguez, the CEO of Unbound. "It’s a uniquely visible platform that’s hard to replicate via any other initiative. They now join the ranks of organizations like Facebook, Instagram, Snapchat and Pinterest—all of which also ban advertising from companies like ours."

According to emails between the two companies, an Outfront representative told Unbound that the company believed that the ads "would not be approved under MTA guidelines," citing two clauses in the MTA’s ad policy which prohibit "the dissemination of indecent material to minors" and the "public display of offensive sexual material." The Outfront rep did not offer any suggestions on how the ads could be modified to be accepted.

"First of all, WHAT THE FUCK MTA," artist Loveis Wise wrote on Instagram today. "Can you believe a beautiful campaign created to show sex positivity and self love without being overtly sexual I might add, got rejected IN 2018 for 'sexually obscene material' but a campaign about mens erectile dysfunction can still be placed in the subway or any public spaces?" 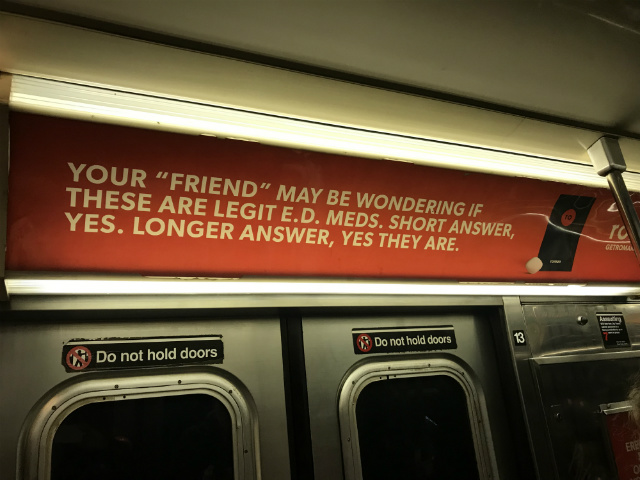 One of the Roman ads (via Unbound)

Unbound argue that if brands like Roman can "blatantly display male sexuality" in their advertisements—not to mention racy ads from the likes of The Museum of Sex and the other ads promoting breast augmentation—Unbound shouldn't be treated differently. "The common defense is that Roman, and companies like it, are addressing a health concern, but we feel strongly that ignoring female sexuality is also a health concern, and that it's a slippery slope to allow the MTA to define what 'sexual health' means," said Unbound spokesperson Gabrielle Pedriani. 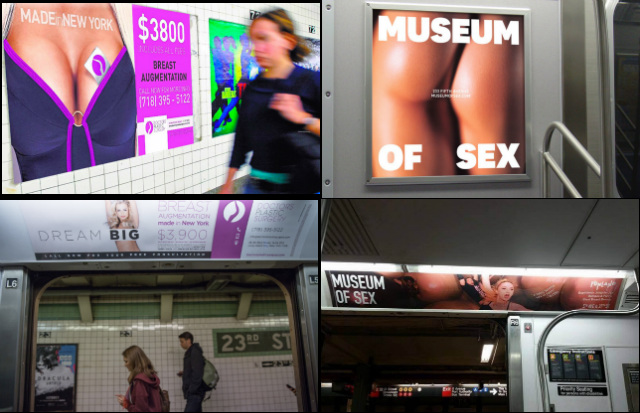 Examples of other racy subway ads (via Unbound)

"Unbound has tried everything to get in touch with the MTA on this, but they just defer to Outfront, who handles the approvals/rejections for ads on the MTA's behalf," she added. The situation brings to mind a similar subway ad controversy in 2015, when menstrual underwear company Thinx had their ad campaign rejected due to "inappropriate" imagery and language. Eventually, the MTA stepped in and approved the ads over Outfront's hesitations.

We're reached out to representatives from Outfront and the MTA for comment on this ad campaign, and will update when we hear back from them.

#ads
#MTA
#roman
#subway
#train
#unbound
#upfront
#women
#original
Do you know the scoop? Comment below or Send us a Tip
A new Gothamist is coming! We’ve moved comments over to our beta site. Click here to join the conversation and get a preview of our new website.