These Are The Herbal Cigarettes They Smoke On Mad Men

At the Mad Men Q&A at the Paley Center earlier this week, the cast discussed smoking on the show, noting they smoke herbal cigarettes made of "rose petals, marshmallow... no nicotine or tar." It's always been known they aren't puffing down real Lucky Strikes, but what is their herbal brand of choice? There are a few options out there but we were told by the folks at Mad Men today that their brand is Ecstacy. 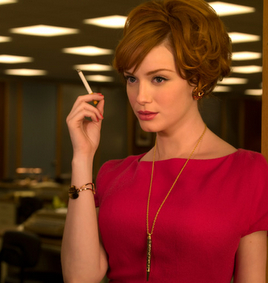 There's actually no mention of marshmallows in Ecstacy herbal cigs, although the Honeyrose brand does offer herbal smokes with "marshmallow leaves and rose petals." And while Ecstacy touts their "all-natural herbs that are 100% tobacco and nicotine free" as a "terrific substitute for tobacco and great for anyone looking to quit smoking," keep in mind that smoking anything is worse for you than smoking nothing (end PSA). From the Q&A on Tuesday:

Brian Williams: What is in the cigarettes you guys love smoking?
John Slattery: …fake cigarettes…those are herbal cigarettes, who knows what’s in them…rose petals, marshmallows, I don’t know.
January Jones: I found a piece of plastic in one…
JS: (pointing) Plastic, very healthy.
BW: But you inhale a lot!
John Hamm: Yeah, there’s just no nicotine or tar…which makes them VERY healthy.
(laughter)
BW: Because you guys probably inhale cumulatively 80,000 of them each!
JH: Yeah, we should really own stock in the company.

Last year Jon Hamm discussed his character's smoking habit in an interview, claiming that he smoked 74 cigarettes while shooting the pilot alone—“You have to remember, though, that shooting a scene is not shooting one take of a scene. It’s four or five setups, and three or four takes on each setup. So every time you see me light a cigarette, I do it five, six, seven, eight, nine, 10 times." As a result, he said, “You can hear from my voice that it’s a debilitating endeavour. We’re going for verisimilitude, though. People did smoke. And it creates a mood on the show." At Tuesday's Q&A, the cast mentioned that the cigarettes are burned down for them to the exact point they need to be at when shooting a scene—so at least they aren't frantically huffing a new one down each take.

To look further into whether there can be a lesser of two evils here, we plan on sticking Chris Robbins into a room with a carton of these and a direct line to the FDA until he comes out with a long form article on herbal cigarettes, à la his informative e-cigarettes piece.

#cigarettes
#ecstacy
#herbal cigarettes
#mad men
#original
Do you know the scoop? Comment below or Send us a Tip