When graffiti taggers and urban explorers visit the abandoned, never-completed subway platform underneath Brooklyn's Nevins Street station, they usually keep their trespassing a secret. That's part of what makes artist Phil America's new exhibition, The Perilous Fight, such a bold and moving statement. Comprised of homemade flags hung in tribute to the victims of nationwide gun violence, the show is contained entirely inside the abandoned platform. If you want to see it, you'll have to run down live train track, which the MTA obviously does not recommend.

"There's so much unused space in NYC, especially underground, so I figured it would be interesting to reclaim some of that space in the name of art," America told Curbed. Each piece features different gun designs embroidered onto cloth flags, and some contain museum-style information cards. America's gallery space for no one is, in another way, for anyone, and placing his flags beneath Nevins Street invalidates the city's art world gatekeepers, showing that creative, activist statements can—and perhaps should—be made in unsanctioned space. It's a bit like Underbelly in a smaller, more concentrated form. 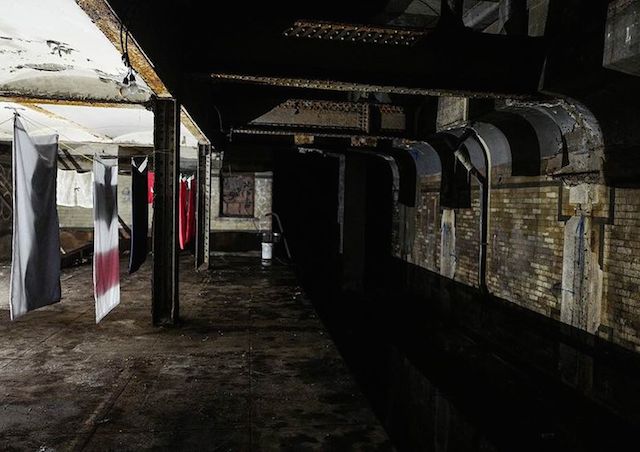 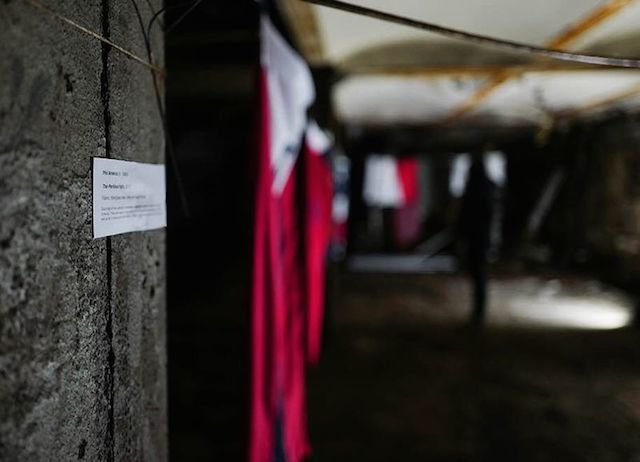 Gothamist reached out to the MTA for comment on the illicit gallery, but did not receive a response. We're guessing it won't be there much longer.

On his website, America describes the flags as "a tribute, a memory, and a reminder; they are the promise that those lost in these terrible events are not forgotten. They serve to remind that gun violence in America is so prevalent that it has become a part of our national identity."

In the same interview, America claimed to be fully aware of the logistic and legal difficulties of hosting The Perilous Fight in the MTA's unkempt backyard. "The people I'd be worried about finding it already know it's there, so at this point I don't know if it matters much. The burden of proof is on them to prove I went down there and if they truly want to prosecute me for trespassing to an unused space to show artwork commemorating lives lost to mass shootings, they will."

#Phil America
#street art
#subway
#The Perilous Fight
#Underbelly
Do you know the scoop? Comment below or Send us a Tip