There's An Abandoned Castle On An Island Near NYC, Here's How To Get There Around a century ago, you could purchase military-grade weapons on a picturesque island located in the Hudson River, not far from Manhattan.

The uninhabited, 6.5-acre rock-heavy island, called Pollepel, has suffered from its fair share of explosions, fire, and neglect. It's best known for its ruined castles, which were home to Francis Bannerman and his massive military surplus business, all housed on the island for decades and still spotted by those on passing MetroNorth trains. But before all that Pollepel Island was home to Native Americans, colonial trappers, smugglers, traders and prostitutes. Some of whom believed the island to be haunted.

A recent art installation by Melissa McGill, called Constellation, is running through next year, and is meant to highlight Native American ties to the island. The Lenape were the tribe indigenous to the area, and McGill was determined to incorporate their relationship with the island into her project. When she sat down with Hadrien Coumans, a director at the Lenape Center, and showed him a rough sketch of the project she envisioned, he immediately turned to her and said, “You’re making Opi Temakan.” Opi Temakan is the Lenape word for “white road” or “milky way,” a term for the path which connects our world to the next. From that early meeting on, Coumans and McGill worked closely in developing the project, which aims to create a bridge between the Lenape history and that of the Bannerman era.

The installation itself is composed of 17 LED fixtures atop metal poles which blink to life as the sun sets. This man-made constellation peeks through the crumbling ruins of Bannerman Castle and blends seamlessly with the night sky. The poles are painted to blend with their surroundings, and as the light fades the lights become indistinguishable from the real stars around it. The water, the island, and the looming ruins of Bannerman castle are as much a part of the project as the light fixtures themselves.

The project is subtle, and can be seen best from a boat circling the island—here it is on a recent trip just after sunset: 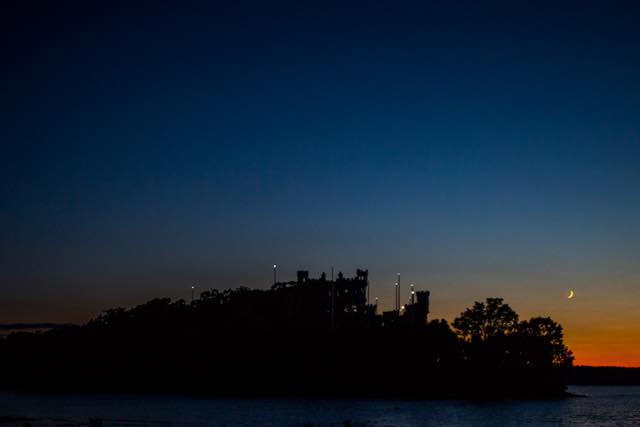 The installation as seen from the ferry, more in the gallery above. (Chris Jones/Gothamist)

Since the American Revolution, there have been five owners of the island: William Van Wyck of Fishkill, Mary G. Taft of Cornwall, Francis Bannerman of Brooklyn, and The Jackson Hole Preserve (Rockefeller Foundation), which donated the island to the people of the State of New York. It's Bannerman who brought the castle structures to the island, which set it apart from any other in the Hudson.

Francis Bannerman was a Scottish immigrant to New York, and ran that aforementioned military surplus business, which was forced out of its 501 Broadway address in the early 1900s given the danger of storing ammunition in a storefront. Once on the island, he designed a castle and separate living residence stylized after his memories of castles in Scotland.

About ten years after he purchased the island, some stored ammunition exploded in the castle, but the business kept going after some rebuilding.

"[In] the late 1950s... the Castle was cleared of military surplus and live munitions were deactivated. Although a mishap or two occurred during the years of active operation, including the powder house explosion of 1920, it was not until after the State of New York purchased the Island in 1967 and a fire of undetermined origin in 1969 that the buildings fell into their present state of ruin." 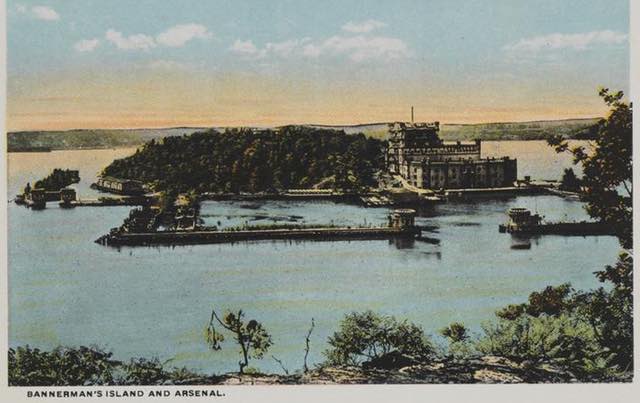 The New York State Parks Department started giving tours in 1968. The following year, however, a fire took out the floors and roof of the castle, and the island was made off-limits to the public... but not for good. The Bannerman Trust Foundation began a ferry service and tours of the island in the 2007, and locals had been visiting through that service (or on canoes and kayaks) ever since.

According to the Wall Street Journal, by 2014 the castle had "experienced a string of calamities since it was built in the early 1900s," more recently suffering from damage brought on by storms. Trustees have been trying to preserve the ruins, and Neil Caplan, founder of Bannerman Castle Trust, told them: "We're doing our best to save what we've got and keep going. For a little not-for-profit, we're like the little engine that could."

How to get there: While some of the walls have been stabilized, the Bannerman Castle Trust is always accepting donations so they can do more work, and the most fun way to contribute is by visiting. They host a variety of tours (walking, self-guided, or via kayak or ferry) through the end of October, as well a series of events (calendar here). From NYC, you'll need to get yourself to Beacon (kayak or passenger boat), Cold Spring (kayak), Cornwall-on-Hudson (kayak), or Newburgh (passenger boat) via MetroNorth. Tickets to get to the island cost around $35.

#bannerman castle
#bannerman's island
#constellation
#Pollepel island
#original
Do you know the scoop? Comment below or Send us a Tip