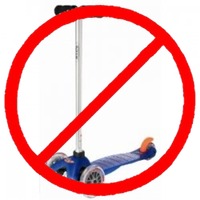 You may remember back in 2010 when New Yorkers were suffering from a horrible new trend in which parents would take their babies to bars. Adult bars. And just let them run around and scream like babies inside the bar, where baby-free adults were trying to escape real life at the bottom of an artisanal cocktail served in a mason jar. Just as that false sense that everything is going to be okay would set in, a child would be there to ruin it. And it's not just bars—these reckless monsters have now taken over our sidewalks.

Parents (in particular: all of the parents in Brooklyn) have been purchasing their kids scooters, which is adorable if you live in the suburbs... but on the small sidewalks of New York? We're already battling overcrowding and bewildered tourists who won't stay in their lanes. And even if we install child scooter lanes, you know these speed-addicted beasts aren't going to abide by them.

The trend becomes a living nightmare when the kids are scooting in groups with their parents trailing behind, barely paying attention as their bundles of joy barrel straight towards pedestrians like torpedoes. The target—a.k.a. you, the adult pedestrian who simply wants to stroll along and listen your podcast or whatever—is suddenly forced into a haphazardly choreographed Dance of Danger in order to avoid the wheeled terrors.

It may seem like a slight inconvenience to some, but there are so many things that could go horribly wrong here—it's a million accidents waiting to happen! You could fall and break a hip! For that reason and more, we're using our vast and infinite power to call upon the City of New York to BAN THE SCOOTER! And while we're at it, ban the adult scooter as well.