There Are Nearly 150 Historical Male Statues In NYC, And Only 5 Female Statues With over 1,000 monuments, New York’s collection of public statuary is extensive, at turns impressive and contentious, and, according to the city, “the greatest outdoor public art museum in the United States.” It is also almost exclusively in tribute to dead men. While there are around 145 statues honoring historical male figures spread across the five boroughs, you can count on one hand the number of historical females represented—there’s Joan of Arc, Golda Meir, Gertrude Stein, Eleanor Roosevelt, and, most recently, Har­riet Tubman.

In Central Park, the most-visited urban park in the country, there are 23 historical male statues, but the sole female representations are either fictional characters, like Alice and Mother Goose, or nameless props, like nymphs and angels.

A nonprofit group called the Elizabeth Cady Stanton and Susan B. Anthony Statue Fund is looking to rectify this centuries-old imbalance by lobbying the city to place a monument to the two suffragists at the West 77th Street entrance to Central Park. Over the past few years, the small grassroots campaign has grown into a high-profile movement, and the fund now draws support from an enterprising Girl Scout troop, as well as First Lady of NYC Chirlane McCray, who told us: “New York City is home to some of the most significant figures in civil rights history, and stands proudly as a beacon of progress for feminists all around the world. It is long past time for these important women to be honored in a space for all the world to witness—especially a space as quintessentially New York as Central Park.”

Still, the Stanton/Anthony statue project, which was rejected several times before finally winning approval in 2015, is years from completion—the group is aiming for August 26th, 2020, the centennial of the 19th Amendment granting women the right to vote. But while Central Park’s bronze ceiling remains unshattered, the project’s winding path through the city’s maze of public art bureaucracies can offer several insights—and surprises!—about the process by which a statue is erected in New York.

The primary gatekeeper here is the Department of Parks and Recreation, the city agency responsible for 30,000 acres of land on which 1,200 statues and monuments stand. Any person or group seeking to erect a permanent artwork on this land must first gain the department’s written consent, a process that begins with a boardroom presentation. For the Stanton/Anthony statue, that initial presentation did not go so well, according to those advocating for it.

“If you want to hear 40 different ways of saying no, you should've been at this meeting,” said Coline Jenkins, vice president of the Statue Fund and the great-great-granddaughter of Elizabeth Cady Stanton. “One gentleman told me, ‘You don't want a statue.’ And I turned and I asked the man, 'Since you know what we want, please tell me what we want.’ And he says, ‘Well what you want is a garden, and we'll call it the women's garden!’” 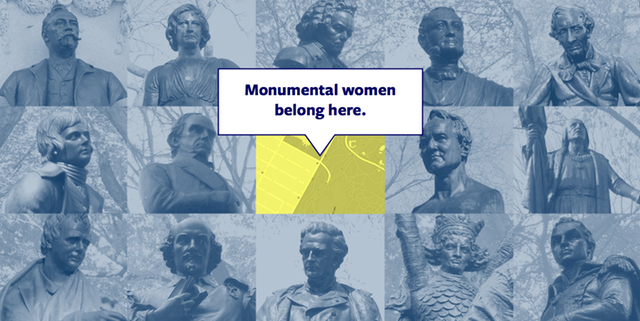 The first problem, as explained to Jenkins by the Parks Department, was a policy from the 1950s that prevented new monuments from going up in Central Park. But if the policy was really a deal-breaker, she countered, how did a statue of NYC marathon-founder Fred Lebow get approval in 2001?

Along with Jenkins, the other driving force behind the movement is Pam Elam, a retired city government executive. The women say their relationship resembles the fifty-year partnership between the two suffragists they’re seeking to honor—Jenkins, like Stanton, is the big picture philosopher; Elam, like Anthony, is the pragmatic political thinker, the “Napoleon.”

“When you dig a little deeper, you find that’s not really a written rule anywhere,” said Elam. “It's just a moratorium that was self-activated by some Parks Department employees, so it can be changed. It's helpful to have a background in city government to know when you're dealing with hard and fast rules and when you're dealing with movable policies.”

Elam also has a background studying Women’s History at Sarah Lawrence, which helped her with one of the process’s non-movable policies: that historical figures have a literal connection to the site of their statues. Although Stanton and Anthony have a deep connection to the city—they founded the National Woman Suffrage Association here in 1869 and spent four years publishing a weekly newspaper called The Revolution just down the block from City Hall—their relationship to Central Park was a bit harder to prove. After hours of archival digging, Elam was able to surface evidence of Anthony’s regular walks across the park to visit Stanton’s Upper West Side apartment.

The thematic association between site and subject is just one of six factors—along with compatibility, impact on park use, aesthetics, maintenance, and safety—considered by the Parks Department in deciding whether or not to grant approval to a public monument. These guidelines date back to 1860 and have a “fairly high threshold,” according to Jonathan Kuhn, director of art and antiquities for the Parks Department. The difficulty of satisfying the requirements explains why permanent monument projects take a minimum of three to five years to complete, and often more. The Frederick Douglass statue in Harlem, for example, was conceived of in 1995 and took 16 years to complete.

While Kuhn acknowledged that the approval process may be challenging for outsiders, he rejected the notion that the longstanding system should be streamlined. “Given the eternal nature of these subjects and the fact that they live on public land, it's not appropriate for them to go up quite suddenly,” he said. “It should take some time, and there should be space for deliberation and consideration when we're creating a monument.”

After quite a bit of deliberation, the Stanton/Anthony statue finally received written approval from the city in May of 2015. The reversal came after Jenkins confronted the newly appointed parks commissioner, Mitchell Silver, during a speech at Pratt Institute. “How can that park exist for 150 years and not recognize half the population?” Jenkins recalled asking. "We made an argument that was irrefutable, and fortunately [Silver] understood it and took down the sign that said 'Women Need Not Apply.'"

With the issue of Parks Department approval behind them, the next step for the Statue Fund will be soliciting proposals from sculptors, then forming a jury to select a winner of the open competition. Once a proposal is selected, it must be approved by the Public Design Commission (formerly the Arts Commission), an 11-member body made up of professional artists and laypeople, as well representatives of the Brooklyn Museum, Metropolitan Museum, New York Public Library, and the Mayor.

While it was once common for projects to die in this step, the commission hasn’t issued an outright rejection in at least 30 years. “In the old days, sometimes the Parks Department would advance proposals it may not have favored (or felt neutral about), so that the Art Commission would be the ones to reject it rather than the Parks Department,” Kuhn explained. The two agencies have become much more collaborative since the 1980s, he added, “which has produced a more collegial process and avoided wasting people's time, effort and money.”

The final and perhaps most challenging step is fundraising. Virtually all public art is paid for with private money—this is another longstanding tradition, dating back to the city’s first public statue of George Washington in Union Square. On rare occasions, a statue is financed by the Department of Cultural Affairs Percent for Art Program, which allocates 1% of the city’s construction budget toward art and design projects. Recent Percent for Art projects include the 2008 Harriet Tubman statue in Harlem, and a controversial bright pink sculpture erected in Long Island City last year.

While the Stanton/Anthony statue campaign won’t receive any taxpayer money, both Jenkins and Elam say the fundraising process is moving along nicely. Two months ago, the fund received a $500,000 grant from the New York Life insurance company, which puts them about halfway toward their total goal of $1.5 million dollars. The money will cover the statue’s construction and maintenance, along with an educational campaign focused on the history of the suffragists. 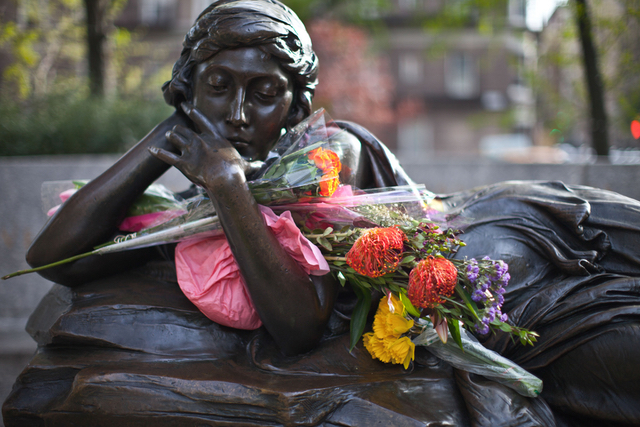 Audrey Munson, "America's First Supermodel," is the woman who appears in many of NYC's statues. This one, at West 106th Street, is a memorial to husband and wife Isidor and Ida Straus who died on the Titantic. The statue is in memory of them, but depicts a nymph. (Photo by Nicholas Noyes)

“We want to not only honor the women but tell the story and use it as an example of how social change comes about,” Elam said. Elam also hopes the learning component will have a ripple effect, leading more people to consider how public space is used throughout their cities. “And if women and people of color aren't honored in those cities,” she added, “then part of our educational campaign will be to point that out and challenge other cities to do what New York City is just now doing: breaking the bronze ceiling.”

There’s reason to believe that’s already happening. According to Jenkins, the movement has sparked many conversations with New Yorkers who’d never considered the role of representation in public art. She even spoke to one city employee who was now hoping to honor a deserving woman in Prospect Park, where there are nine statues and busts of historical men, but none of women.

“It’s a much wider goal than just putting up a statue,” Elam agreed. “Although after all this, that alone would be wonderful.”

#Elizabeth Cady Stanton
#female historical statues
#statues
#Susan B. Anthony
#women
#original
Do you know the scoop? Comment below or Send us a Tip