Grasses of a Thousand Colors, Wallace Shawn's unsettling new theatrical hallucination, is set in an unspecified city in an unspecified time that reflects our own bleak epoch like a gilded fun house mirror. Shawn portrays the well-to-do Ben, a physician-turned-genetic engineer who solved a global food crisis by inventing a nutrient that changed the digestive process of herbivores, enabling them to eat each other. Cattle populations boomed while also "reducing pressure on the planet’s dwindling supply of plants and pasture land." Ben got rich, everyone had plenty to eat, and then—you won't be surprised to learn mere minutes into the play—the whole thing backfired.

But "Grasses" isn't really "about" the potentially perilous consequences of genetically modified food any more than it is about bestiality. And there is plenty of bestiality. [SPOILERS AHEAD] While cheating on his wife Cerise one night, Ben leaves his new mistress Robin behind in bed and takes a walk in the park. There he comes upon a group of wild horses, mounts one, and rides it into the woods to a mysterious castle where dozens of elegant cats are holding an extravagant dinner party. (An sumptuous entree of mice is described with stomach-turning detail.) Ben and a feline named Blanche really hit it off; she gives him a handjob under the dinner table, and they retire to a private room upstairs for passionate lovemaking, followed by champagne, which he affectionately pours into a bowl for his paramour to lap up. 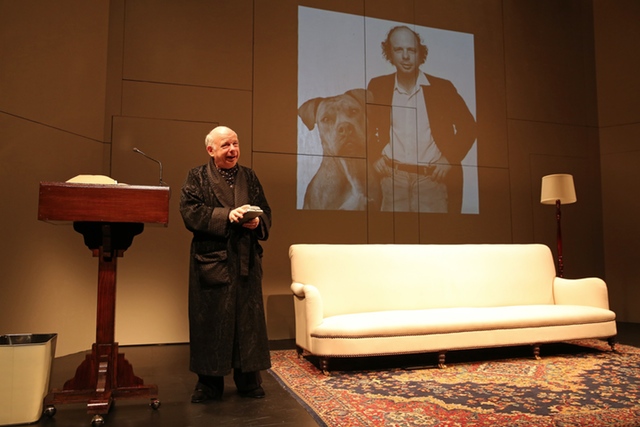 So Grasses of a Thousand Colors is a fairy tale of sorts. The preceding paragraph may give you the impression that it's a "twisted" fairy tale, but while it is very disorienting, it also makes sense on its own terms, and ours. The various bestial sex scenes are described in florid detail but not acted out—as is in Shawn's previous play The Designated Mourner, much of the story is told through direct address. Ben recounts the collapse of his relationship with Cerise (played with ephemeral grace by Julie Hagerty); his long, torrid love affair with the bawdy Robin (a hilariously blustery Jennifer Tilly), and, later, his sexual escapades with Rose (a pleasantly subtle Emily Cass McDonnell) and, yes, Blanche the cat (unseen). Somewhere in between, Ben gets sodomized by a clown with an "entirely un-artificial big red dick."

The interior logic of the play is that of a society that's shrugged off most sexual taboos that still carry weight here in 2013. In Ben's world, parents and children have sex, and adults pass out business cards with photographs of their genitals. Eventually, we're told, Robin moves in with Ben to worship, as she puts it, "at the shrine to the cult of the penis." Ben seems relatively grounded as he recounts all this in his black velvet robe, ascot, and aristocratic slippers, but it's clear that he and everyone else is fucking losing it.

Ben holds forth at length and quite amusingly about his deep fondness for his dick, which he describes as "not just a friendship... It was actually a love affair—an affair so intense that there was hardly room for anyone else." In another striking passage he recalls, "All of a sudden she stared into my eyes, penetrating me so deeply and fully that I felt turned inside out, and she just kept on looking at me. My God—finally. Finally, to be known, I thought, as hot sperm flowed out of me, flowing over her paw as if it would never stop." For man-on-cat action, that's pretty profound. 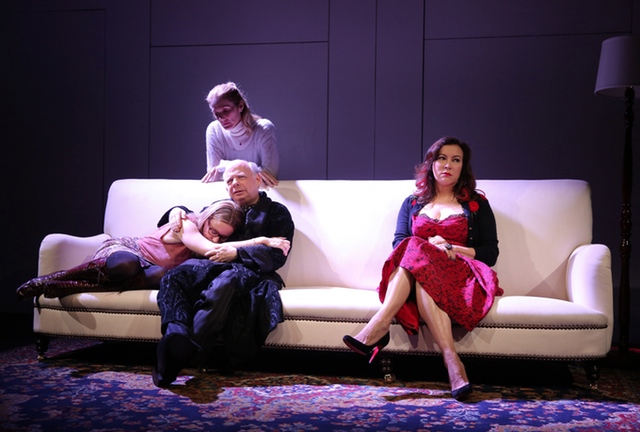 So what the hell is going on here? First, Shawn's work demands a willingness on behalf of the audience to be bewildered, to have their traditional notions of what constitutes theater upended. There is more direct interaction between Shawn and his terrific co-stars than in The Designated Mourner, but still, for the most part, the actors speak directly to the spectators, and conjure up vivid, often shocking scenarios simply on the strength of Shawn's incantatory script. The set is minimal: a pristine white couch, a lectern, a Persian rug that really ties the room together. Ben's enchantingly perverse world is created with as much or as little imagination as the audience is willing to provide as they meet his story halfway.

Digestion seems to be a key to, well, absorbing all this. In Grasses of a Thousand Colors, the human species is losing its ability to digest most foods, probably due to the nutrient that made Ben very rich. Perhaps because of that, they cling even more ardently to that other fundamental physical manifestation of nature. In an interview with Shawn in 2011, I asked him about the focus on sex in this play and others he'd written. His reply is worth excerpting here:

Well, I mean, I suppose it's possible that I am the only one on our planet who's interested in the topic and, uh, you know, I'm just revealing how abnormal I am. But I had sort of thought up until this point that this was a driving force in human life, as well as in animal life, and that it was also a central preoccupation of people's consciousness. And of course it's interesting because it is something that is filtered through all of the distinctively human mechanisms such as individuality, thought, the self—but it actually comes from the operational structure of mammals that preceded human life. So that's quite interesting.

People are not as preoccupied with digestion, they don't all express it differently, each person. I'm sure that a gastroenterologist would see different categories of digestion among people, but it's not obviously connected to what people would call the Soul or the Personality. But sex is intimately connected to each person's Soul, to their Personality, to the choices that they make.

And yet, it comes into the Soul directly from Nature. It's not made up by humans, the way poems are. It's not something that we humans have created, like plays, constitutions, biology, textbooks. Sex was invented before we were invented and it suddenly springs up and it comes right in our own houses and has a powerful effect.

I don't think it's that surprising that people would write about it.

I have no idea why feline fornication is something Shawn has chosen to write about, but those bestial encounters are described with more tenderness than the play's human-on-human intercourse, and of course it adds an unsettling element of fantasy to this very weird evening. (A video coda at the end may also provide another clue.) And digestion, a process that, like sex, our society also tends to ignore and suppress in polite company, is an equally essential theme.

And not just physical digestion. Humans' ability to mentally digest philosophical concepts, or to even remember what happened yesterday, has become highly degraded in Ben's world (this reminds me of something I need to Google later). At one point Robin declares, "'What is boredom?' one might very well ask. I thought about that a lot at that time. I came to see it eventually as a sort of spiritual inability to digest the events that make up our lives so that they can be turned into the substance that gives us pleasure." 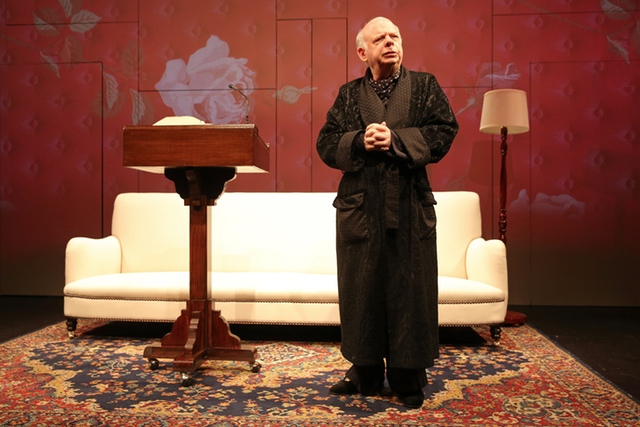 A baser sort of pleasure has always enthralled Shawn—as a playwright he has unflinchingly explored our society's sybaritic tendencies and our remarkable ability to ignore how these pleasures enslave us and countless others. We will not be deterred from pleasure, even as the damage our system inflicts explodes closer and closer to our faces. I wouldn't want to reduce a work of art to any one didactic single "point," but what I took away from Shawn's priapic wonderland is that as our species is forced to face evidence of its own demise, it wraps its white knuckles ever tighter around its essential nature. In a genetically engineered, artificial world, sex alone endures as a fundamental affirmation of our connection to nature.

Maybe that's just my perspective. You should see it for yourself; this is most likely the one and only time you'll be able to catch the inimitable Shawn in the role, perfectly rendered under the guidance of his longtime collaborator André Gregory, whose deceptively simple direction evokes an eeriness all its own. At three-and-half-hours, I did find the last twenty minutes a tad lugubrious at times, but at least Shawn offers the audience refreshments before act three. A table is set with deviled eggs, almonds, and chocolates. Sadly, it's BYO mice.

Grasses of a Thousand Colors continues at The Public Theater through November 24th. $20 rush tickets may be purchased one hour prior to each scheduled performance at the box office.

#opinionist
#theater
#wallace shawn
#original
Do you know the scoop? Comment below or Send us a Tip