The premise of Ethan Coen's first full-length play Women or Nothing is nothing extraordinary. Two women—a very successful concert pianist named Laura (Susan Pourfar) and a lawyer named Gretchen (Halley Feiffer)—desire a child, but differ on the means. Laura, an uptight rationalist who happens to be the only one in the relationship capable of reproducing, favors artificial insemination, but Gretchen doesn't trust it, arguing that there's no way to know for sure where that semen came from, other than a guy who "masturbates in a lab under fluorescent lights." ("Your problem is the lighting?" Laura retorts.)

Gretchen's solution is simple and time-tested: bring in a guy she knows from her law firm to do the deed. She's even met his daughter ("You can see what his sperm did!") and knows he's relocating to Florida, soon to be conveniently out of the picture. In fact, she's already taken the liberty of inviting him over to their apartment on a rainy night in New York City, which is news to Laura. And oh God what an apartment. Like the play's premise, the home's layout is nothing exceptional, but what designers Michele Spadaro and Bradely King do with some simple recessed lighting, tasteful art and tantalizingly comfortable furniture serves as a bitter reminder that, if you're like me, your place is kind of a dump. 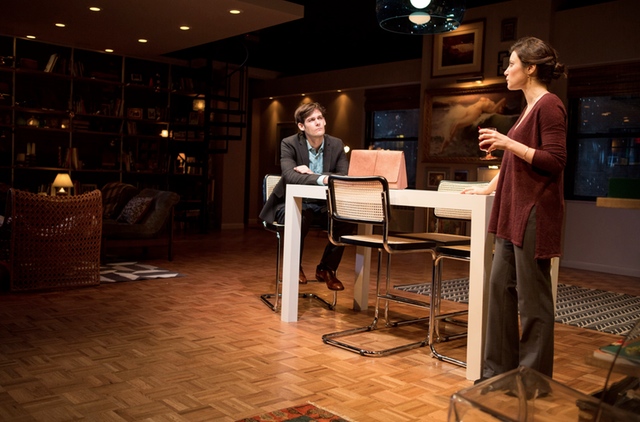 Into this Danish design-influenced apartment-porn refuge wanders Chuck (Robert Beitzel), a tall and self-assured lawyer who's ventured out on this stormy night on the pretense of delivering some files over to Laura, who is "running late," leaving her "neighbor" Laura to "let Chuck in," nudge nudge, wink wink. The plan, again, is simple and strains credulity at points, but it's Laura's awkward and unwilling execution that gives Women or Nothing much of its zing. She's a self-described "gold star lesbian," which, we learn, is the term for a woman who's never had sex with a man. As her brittle banter with Chuck becomes lubricated with hilariously shaken cocktails and glides into flirtation, you get the sense that Laura's secretly afraid she might like it. 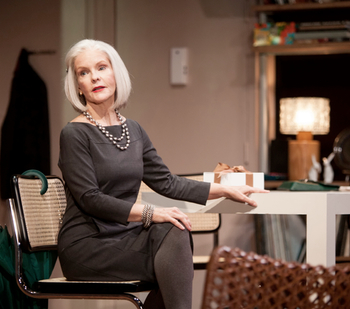 The action, if you can call it that, takes place in the same 24 hours, and the laughs sparked by Coen's witty dialogue are as unflagging as the fake rain outside the windows. To reveal much more would be to spoil the dainty plot, which hangs on a few simple strings pulled taut. But attention must be paid to the surprise second act appearance of Laura's tart and nosy mother Dorene, brought deliciously to life by Deborah Rush, who's uniquely suited to Coen's stylized dialogue.

Shrewd, eagle-eyed and uncensored, Dorene arrives uninvited and unwanted, but gets to work immediately, surgically dissecting her daughter's situation without consent, and deploying "too much information" about her own promiscuous past as an ineffective anesthetic. By the time she's done, Dorene knows more about Chuck than her daughter, and strides out with the biggest laughs of the night.

Women or Nothing has been extended through October 13th at the Atlantic Theater Company's Linda Gross Theater (336 West 20th Street). Tickets here.

#atlantic theater company
#ethan coen
#opinionist
#theater
#women or nothing
#original
Do you know the scoop? Comment below or Send us a Tip