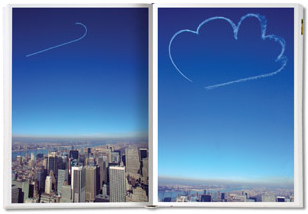 We recently got the new Creative Time book, aptly titled Creative Time: The Book. Unable to wrap our heads around what on earth The Urban Visual Recording Machine was after reading about it, surely we'd understand after getting our hands on the book where it plays the protagonist.

Well, sort of. The book is essentially a look back on the group's public art projects around the city. For example, the photo at left is from February 20th, 2001 - when a skywriter was challenged to draw cartoon-like clouds all over the sky above Manhattan.

The cover to the book is where this "Urban Visual Recording Machine" and its output is displayed. The experimental project captured the science of the city, the essence of Creative Time, and New York - where it's established itself in over the past 33 years. The undertaking was a public art project made possible through the aforementioned UVRM. The machine was housed in a truck with large plexiglass windows (think: Pope-mobile), and literally soaked up the city. It recorded colors, voices, weather, and everything else in little snapshots of time. For every 30 seconds, for 5 days from September 6th to 10th of 2006, the city was transcribed and outputted through graphic shapes and patterns. At the time, "5,000 book covers, each capturing a moment in NYC, were instantaneously printed on site." Our cover is from September 7th, 2006 at 3:06pm in Madison Square Park. The machine also captured Times Square, Chelsea, the East Village, Coney Island, The Art Parade in Soho, and Lower Manhattan.

Tonight Creative TIme is having a two-part event which includes an installation, book launch, readings and performances. More info here.