The Upper West Side Urban Outfitters Is Gone. So Is My Heart.

The Urban Outfitters on the corner of 72nd Street and Broadway is closed. It is gone. It is vanished. The faux-bohemian shawls and $30 t-shirts that once adorned its walls will soon be replaced by Bloomingdales' rejected designer jumpsuits, but for now, the 25,000-square-foot retail space is nothing but a sad, empty shell. My inner life now mirrors it.

It's a strange feeling to sincerely miss a corporate retail outlet. There are currently 12 other Urban Outfitters locations in this city, should I ever be gripped with the desire to purchase this $69 backless romper. But my melancholy isn't about Urban Outfitters the company, it's about my Urban Outfitters, the one that's been in my life since it took over the HMV music store in 2000.

There weren't too many places on the Upper West Side to purchase clothing for tweens at the turn of the century. Once I declared to my mother that I could not show up to middle school in clothing from The Gap, my relationship with her was reduced to a series of screaming fits at the now-departed Morris Brothers on West 84th Street, where she repeatedly refused to buy me a $50 t-shirt with the word "JUICY" scribbled across the chest, for some reason.

In 2002, I found the 72nd Street Urban Outfitters. Back then, the company wasn't the faux-hipster corporate behemoth it is now—or maybe it was, but who cares, kids love corporations! My first purchase: a Max's Kansas City T-shirt and a leather studded bracelet, SO HIP—but from that point on, that massive store became a home décor section away from home.

In high school, my friends and I would hang out there before going to the movies, terrorizing the 25-year-olds who thought they were cool enough to shop there. When I was old enough to lie to my parents about what I did at night, I used Urban Outfitters as a cover (IF YOU'RE READING, MOM & DAD I'VE NEVER BEEN TO A PARTY). I discovered the art of the layered T-shirt there in 10th grade. I tried on my first pair of skinny jeans in 11th. And as proud teenaged product of a capitalist society, I consoled myself with an Urban Outfitters purchase during times of strife—indeed, when Heath Ledger died in 2008, I dropped $200 there as an expression of grief. Urban was there for me, just as I was there for its bottom line. 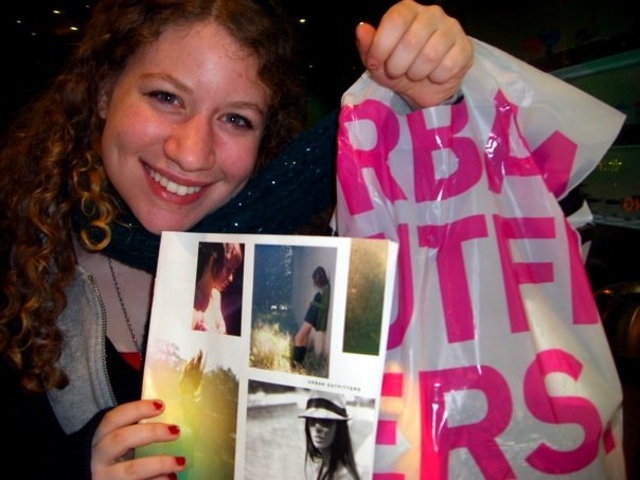 A portrait of the artist outside her place of worship, c. 2008 (Rebecca Fishbein Private Collection)

I left the Upper West Side four years ago, and now my beloved Urban has followed suit, unable to compete with its hipper Barstaurant Lifestyle Center brethren. Just as mourners gathered outside Tower Records a decade ago and the Lincoln Square Barnes & Noble in 2011, so too have the bereaved taken to my Instagram of Urban's empty storefront, snapped on an appropriately rainy, dreary night.

All that's left of my youth is that nearby Chase bank. And the memories.

Update 7/28: After reading the above piece, my mother offered a correction:

"I took you to Urban Outfitters for the first time to buy you the Max’s Kansas City T-shirt for a party in 8th grade. I am pretty sure it was my idea."

#chains
#RIP
#tales from a millennial
#urban outfitters
#original
Do you know the scoop? Comment below or Send us a Tip