Despite all the fanfare and viral advertising, the televised highlight of this weekend was not watching human ouija board Adam Levine rip off his furniture-like clothing as he performed at the halftime show of a historically boring Super Bowl—it was the premiere of Russian Doll, a wondrously thoughtful and NYC-centric comedy which was ceremoniously dumped onto Netflix on Friday.

The eight-episode first season, created by star Natasha Lyonne, writer/director Leslye Headland and comedy genius Amy Poehler, is absolutely wonderful: in addition to being a perfect star vehicle for Lyonne's unique comic voice, it mixes a Groundhog's Day-like story about time-loops and existential crises with an insider's perspective at life in lower Manhattan. It could be interpreted as a show about addiction, therapy, the scarcity of deli cats, or metaphysical connections. It's both ruthlessly unsentimental and unabashedly hopeful in tone. It's grounded in a textured reality, yet unafraid of leaps into magical realism. And it's a puzzle box that invites viewers to pull apart all of its details while at the same time having a core emotional journey that needs no further explanations.

If you haven't seen or read anything about it, I strongly recommend you go watch it before reading any further. While the basic premise is not a spoiler—a woman dies repeatedly on the night of her birthday, re-spawns, then has to figure out what's going on and how to break the loop...basically, a more acerbic Groundhog's Day—knowing anything more could take away from the show's many delightful surprises, including the ending. If you did watch it already, then plow right ahead...

A lot of people were confused by the ending of the series: after protagonists Nadia (Lyonne) and Alan (Charlie Barnett) were given one last opportunity to help earlier, damaged versions of each other move forward with their lives on the fateful night they intersected, multiple timelines suddenly converge into one another and culminate in a giant parade through Tompkins Square Park. When I binge-watched the entire series in just about three and a half hours this weekend (another joy of this show: every episode is under thirty minutes!), I took this as the emotional button on the entire affair, a Fellini-esque celebration (Fellini is specifically, and hilariously, referenced earlier in the series) that was more representative of a fantastical acceptance of our multiple selves than any sort of literal puzzle to decode.

"Life is like a box of timelines," Nadia told Alan a few episodes back, and our choices—the roads we did or did not take, the holes we were or were not able to climb out of—exist within us in the theoretical, if not the literal, sense. I especially liked that the show chose a joyful, cathartic image to end on over some sort of tease for season two (hi there Homecoming!) or some sort of attempt at over-explaining every fantastical element of the storytelling.

As you can imagine, not everyone had the same interpretation as me—especially not NY Times comedy critic Jason Zinoman, who unleashed his own wonderfully esoteric theory about the show with a 29-tweet thread this morning.

I see this show is an against the grain meditation on the cultural guilt about the Tompkins Square Park Riots. Sounds crazy? Pretentious? Nonsense? You’re right. But hear me out. Or don’t. 2/

If you click on the tweet above, you can read the full thread and all the ways Zinoman connects Tompkins Square Park history with the show. In essence, he hones in on a lot of little details about the costumes and setting of the show, as well as the purpose of the homeless character Horse, to get to a subtextual element of the story: "[Natasha Lyonne's] personal guilt is a stand-in for NY’s guilt losing the real authentic downtown represented by the 'cleaning up” of the park,' a fight the city won. If the riots were the last stand of NY bohemia, then it lost."

And the crazy Groundhog Day plot is a metaphor for old vs. new Tompkins. She shares this same day disease with Alan, organized, responsible, dying for marriage more than sex. Boring new Tompkins. 14/

..with NL suddenly, magically in a giant street parade demonstration. WTF? This is a nod to the demonstrations of the riots. Those giant puppets are nods to Bread and Puppet, LES stand-bys for cultural activism. So, still, WTF? 16/

The whole thing might just make for a fun fan theory...were it not for the fact that Lyonne and Headland both tweeted at Zinoman implying that these were all ideas they were consciously playing around with in the show.

Yo. Tell this guy to exit our skulls please. 🔥

I would now like to present you with this pony. pic.twitter.com/wzeZPxNF75

"To be totally honestly with you, I was telling my wife about this in the middle of the night, and she thought I was crazy," Zinoman told Gothamist. "So it actually is very gratifying in a weird way. Even if Leslye Headland and Natasha Lyonne didn't say, 'oh, you got it,' it still would be a valid thing, because it's out of the artist's hands at this point. But the fact you can just wake up and tweet out this cockamamie theory and have the makers of it say, 'yeah, that's what we were thinking too,' is hilarious and gratifying, and makes me think for one second that Twitter isn't a total waste of time."

Zinoman said his own personal connection to the park and its history over the last 30 years is one reason why he honed in on this aspect immediately: "It really is sort of personal, in the sense that my first interaction with New York was Tompkins Square Park," he said. "I think people's first memories of New York are often the most vivid. Mine was when I was 12 or 13, I visited my older sister who was 13 years older than me, and she was living in Tompkins Square Park on Avenue A, above Odessa, which is featured in the last episode."

"My first day in NY was the Tompkins Square Park riots, and I vividly remember I was on the fire escape watching a face-off between a line of police on horseback and a huge crowd of protesters, squatters, etc. it was the most dramatic thing, it was like out of a movie." 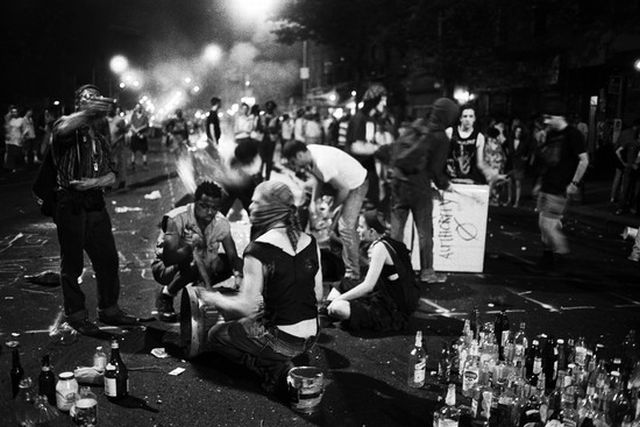 Zinoman would later move to the Tompkins Square Park area, and covered downtown theater at beginning of his career, spending a lot of time at places like PS122 and a lot of East Village theaters. "Every time they had a shot of Tompkins Square Park—and really, the whole show was taking place around the park—it immediately brought back memories for me," he said. "I think there's a few storylines and touches in the show that depart more radically from naturalism, and seem to be less central. And that is often the thing that draws my attention—for instance, the homeless character Horse. You can easily imagine the show without the character, so why is he there? And of course, the homeless population in Tompkins Square Park really meant something. It was central to the riots."

He noted that he also was confused by the set design and costumes, and wondered if it really was supposed to be set in the present day—the clothing and hairdos at the birthday party would fit seamlessly into the late '80s or early '90s, there's references to David Dinkins but not Donald Trump or Bill de Blasio. "They never mention the riots specifically in the show," he said. "The closest we get is the last scene, which is also the most magical realist. And I immediately recognized the Bread & Puppet theater aesthetic [in the final scene]—especially those giant puppets, which are very specific, and are associated with left wing activism in the Lower East Side."

The flashback scenes featuring Chloë Sevigny's character, who plays Nadia's mother, also struck a chord for him. "I wasn't sure if the dates worked, because the riots were in '88, and the personal trauma she has with her mom is in '91," he said. "But there was this long-running battle for the park, it went on for three years. And when Dinkins was mayor [in '91], he finally shut down the park and kicked out the homeless population. He really put the final touches on the park, he was responsible for changing it."

Of course Zinoman, who has only watched the show one time through when he was struck by this connection, doesn't think this is the only, or even necessarily the most important, takeaway from the show on the whole.

"I don't believe there is a right answer," he said. "Even though the people who made it said like, 'oh, get out of our skull' or whatever, the mark of really great art is that they made something that has enough mystery in it that it can be interrupted a lot of different ways, and it works on a subconscious level. I could easily give you other ways to interpret this show, I could argue with myself pretty easily why I'm wrong. I think the show works on a lot of different fronts, which is why it's so good."

And that wasn't even his favorite part of the show: "The thing I think is really cool is the style, the mood, the language," he said. "I'm not sure if I've seen a character like [Natasha Lyonne's character Nadia] on a show. That I think is the thing you could build a lot of seasons around."

"It does make you love New York," he added. "She's such a bad ass. She's such a really rich character. "