The Transit Museum Shows Us the Money 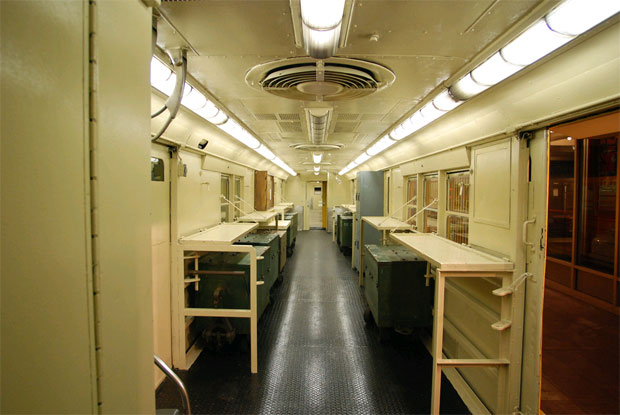 Yesterday we visited the New York Transit Museum’s new exhibit “Show Me the Money: From the Turnstile to the Bank" which details the fare cycle, from buying the fare instrument to the sorting of the money. If you haven’t been to the museum, it is located in a disused 1930s vintage IND subway station in Brooklyn Heights.

The new exhibit was perfectly placed in the museum, next to the display of vintage turnstiles and started off with some vintage token machines, which of course was the starting point for much of the cash intake for the system. The other ways of paying your way were also on display with a vintage token booth, which had the dies for some tokens on display, and a display about bus fare collection. MetroCards were represented with a display of cards with ads and provided the exhibits interactive feature - two MetroCard readers that answered fare related questions when you swiped.

The process of a fare on its way to be counted was was shown with a mockup of a money room counting table, some old counting equipment, a photo display of the process, and an explanatory video. The counting room was originally at the Transit Authority’s Jay Street headquarters, but is now located at a facility in Queens.

However, the real highlight was downstairs on the platform with an actual money train. The Transit Authority’s final fleet of money trains, designated R95s, were converted from R21 and R22 subway cars and painted to look like work trains. (We should mention that the real money trains looked nothing like the ones seen in the 1995 movie Money Train.) Until their withdrawal from service in 2006, the fleet of ten trains were staffed by 12 collecting agents, a supervisor – all armed and clad in body armor, and a train operator who six days a week took the money to be counted in Brooklyn. We have seen the trains in action during some late night subway trips and the collecting agents were definitely people not to mess with.

The exhibit, as well as the museum, is worth a look, since it gives a fascinating glimpse at something that rarely gets seen.