Standing in the bedroom of Paige Jennings, the daughter of the titular spies on FX's deservedly-adored 1980s Cold War thriller The Americans (which happened to be my favorite show of 2015), I feel like I've stepped into a real life A-ha music video. It's in the fuchsia walls, the assortment of colorful jewelry boxes which have taken on the appearance of ancient relics, or the Peter Gabriel and 38 Special cassettes. It's also in the shag carpeting, the soft-lensed Sears family photos along the walls, and the period-appropriate interior walls.

Sharing a set with the Jennings's household is the home of FBI agent Stan Beeman, complete with photos of his son Matthew playing guitar as an awkward teen and Stan getting a medal from the FBI. Having the two sets bleed into each other really takes cookie cutter-style suburban homes to the next level. Down the hallway, there is the Jennings' secretive laundry room, where many an emotionally-devastating plan has been hatched; there are also currently disassembled pieces of other sets, including Pastor Tim's church, Patti's home, and Martha's lonely apartment with Clark.

And that doesn't even get into the FBI set and all the other wardrobe, storage and working facilities here. Even with all the movies and TV shows filmed around the city, there are very few spaces in NYC that are large enough (and properly-constructed) to house so many sets for an extended period of time. But The Americans has lucked out with its own little corner of Brooklyn at Eastern Effects studio in Gowanus.

Unfortunately, no one else may get to use the space in the future: "The Americans might just get by—just in time for this building to get demolished," said Scott Levy, the founder and president of Eastern Effects, the TV studio which has been home to the show since the pilot. "But there's no other jobs coming." 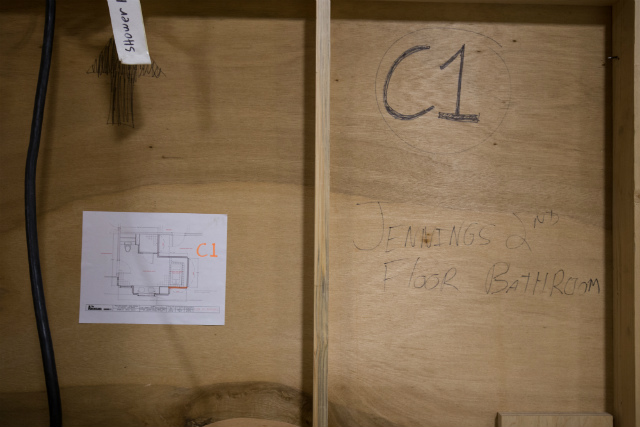 The Eastern Effects main studio—they have three buildings clustered in Gowanus, and another is currently being built in East New York—is located at 270 Nevins Street adjacent to the Gowanus Canal. It's right down the block from the booming Union Street, home to massive borough attractions like shuffleboard emporium Royal Palms and Brooklyn's first Dino BBQ location. After investing over $5 million in upgrades and years of exhaustive work to turn the space into a state-of-the-art facility custom-built for large scale shows, Eastern Effects is in danger of being closed to become a temporary staging site for Gowanus Canal sewage overflow tanks.

"We built this stage from the ground up," Levy explained. "This was an old, sixty-year-old building that looked like a sixty-year-old building, and we converted it." Among other things, it has completely sound-proofed walls, doors, bathrooms and even air-conditioning. "We made it right so that we would get every film and television production that would fit inside our walls."

The completion of the main studio on Nevins Street coincided with the start of The Americans—they shot the pilot there in the summer of 2012, and got their first taste of the complexities of being so close to the canal when they had to deal with overflowing toilets during that period. Then when Hurricane Sandy hit in the fall, they had to reckon with six inches of water inside their studio. They were given two weeks by Fox TV and FX to get things back up and running.

"The rest is history," Levy said, noting necessary upgrades have left him with nearly $2 million in loans. "The Americans did well, took off here as a TV series and it grew." They ended up building up their campus of three buildings to accommodate the show and keep all the interior sets in Gowanus. The program has been run out of there for four seasons so far (with two final seasons coming). The studio now has over 200 employees, including over 30 full-time staffers.

Those jobs are in danger of being lost due to what Levy describes as a massive bureaucratic mistake. Levy only found out about the Environmental Protection Agency order to use his business to help clean up the canal last month. No one is arguing that cleaning up the toxic Gowanus Canal shouldn't be a priority—we've all heard about the mix of "mud, poop, ground-up grass, detergent and gasoline" in the disgusting waters—but the problem, according to Levy, is that the city doesn't need to use Eastern Effects to do so. 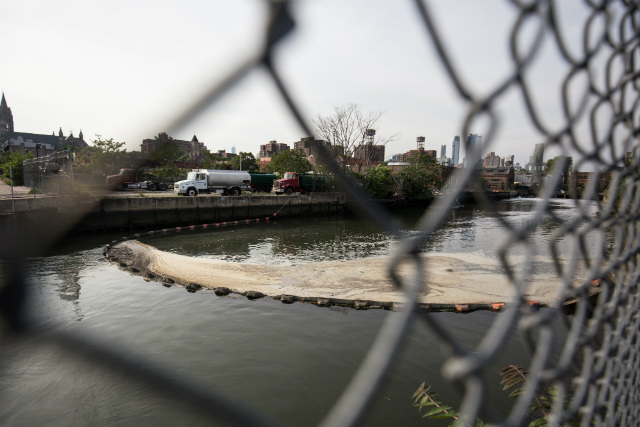 Levy argues that there are underutilized and vacant properties (including a larger building currently for sale directly across the street) surrounding the area that are viable alternatives for the temporary staging location. He says no one from the city or the EPA bothered to tour the facility in person before coming to the unilateral decision to take over the space.

"The new challenge comes along when DEP signed an agreement that says that all of this work, it's for nothing," Levy said, getting choked up. "They just want to take the building and temporarily use it to station construction equipment and clean trucks."

According to officials, the retention tanks will achieve an estimated reduction of 58 to 78 percent of the combined sewage discharges from the canal.

"And there are three buildings on this block that are completely vacant and available," he continued. "Why did they choose this building? There's no common sense logic that can say why. The DEP did not do their due diligence, and that's the bottom line: no one came. The other part that gets us really upset is that no one from the city told us that we were going to be displaced."

On top of all this, there is the matter of their lease: Eastern Effects is five years into a rare 20 year lease, and they have an eminent domain clause in it, meaning that if eminent domain occurs (as it would in this scenario), they will get nothing on the sale of the property. And if 270 Nevins closes, all the other studios will have to be shutter as well: "I couldn't recreate this," Levy said at one point during the tour of the studio. "No one's gonna give me a 20 year lease ever again."

Levy points to evidence that the EPA was aware of these other locations: in a letter to the city regarding the Gowanus Canal Superfund Site from December, they wrote, "Presently, EPA understands that there are commercially available, workable and considerably less expensive lease or sale options than the movie studio." It wasn't the EPA who initially even suggested the studio—it was the city: "At our last meeting, the City offered to provide a technical document supporting its position that Parcel 1, the Eastern Effects movie studio, is the appropriate staging area. EPA will review that upon receipt." 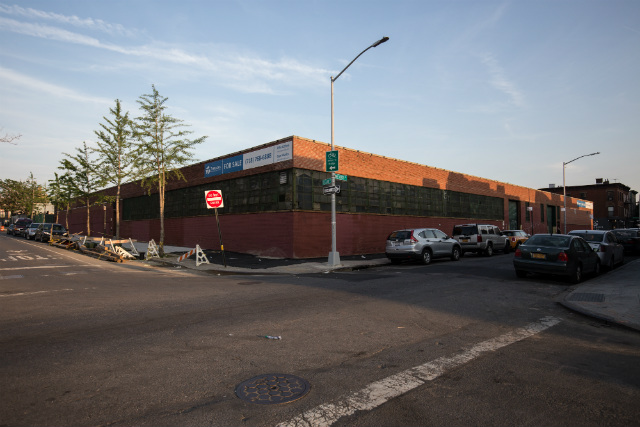 "The feeling and the sentiment is that we have something that creates jobs, there are 230 jobs that are sourced in this building," Levy said. "You can't say the same for any of these vacant properties or this empty land that's around this space."

City Hall spokesperson Raul Contreras gave this statement when asked about the project:

The administration will work with the community and all stakeholders throughout the construction of the tank required as part of EPA’s Superfund cleanup of the Gowanus Canal. This is an important project that will improve the health of the Canal and its residents by significantly reducing pollution. At the same time, we also recognize that the city's film industry is vital to NYC by providing tens of thousands of quality jobs and benefits to our local businesses. We will continue to work diligently and creatively to find the best path forward.

The studio has received support from other politicians, including City Councilman Stephen Levin, the New York City Central Labor Council, and various other local Brooklyn community groups. (It's worth noting that things weren't quite like that when the deal was first announced in April: Levin and fellow Councilman Brad Lander, as well as Brooklyn Borough President Eric L. Adams, all co-signed a statement saying they were "pleased" with the location.)

"We will not stand by idly while these people lose all of their work and our members lose their livelihood," said Alex Gleason, a policy associate at the Central Labor Council, which represents approximately 25% of the city's workforce.

"These are career-driven jobs, jobs that pay good family-sustaining wages," said Justin Collins, director of strategic partnerships and development at Southwest Brooklyn Industrial Development Corporation (SBIDC). "And these types of jobs, these industrial jobs, these industrial properties are disappearing from areas like Gowanus...They’re being replaced by rising rents and luxury housing is taking place of these job-intensive uses, and this is where New Yorkers work. So we need to take a stand to ensure that these jobs are still around and they sustain the neighborhoods. And it’s especially important when a company like Eastern Effects, which is a great employer and a great neighbor, and a great member of the community."

Inside the FBI Office set, Martha's old desk has been occupied by someone new; a few cigarette butts are left in an ashtray on Stan's desk; and Mail Robot sits in storage in the corner, presumably dreaming of electric sheep. Towards the end of the studio tour, we head into The Vault, the FBI's secured room where many a secretive meeting has taken place over the course of the show. There are photos of Oleg Burov and a poor man's Ray Liotta on the bulletin board, sharing space with sketches of Elizabeth and Phillip in disguise.

In there, Levy mentions that he thought Sandy would be the worst thing his small business would go through. Someone asks what else he would do if the worst comes to pass, whether he had any other business plans: "This is my dream," he replies. "You're standing in it."