Don't let the frigid air outside fool you: Summer Festival Announcement Season is here. Last week, the Coachella 2019 lineup was revealed, and this morning, the city's own Governors Ball has announced who will be playing the festival at Randall’s Island Park from May 31st to June 2nd. Check out the lineup below!

The Strokes, Tyler, the Creator, and Florence + the Machine will be the headliners for the ninth annual Governors Ball, which first launched as a smaller music fest on Governors Island in 2011 and has since moved islands and become one of the premiere music events around NYC. Kudos to Julian Casablancas who will perform twice during the weekend, on Friday with his solo band The Voidz and then on Sunday with The Strokes. It's a surprising group of headliners compared to previous year's big name guests—for some context, back in 2016 (the last time The Strokes played the fest), the other headliners were Beck, The Killers & Kanye West. In 2017, the headliners were Tool, Chance the Rapper, and Phoenix (plus Lorde and Childish Gambino). In 2018, it was Travis Scott, Jack White and Eminem (plus the Yeah Yeah Yeahs!).

But as with Coachella, it seems as though major festivals are increasingly having a harder time attracting the biggest stars—Kanye West apparently pulled out of this year's Coachella because he wasn't able to have his stage construction as he wanted, and Justin Timberlake pulled out because of his tour schedule.

However lowkey the top of the lineup might seem, it's made up for by the robust group of great up-and-coming artists down below, including rap legend Lil Wayne, indie darling Mitski, funky soul artists The Internet & Ravyn Lenae, the wonderful RnB singer Amber Mark, Australian rock band Rolling Blackouts Coastal Fever, Vince Staples, Saba, Sheck Wes, Soccer Mommy, US Girls—and those are just the artists who made our best albums fo 2018 list! 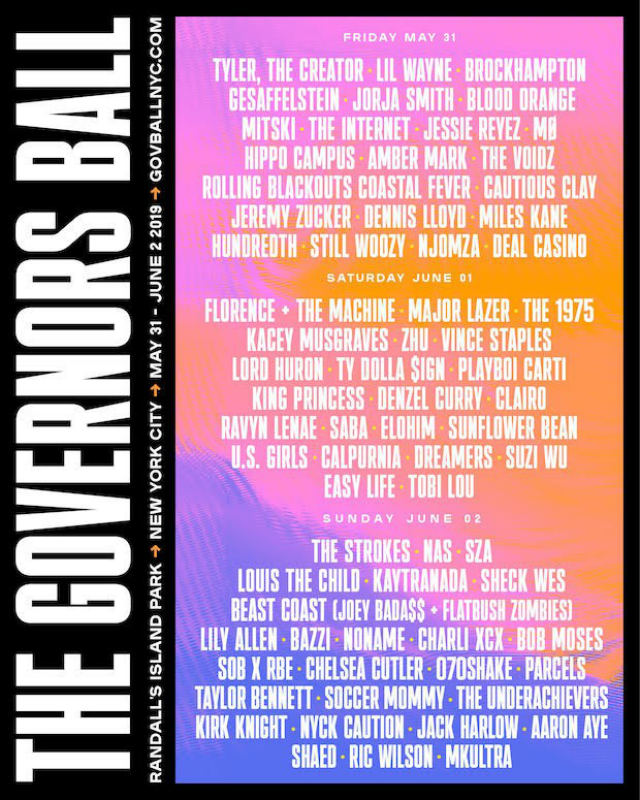 Tickets for the festival are on sale now—all ticketing information can be found here.

#governors ball
#Music
#randall's island
#summer festival
Do you know the scoop? Comment below or Send us a Tip