The building at 826 Broadway, at the corner of 12th Street, is remarkable, an early skyscraper exemplary of the Renaissance Revival style that distinguishes the architecture south of Union Square. The reason you know it, however, likely has more to do with what's inside: The Strand bookstore, arguably the city's most famous independent bookseller and a retailer so firmly entrenched in New York's culture, it attracts visitors from around the world.

The Strand is a landmark all on its own, and now, the city wants to make that status official. But according to The Strand's owners, workforce, and locals, codifying the site as a landmark could be unnecessarily burdensome for the bookstore.

On Tuesday morning, the Landmarks Preservation Commission held a public hearing on its proposed plan to landmark 826 Broadway along with six neighboring buildings, shielding them from the encroaching threat of a tech industry that's been snapping up and redeveloping space throughout the Village. On its face, 826 Broadway reads as a worthy candidate: Designed in 1902 by William H. Birkmire, a pioneer in steel skeleton construction, it stands 11 stories tall, impressive for the era. It played a role in New York's garment industry, but its cultural significance ballooned after The Strand took up residence there in 1957.

Ben Bass opened The Strand in 1927, with the intention of turning it into a literary hub. The business passed to his son, Fred Bass, who died in January of this year at age 89. "My dad started working at The Strand at age 13 and saved up his money for 68 years to buy the building that the store occupies," Nancy Bass Wyden, who inherited The Strand, said at Tuesday's hearing. He understood that rising rents would eventually force him out and shutter his store if he did not buy, she explained. The number of bookstores in New York has steadily declined for decades, Bass Wyden pointed out: New York had over 350 in the 1950s, but today, Manhattan counts just 79, only eight of which still stand in the Village.

Like most brick-and-mortar businesses, independent booksellers face often-fatal competition from online retailers—particularly Amazon, the tech giant slated to set up shop in Long Island City, after receiving a widely maligned $3 billion package of tax breaks. "Unlike Amazon, we have never asked for taxpayer funded subsidies, tax breaks, or special favors," Bass Wyden emphasized. "We do want the government to spare us new changes to our business that already operates on tight margins."

"We are at a point where we cannot absorb any unnecessary expenses. All of this designation will do will cost us in bureaucracy, time, money, and uncertainty," she said. The obligation to turn to the city for approval on every possible change to the storefront and interior, Bass Wyden argued, would slow down her team "just when we need to be our most competitive," and would deny them the flexibility required "to change with the needs of our customers." 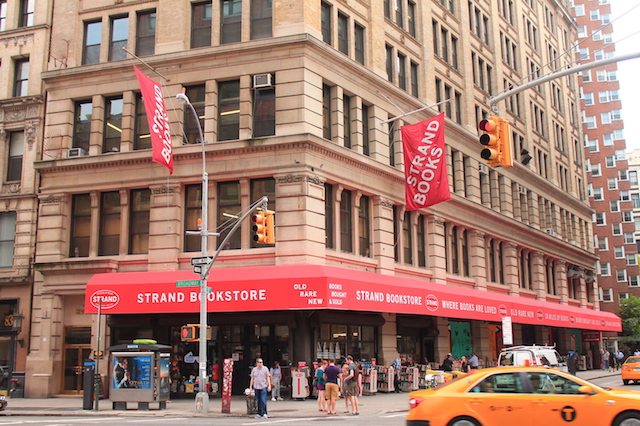 (Courtesy of The Strand)

Bass Wyden believes her family has proven themselves to be responsible stewards of the building, half of which is rented to business tenants, the Times reports. After sewer fires ignited a massive explosion that shattered The Strand's windows, for example, they made the independent decision to restore the building's facade. Routing similarly urgent matters through a municipal body strikes Bass Wyden as likely to add an expensive layer of delays to her everyday operations.

At the hearing, a number of Strand advocates voiced concern about the landmarking plan. The rare unionized bookseller, Strand offers its employees health insurance and a wage livable enough to pay New York City rent, one worker stated. Novelist Gary Shteyngart called The Strand "the best second home anybody could ever ask for," attributing his career as a writer to the store's existence.

"The Strand is where I came to worship literature, to learn from literature," Shteyngart stated. "When I was young and broke, I bought books at a tremendous discount," he added. "Those books made me a writer."

Although most attendees seemed to stand in The Strand's camp, some did make a case for landmark status. "There is no building so tall or so famous that New Yorkers will not demolish it," said Christabel Gough of the Society for Architecture of the City. "The reservations raised with respect to The Strand seem to us to be unfounded in reality, unless they plan to sell."

The LPC, meanwhile, maintains that it adeptly liaises with building owners who need permits for storefront work. In a statement, a spokesperson pledged that the Commission would "continue to work with the owner of 826 Broadway, home to the Strand bookstore, to address her concerns and ensure that this cultural institution endures. LPC successfully regulates thousands of commercial buildings across the city and we are sympathetic and responsive to their needs."

Theoretically at least, landmark status would protect 826 Broadway and a smattering of its neighbors from death by rampant development. Instagram and Facebook already reside south of Union Square, where a slick Tech Training Center is slated for construction. Again and again, though, residents insisted the commission had missed its mark.

Andrew Berman, executive director of the Greenwich Village Society for Historical Preservation, accused the LPC of "cherry-picking seven buildings, none of which are threatened or could be threatened due to their size." Meanwhile, smaller buildings with less notoriety but just as much historic integrity remained "vulnerable to the wrecking ball," one local complained. By contrast, taking a broader approach, perhaps designating the whole area a historic district might keep the tech industry from cannibalizing the architectural landscape.

Unfortunately, development has been changing the face of this neighborhood for quite some time, and buildings lack the continuity required of historic districts. Bass Wyden wasn't sure what such a designation would mean for her store, anyway, but says she believes the Strand's building has been singled out by the LPC arbitrarily.

"We're not going anywhere, we're overbuilt, we have no air rights," she said. "[The Commissioners] really need to put their precious resources toward other things, and we just need to be left alone."

#development
#landmark
#nancy bass wyden
#the strand
#union square
#original
Do you know the scoop? Comment below or Send us a Tip