The Story Of Fearless Girl, Created To Be 'Strong Yet Not Confrontational'

The Fearless Girl statue that was placed opposite the Charging Bull will now be a fixture in the Financial District until at least early 2018. And while it's received a lot of praise and become a hot spot for selfies, it has also received a considerable amount of criticism. State Street Global Advisors, a big business with a gender diversity problem (you'll notice their name on the plaque by Fearless Girl's feet) commissioned the statue, but it was artist Kristen Visbal who created it, and until now she hasn't really spoken in detail to the press about the work.

Visbal told us this week that only "the casting on Wall Street is owned by State Street Global Advisors," and that their "joint wish is that she remain on Wall Street." She added that she may create more Fearless Girls, and is "considering the issue of reproduction now... [Fearless Girl has] received a resounding embrace by women around the world," Visbal said, "[and I] will do my best, through the most elegant channels, to ensure Fearless Girl is available to these women."

Visbal declined to answer all of our questions, such as how she feels about some of the backlash and if she feels the corporate plaque could be removed, because she said she "cannot speak for McCann and State Street." She did, however, elaborate on how Fearless Girl came to be: 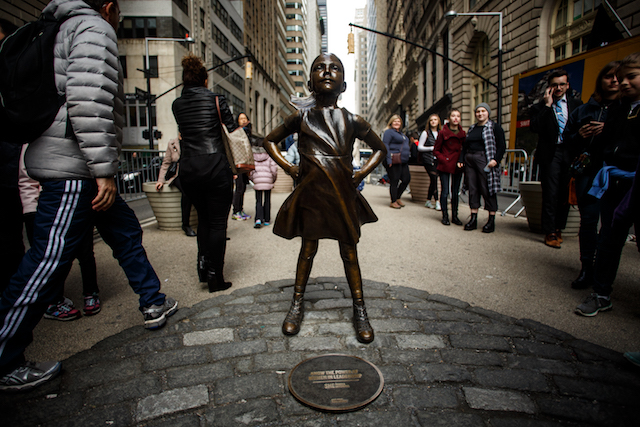 I was approached for the first time last fall to create Fearless Girl. The creative team at McCann New York and State Street Global Advisors wanted to spotlight the need for gender diversity at the leadership level. I'd say we did it! We collaborated to conceive of this powerful symbol with universal appeal that is strong, yet not confrontational. The goal was a child that was modern, hence the inclusion of high tops, a laceless pair I chose for a streamlined work. The entire work was modeled in just a few weeks in an effort to unveil the figure in time for International Women's Day, my second placement in celebration of this special event. We were all very, very excited, we swore each other to secrecy for the greatest impact.

In preparation for the photo shoot with my selected model, I chose clothing from her closet and asked her to imagine being strong in front of a great big bull. She did just that with great style! I attribute the physical attitude of Fearless Girl to this child. My model naturally tipped her chin up, further serving to support the strong stance of Fearless Girl, though great pains were taken to ensure a work that was strong but not belligerent or confrontational. I developed 11 sketches for the work demonstrating various sizes and 5 different hairstyles. In the end, we chose a figure 5% larger than life wearing a simple pony tail for a streamlined and sassy look. 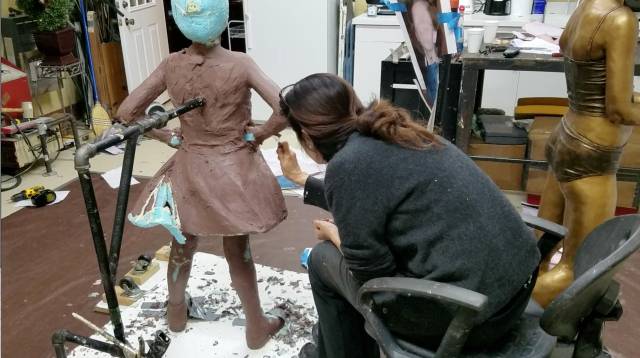 In late December I photographed a Latina child to give the work a more ethnic and universal appeal. The features of these two models were blended together and a good deal of ad lib was employed to achieve the face of our Fearless Girl. Clay modeling began in earnest on December 29th and the sculpture was complete on January 21st, the day of the Women's March on Washington. Fearless Girl was molded and then cast in Baltimore at New Arts Foundry.

I modeled the work but we all worked together to make it happen. This is particularly appropriate when you consider that Fearless Girl calls for collaboration between men and women in leadership. She is a call to work together. She has put a spotlight on the fact that, though women comprise 49.5 percent of the global population and 50% of the work force, their representation at the leadership level is pitiful. The discrepancy in pay scale is particularly disappointing when you consider that the year 2020 will herald the hundredth anniversary of women's right to vote, ample time for equal pay to have been instituted. Fearless Girl sets a necessary example for young women to understand that they are capable of anything they can dream of and to remember to stand tall and proud. The issue of gender diversity in leadership, proven to result in enlightened decisions, increased profits and an improved business environment, is entangled in issues of feminine inclusion and women's empowerment. I am a firm believer that a position need be earned. Leadership positions need be awarded to the best person for the job, not awarded simply because that person is a woman.

We all have something unique to bring to the table and Fearless Girl makes a call to the business owner to include the views of both men and women in the decision making process. State Street's involvement in Fearless Girl is an example of corporate America stepping forward on behalf of women in business. This is a good thing! Fearless Girl marks a moment in history when the need for gender equality in leadership has sailed, screeching, into the light. Now, what are we going to do about it? I propose we equip today's young girls with the education they need to lead tomorrow.

We also asked Visbal what real historical fearless woman she would create, given the city's shortage of statue of real women. "In addition to the Joan of Arc, Golda Meir, Gertrude Stein, Eleanor Roosevelt and Harriet Tubman works that already exist in the city, I see Amelia Earhart, Mary Wollstonecraft, Valentina Tereshkova, Marie Curie, Florence Nightingale, and Edith Cavell, who stated, 'I must have no hatred or bitterness towards anyone' as being women who embodied intellectual strength, freedom of spirit, and an understanding that all of us, men and women, from every corner of the earth and from every culture, need work together in mutual respect and equality."