The Story Behind This Perfectly Post-Apocalyptic 1980s NYC Footage

In the 1980s, photographer Steven Siegel was filming footage for what's been referred to as a "city symphony," a film genre Alex Barrett of the Guardian once described as "a poetic, experimental documentary that presents a portrait of daily life within a city while attempting to capture something of the city’s spirit." Siegel's 17-minute symphony was titled "Dream City," and we'll have more about the making of it later this week, but for now we're focusing on the opening shot.

Here's how the dreamlike sequence plays out: you're on a train that appears to be barreling towards the river, the tracks are jerking you around while the Twin Towers grow larger in your view, and the unsteady, post-apocalyptic terrain finally pushes you off a pier and into the Hudson.

Siegel collaborated with Phil Buehler on this opening shot, which only lasts only around 10 seconds, but is some of the most unnerving and haunting footage of 1980s NYC. So much so that it was picked up to use in the first minute of The Get Down's season two opener.

It's a shot that can never be recreated in 2017, and we asked Siegel and Buehler for the story behind it—here's what they told us:

Siegel: This was a simple in-camera technique—no fancy post-processing or special effects. I shot this sequence with my friend Phil Buehler, with whom I had collaborated on several films prior to "Dream City." We had given a lot of thought to a concept that we called a "time lapse tracking" shot. In essence, the technique was to shoot a single frame of film, move the camera few feet, make sure the camera lens was aligned with the prior shot, shoot another frame of film, and so on. In other words, this was a tracking shot that from start to finish took many hours to shoot—which makes it effectively a time-lapse shot.

Like other time-lapse shots, we see clouds move across the sky and we see the sun going down. What distinguishes this time lapse shot from others is that the camera itself is moving throughout. Phil and I had used this technique in a prior film. It can be very arduous to shoot. However, in this particular shot the mechanics of shooting were made much simpler because we were simulating the view of a locomotive moving down a railroad track. Thus, we were able to use the railroad track as a "guide rail" to facilitate the tracking shot. We constructed a small wooden dolly that moved on the railroad track. We shot a single frame, moved the dolly down the track a few feet and shot another frame. It may have taken us a half-day to shoot.

Incidentally, the setting here was an abandoned rail yard on the site of the future Liberty State Park in Jersey City. At the time that location could have served as a set for a post-apocalyptic science fiction movie. Of course, the power of the shot today is enhanced by the presence of the old World Trade Center. 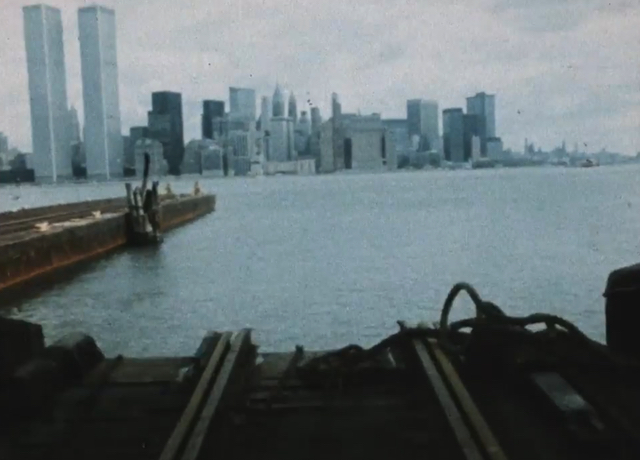 Buehler: We first tried the technique in 1974 when we were making a 16mm documentary about Ellis Island. We weren't aware of anyone having done anything like it before. It was like a poor man's Steadicam. The technique still fascinates me.

For the shot racing along the abandoned tracks we centered the cross in the viewfinder on a subject—in this case, we were lucky that the Twin Towers were off in the distance. We were both smitten with the World Trade Centers, these post-modern skyscrapers that redefined the New York skyline and became navigating beacons by which to explore the wastelands surround the city.

I built a wooden rig to slide along the rails, and then at each stop we'd level the tripod and center on the Towers. One funny thing is that as we moved along the track, there were switches where the track broadened out to a dozen or more tracks as we approached the water—so we didn't exactly know which switch to take to end up at the ferry terminal as we hadn't thought that far ahead. But we were lucky and picked the right way to go at each switch.

#1980s
#steven siegel
#phil buehler
#dream city
#original
Do you know the scoop? Comment below or Send us a Tip