There's something beautifully terrifying about this photo, taken several years ago, of a woman sitting on top of the Chrysler Building (like Margaret Bourke-White and Annie Leibovitz before her). Not the roof, but the shiny, slippery eagle's head that stretches out from the structure and over the city streets. She's wearing a little black dress and flats, and nothing is keeping her from falling except her own luck. It looks like it could be a photoshopped image for a fashion campaign, but it's very real. This is Lucinda Grange, and she's taken equally amazing photos all over the world, none of them very legal.

Grange is part of an upcoming show, called Night & Day, at the Joseph Gross Gallery (details below). That show features one of her two images on top of that eagle, the one where she's wearing a floor length dress, that's covering an injured leg. Below, Grange tells us about her inspiration Lee Miller, pushing the fear aside, and doing things "backwards and in high heels."

Where has been your favorite place to shoot? My favorite place to shoot has always been Newport Bridge in Middlesbrough, an industrial town on the south bank of the River Tees in the North East of England. It's a lift bridge that would, as the name suggests, lift in order for tall ships to pass underneath it. It's now welded down, unable to lift, but the towers remain. Honestly, I don't know why I love it so much, but I've climbed it countless times. Even spent 24 hours camped up at the top of the south tower once.

What is your dream shoot that you haven't been able to do yet? For a long time my dream shoot had been the top of the Great Pyramid, but I've been there now. I'd love to get onto the roof of the Ryugyong Hotel, the 'Hotel of Doom,' in North Korea. First I'd have to get into the country, and sneaking in would be half the fun. The risk level would be so high that the reward would be greater than anything I've ever done before.

But on a more realistic level, I'd love to shoot the Great Wall of China! I'd want to document every mile; from the parts that are a river of tourists flowing along the top of the wall, to the crumbling abandoned parts that are slowly being taken over by nature. I'm also extremely interested about how the wall affects the people around it. I'd also very much like to spend as many nights camping on the wall as possible!

How do you gain access to the locations you shoot? Every location has different challenges, for some it's finding the right person to ask permission, hoping to find them in a good mood...or changing their mind for a few bucks, beers, or smokes. For others its trying to find and gain access, and then avoiding cameras, sensors, and or guards. For the record, I did get a security guard to let me in for a piece of fruit, once!

How did you manage the Chrysler Building shoot? Can you go into some detail about this? I shot the Chrysler building many years ago, it's actually my favorite building. I went there twice, on the first visit I wore my little black dress. I went back again back again after I'd smashed my leg up only two days previously. I went on the day I was expected to get out of hospital (after busting out the day before). That's why I'm wearing the floor length dress, to cover my leg brace. A friend and I made a dentist appointment to get past security, my friend found out he had gum disease, then we took the stairs the rest of the way. Sometimes the coolest locations aren't the most difficult to get to, but stairs are a bitch when you can only bend one leg! 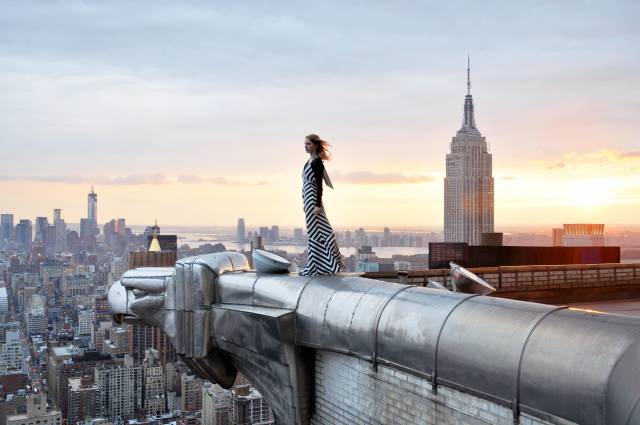 Were you scared to be sitting on top of the eagle? Of course I was scared. I stood on top of that eagle, which it should be noted, is curved on top, looking down hundreds of feet, and I could only feel one leg. There was also a strong breeze that could change direction and strength at any moment. I push aside the fear. Sometimes I need a reminder that I have a heartbeat, that I'm still alive! I find there to be something almost cathartic about being stood somewhere like on one of the eagles of the Chrysler Building.

Was anything keeping you safe, like a wire, in case you fell? I never used any safety equipment, no. I've been climbing since I was a little girl, so I know the limits of my capabilities, and how far I can push past them.

Have you ever gotten in trouble for one of your shoots? My brother and I got arrested in an abandoned hospital in Scotland once, years and years ago. The photo of us dressed looking smart to go to court was on my parents mantlepiece for years. They thought we dressed up for them until Christmas before last when a friend let the cat out of the bag.

So far I've not got into any other trouble. I do try to concentrate on shooting in locations where I have permission to shoot now, reducing the risk. I never aim to influence others to do as I do through my work, but rather to look at their environment in a different way. To see possibilitIes and hope, rather than closed doors. We're all guilty, myself included, of seeing the same streets everyday, but not really looking at or enjoying them. That said, I still bust out the ninja suit from time to time... 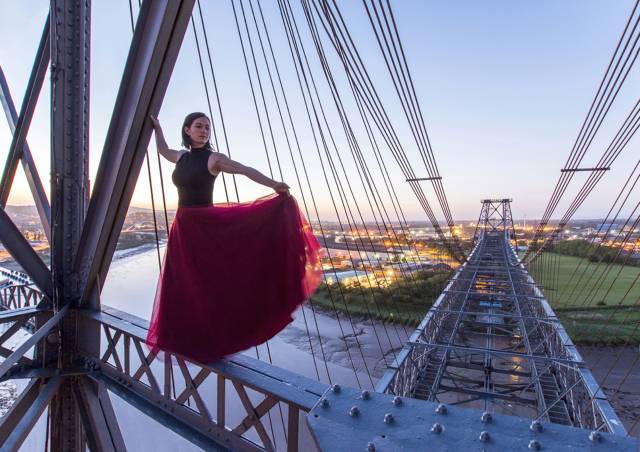 Your collection is called "Backwards and in High Heels," can you explain that? The three images I'm showing at Joseph Gross Galleries 'Night and Day' exhibition are part of my "Backwards and in High Heels" collection. I started this project to challenge gender stereotypes, to make the viewer reconsider the mental and physical capabilities of women. Risk and heights are two things that are often viewed as being things men work with, not women. These are two things present in all the images in this collection.

"Backwards and in High Heels" is a snippet from a Bob Thaves (cartoonist) quote about Fred Astaire and Ginger Rogers; "Sure he was great, but don't forget that Ginger Rogers did everything he did... backwards and in high heels." In calling my project this, I'm paying homage to the women I'm photographing, as well as the women that have gone before us, that broke stereotypes, fought their way into male dominated worlds, and made it possible for us women to be where we are.

Who inspires you? Lee Miller, a great beauty that graced the cover of Vogue and was a combat photographer during WWII, is a great inspiration to me. She photographed herself naked in Hitlers bathtub, in his apartment in Munich, and she climbed the great pyramid! Need I say more?

Grange's work will be part of Night & Day at the Joseph Gross Gallery (548 West 28th Street), which opens on July 14th and runs through August 6th.

#chrysler building
#interview
#lucinda grange
#urbex
#original
Do you know the scoop? Comment below or Send us a Tip