The Story Behind Hess Triangle, Once The Littlest Piece Of Land In NYC

The Hess Triangle outside of Village Cigars this week. (Photo by Sai Mokhtari/Gothamist)

There is a small plot of land located outside of Village Cigars at Seventh Avenue and Christopher Street that's got a big story behind it—it involves a headstrong landlord, the 7th Avenue subway extension, and the City of New York.

The story begins around 1910, when nearly 300 buildings in the area were slated to be torn down to widen streets and construct the new subway line. One of the casualties of this project was The Voorhis apartment building, owned by David Hess (no relation to the oil company). You can see where it stood in this map from the late 1800s. 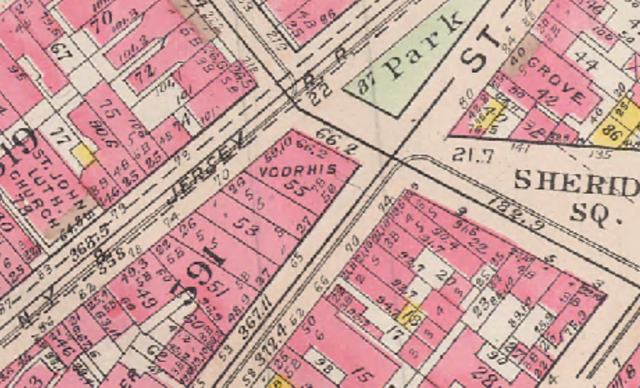 In 1913 the NY Times reported that "property owners and residents within the line of Seventh Avenue extension from Greenwich Avenue to Varick Street are preparing for the demolition of the buildings within the condemned area." All in all, 11 blocks were to "be ruthlessly cut through, destroying many curious old residences and businesses."

Hess put up a fight, but eventually lost his property to the city. By 1914, all that remained was the small triangle, measuring in around 27½" x 27½" x 25½". How did this happen? According to a 1928 article that ran in the Hartford Courant (noted here), "Hess's heirs discovered that, when the city seized the Voorhis, the survey had missed this small corner of the plot." The city asked the family to donate it, but they refused, and on July 27th, 1922 installed this mosaic, which reads in defiant all caps: “PROPERTY OF THE HESS ESTATE WHICH HAS NEVER BEEN DEDICATED FOR PUBLIC PURPOSES." 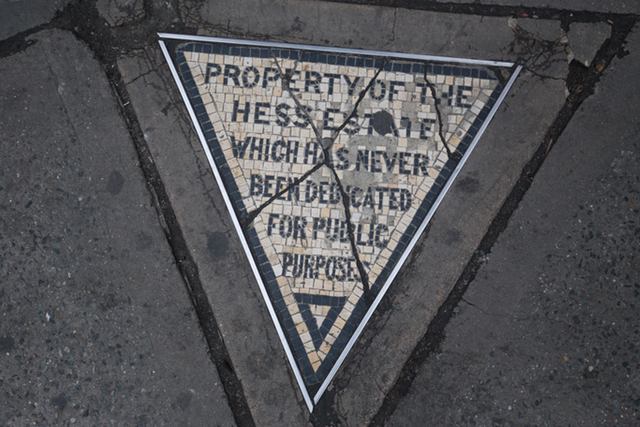 The day after the mosaic was put in place, the NY Times reported: "One of New York's small real estate parcels was brought prominently to notice yesterday, when workmen laid yellow and black tiles in the space used as a sidewalk at the southwest corner of Christopher Street and Seventh Avenue... The tiles aroused considerable interest. The parcel is a triangular in shape... It is one of the smallest pieces left in private ownership as a result of the cutting through a few years ago of the Seventh Avenue extension. It has been assessed on the tax books for $100." 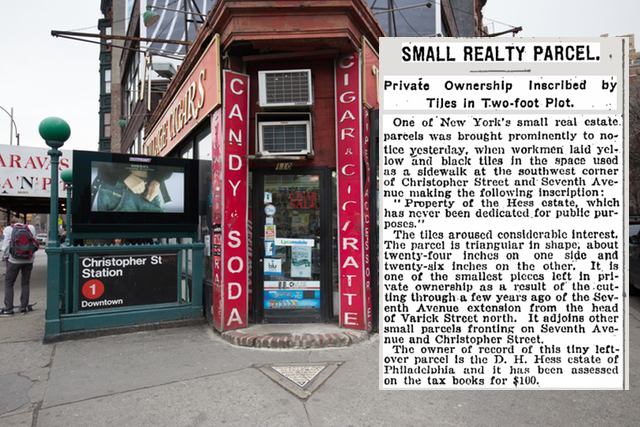 Here's a map from 1916, showing how the area changed with the 7th Avenue extension, forming something closer to the property lines we see today. 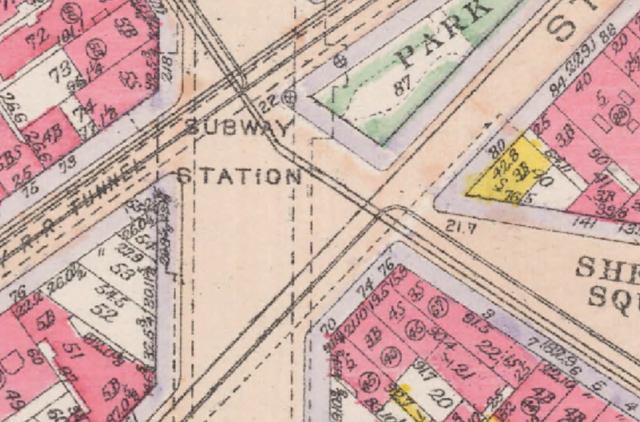 As Chris Whong has pointed out, lot 55 can still be seen in the above map, separating it from lot 54, which is Village Cigars. This is because it wasn't until 1938 that the Hess Family sold their triangle to Village Cigars for the price of $1,000. Whong believes the lot was actually larger, measuring in closer to 7.3 square feet.

The Hess Triangle is now part of Village Cigars' lot, but it was at one time the smallest piece of land in Manhattan, and it remains a big F-U to anyone with a wrecking ball. 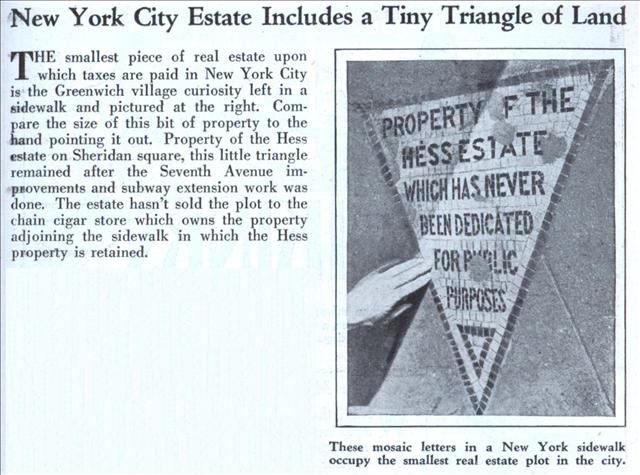 Meanwhile, over on Maiden Lane, there's a clock in the sidewalk.