The Sirens Sing Us to Coney Island for Another Year

We've survived the sirens for many years, and if this truly was the last Siren Fest ever, it certainly went out with a bang. Coney Island was packed full of thrifty music fans for the 7th annual Siren Festival this weekend. Despite the current trend of awful weather for every worthwhile free outdoor concert this summer so far, nobody could complain about the perfect day at the beach this past Saturday. 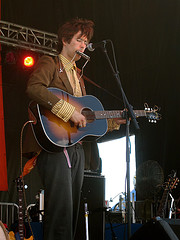 We got down there early to try and make the most of it and catch as much music as our freeloading ears could absorb. Upon arrival, The Twilight Sad were attempting to set up their complicated stage rig and unfortunately got a late start. We listened a bit before heading over to Nathans for a few dogs, then the Stillwell stage for an inspired set by Elvis Perkins, who had his full band of horns, strings and giant marching band drums behind him stomping away in full force. It was quite the spectacle, counterbalancing the low-key acoustic front man and combining for a surprisingly forceful set.

From there it was back over to the main stage where we caught one of our most anticipated bands at the fest, The Black Lips. They defied expectations and atmosphere as they turned a perfectly sunny day into a filthy basement bar, playing a remarkably tight set for a sloppy, bluesy southern rock band. The chicken gimmick, which may have upset some unaware folk, was just that...a cheap trashy gimmick for a cheap, trashy band. A down pillow and air cannon rained feathers down over the crowd while the unharmed chicken (named Popcorn) innocently walked around the stage throughout the last song. We don't quite get if they actually tour with this chicken, or if it was a one-time stunt worthy of a Coney Island sideshow, but it didn’t upstage their excellent set.

It was a tough act to follow, but shortly after, We Are Scientists took the stage and did their best with a set full of jams that made us wonder why these guys never became the next All American Rejects. Their songs hit a perfect chord between emo/pop catchiness and straight indie rock authenticity, and it was a joy to see them back on stage after they’ve been laying low for a the good chunk of the past year. From there, the top draw for many, M.I.A, took over the main stage and wowed the crowd with a mix of old Galang-era beats and impressive new stuff. It was fun for a while, but peaked at Bucky Done Gone a few songs in. Not wanting to miss all of Voxtrot, we squeezed out midway through her set to get over to the Stillwell stage. 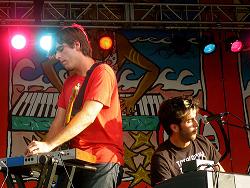 Unfortunately, after leaving, we discovered that security had to close off access to the Press/Photo pit due to major overcrowding and we were unable to return over for headliners, The New York Dolls. Thankfully, finishing off the day with Voxtrot and Cursive was an excellent alternative. The Austin quintet was as inspired as ever, playing a charged set that contained every ounce of energy they could muster. They were followed by Cursive, who capped off the day with a sunset jam that had even the stodgiest snobs bouncing around and shouting along at the top of their lungs. Front man Tim Kasher reminded everyone one last time about the future plans of Coney Island, with condos and hotels to line the currently dilapidated boardwalk. He stated his displeasure with the constant need to demolish unique landmarks and hoped that the always diverse New York City wouldn't turn into a bigger version of his hometown of Omaha, which had bulldozed many of the cultural landmarks he grew up with. Cursive left the stage right as the sun set on another perfect outing, and we took one more look around at the iconic surroundings, wondering if there will ever be another day like it. However, we do hear that the Voice has already set a date for next year's Siren.

For some more pictures, check here and here, as well as all over flickr.