The Short, Sad History Of The Yankees 1980s Mascot, Dandy

"Dandy was a failure," the NY Times reported in 1998, over a decade after the furry Yankees mascot was hung out to dry. But before Dandy died, he was born into his gloriously short life...

Dandy was created by Bonnie Erickson (who also created Miss Piggy) of Harrison/Erickson, a design company she runs with her husband Wayde—the duo created the Phillie Phanatic in the late 1970s, and the Yankees were hoping for a similar hit. The couple run their company out of their Brooklyn Heights home.

The Grey Lady pinpoints the pinstriped mascot's lifespan to have been from 1982 to 1985. Wikipedia notes Dandy lived from 1979 to 1981. The WSJ also noted in an article in 2010 that Dandy lived from 1979 to 1981... but in the accompanying video, they state his tenure was from 1982 to 1985. Dandy's history is a hazy one, and the college kid who was in the costume, Rick Ford, has claimed "the Yankees didn’t even want people to know there was a mascot."

Indeed, former Yankees exec Joseph Perello told the Times that the team never had a mascot, and in the late 1990s George Steinbrenner claimed to have no recollection of him. According to Wiki, however, Steinbrenner was quite aware of Dandy, and even argued with Erickson over the shade of blue that would be included in his costume.

Still, it stood that even those physically closest to Dandy failed to really see him... probably because he was banished to the nosebleeds. This 1981 guide to the ballpark, however, claims he was simply up there handing out goodies, leading the cheers, and making people happy. But was Dandy happy? 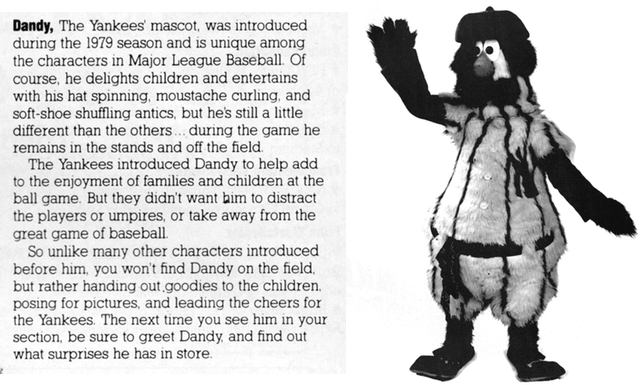 Harrison believed Dandy failed "because he wasn't allowed out of the nosebleed area in the stands. Nor did he do any outside appearances." According to the Times, Steinbrenner "was less than enthusiastic about the mascot after Lou Pinella, the Yankee outfielder, got so angry at the San Diego Chicken's clowning that he threw his glove at the bird." Pinella later said, "If people want to pay to see a chicken, they should dress up the ballplayers in chicken suits." This incident occurred in 1979, which was unfortunate timing for Dandy, who was just debuting that year.

There is scant information about Dandy, but here are some some fun and some utterly depressing facts (the latter mostly pulled from that fantastic WSJ article from 2010):

According to Josh Eisenberg, Harrison/Erickson (under the name Acme Mascots) "still have the designs and the rights to Dandy." We've reached out to them, as well as Ford, for more information on Dandy's past... and future?

#bonnie erickson
#dandy
#erickson harrison
#history
#mascot
#wayde harrison
#Yankees
#original
Do you know the scoop? Comment below or Send us a Tip