Bryant Park will be the venue for the fest. (Photo by MissApril)

The Roots have toyed with the idea of throwing a music festival in New York City for years, and now it's finally happening. Questlove, Black Thought, and the rest of the band have announced Roots Picnic NYC, a two-day festival in Bryant Park that will feature D'Angelo, John Mayer, The Wu-Tang Clan, Nile Rodgers, and David Byrne. It's happening October 1st and 2nd, and will also feature dozens of hip-hop and R&B acts including NYC DJ legends Stretch Armstrong and Bobbito, rapper Kevin Gates, R&B singer Jeremih, New Orleans bandleader Trombone Shorty, Swizz Beatz, and more.

Announced Monday morning by Okayplayer, the festival takes after the annual Roots Picnic in Philadelphia, which has taken place for last nine years and routinely features The Roots backing high-profile rap and R&B artists. Past headliners have included Snoop Dogg, De La Soul, Erykah Badu, and Usher, who performed at this year's festival less than 48 hours ago. Questlove has suggested that D'Angelo and John Mayer are due to perform on stage together, which will surely make both blues-pop and neo-soul fans' heads explode.

"New York is a second home to us," Questlove told Billboard. "There's going to be pop up shops there, really good curated food, comedy, DJ parties there and acts that you wouldn't expect... We're deeply involved in everything, from the grass area to the food you're gonna eat to the music you're gonna hear in between. We're a part of all of that."

Tickets (pricing T.B.A.) for the festival go on sale Friday, June 10th at 10 a.m. via Ticketmaster. 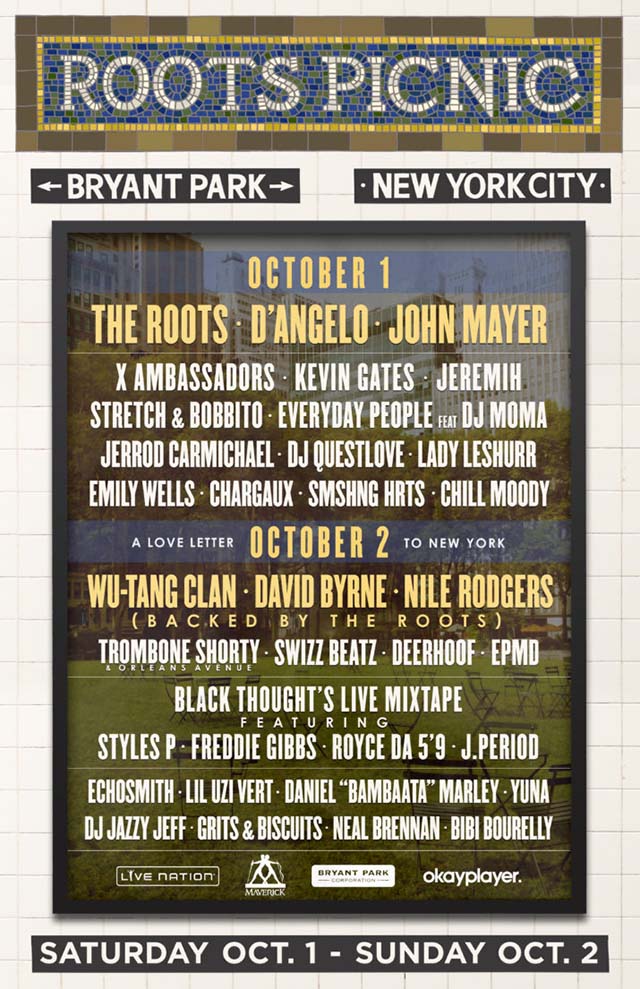 #D'Angelo
#david byrne
#John Mayer
#Nile Rodgers
#Roots Picnic NYC
#The Roots
#wu-tang clan
Do you know the scoop? Comment below or Send us a Tip