The Return of the Print 'Zine? 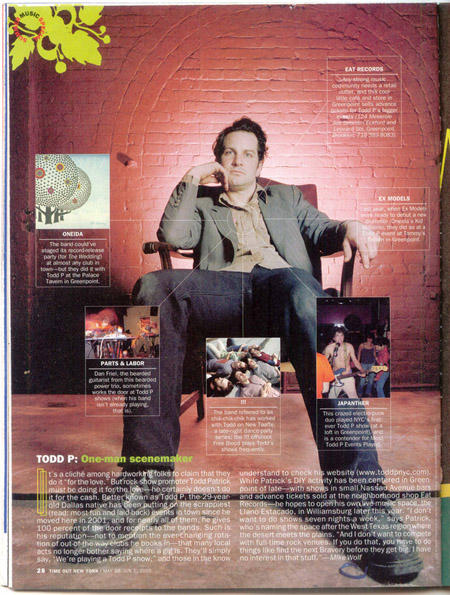 Todd P is known around town as one of the hardest working men in D.I.Y. show biz. He created a scene out of avant garde bands, old buildings and some plywood -- and has given plenty of music lovers a place to hear good music for cheap, while sipping on a $2 beers and sweating in barely ventilated (or legal) venues. But what's this...Todd P is going on hiatus? To work on a print 'zine? That's so DIY, or indie, or punk rock...or something. (Update: Todd P tells us, "Showpaper is not one of the projects that I'm taking time off to work on. While the idea for the paper was mine originally, I don't actually work on the paper in any day to day sense.")

His website leaves us with the message: "hello New York! so I'm takin it a little easy for the next few months - you won't see a lot of shows from me while I take a substantial break & work on some other projects for awhile." A collective sigh was likely let out somewhere over Williamsburg when that went live. The Village Voice finds the indientrepreneur working on his 'zine:

Call it a Luddite revolution—in an age where everyone has a URL, Brooklyn's DIY music community has rediscovered the joys of newsprint. Showpaper, the free, full-color guide to all-ages shows in New York City and surrounding environs, was originally the brainchild of promoter Todd P., the most benevolently tireless mastermind a scene could hope for. The biweekly tabloid mixes straight concert listings with a self-satirical, Missed Connections–style dating sidebar. (Sample: "Shoeless girl w/ poison ivy making out w/ shirtless guy n the Vice tent @ Boredrums—I'm much better equipped 2 scratch yr itch.") Recently, they've also added a horoscope section that offers advice and matches astrology signs with their ideal concert matches.

What's old is new again. But will people pick it up when they can just go online and see listings lickity-split? Having raised enough money for many issues through fundraiser shows, the presses should be rolling for a while, but why go completely offline? Todd P says, "Remember when the Internet first came around, how everybody thought it was going to make underground shit easier to happen and get heard about, and that everything was going to be decentralized and better? Well, it didn't work out that way—if anything, independent rock is more dictated and commercial than it was before the Internet. So we made a conscious decision to keep Showpaper off the Internet." Well, except for that MySpace page. We're happy to see the 'zine make a comeback and will certainly be picking up some issues in the future...will you go offline to read about the rock?