The Physics of Meaning, Band 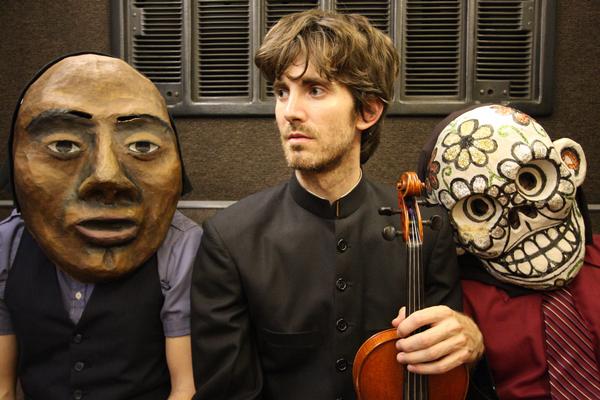 The Physics of Meaning played our Gothamist House show on Wednesday, and have been one of our favorite bands this CMJ by far. They're a self-described "chamber rock band" from North Carolina headed up by Daniel Hart, a multi-instrumentalist who you may recognize from another lil band called St. Vincent. This week another band, Wild Sweet Orange, interviewed them for us--today you can check out the latter at our show (they play at 4:30 p.m.), and tomorrow put yourself in front of the Physics of Meaning at their final CMJ show at Rehab.

Photo of Physics of Meaning by Lara Khalil.

Do y'all have any tricks (besides drugs or alcohol) on how to keep the emotions alive with playing the same set every night? Lately I've been dancing a lot during our shows, working on my night moves. Even when I'm singing at the mic, I try to think about James Brown and the way he would present himself in the concert footage I've seen. I'm a white guy from Kansas, so it translates differently (a lot of spinning around in place while playing the violin and awkward knee-gyrating while singing), but James Brown is on my mind.

Do you like or dislike hotel towels? And why? I've never felt a particular attachment to any towel I've owned or used. We stayed with our friend Jordan after our Athens, Georgia show at the beginning of this tour. He had a towel with a giant picture of Spuds MacKenzie on it. Two of my bandmates used that towel to shower, one right after the other, just to get closer to Spuds.

What is your favorite restaurant in New York? This question feels more difficult right now than most exams I took in college. You want me to narrow it down to one restaurant. Maybe if I had a week to think about it. I'll go with Lombardi's for now. That's some crazy good pizza.

Do you have any tricks on staying fit on the road? I try to take deep breaths as much as possible, for mental fitness. Usually I forget, and then I drive my bandmates stupid with my inability to "lighten up". When I actually feel like taking care of myself, I do a lot of stretching--hamstrings--and a lot of crunches. I watch a lot of fitness infomercials, too: Hip-hop aerobics, the Abswing...Hip-hop aerobics.

1. The inconsideration of other drivers on the road for the vehicles around them

3. If I need to pass around your vehicle with my vehicle, please have the courtesy--

#cmj
#CMJ08
#gothamist house
#interview
#the Physics of Meaning
#Wild Sweet Orange
Do you know the scoop? Send us a Tip