The People Of 1919 Imagined Circular Runways For NYC (You Know, For Our Personal Commuter Airplanes)

When the Wright Brothers did their thing in 1903, it apparently put the idea in people's heads that one day we'd all be flying, everywhere, for everything... even to our jobs. We've had this fantasy pop up time and time again—including the most popular pop culture reference of all, in The Jetsons—but it has yet to really happen on a broad scale, and for a long period of time. Sure, we had New York Airways, which helped some commuters skip traffic into the city, but that ended in the 1970s after too many people died and the company shut down operations. But let's go back further in time, to 1919, when this airplane business was new, and the ideas were even more wild.

Back then, it seemed pretty certain that flying to work would be Our Future, the only question was, how would the city accommodate these personal airplanes? Specifically, where would they land? In a June 1919 issue of Popular Science, writer Carl Dienstbach laid out all possible pitfalls of bringing aircrafts to cities, noting, "clearly, city streets, flanked by high cliffs of architecture, lend themselves about as well for airplane landing and starting as they do for ice-boating.” One solution to this problem: "a platform in the form of a circular, high-banked track—a track that would be constructed of light but strong iron gratings, so that sun and air would still find their way to the streets below.” 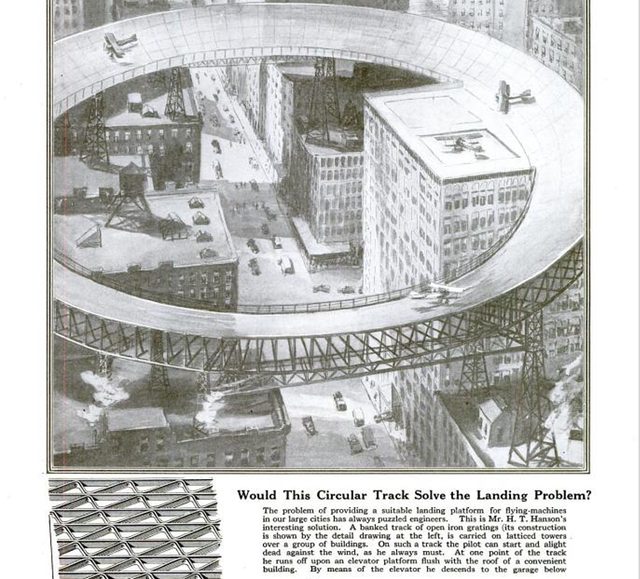 #airplane
#circular track
#commute
#flashback
#history
#popular science
#runway
Do you know the scoop? Comment below or Send us a Tip