The Oscars Are Coming! 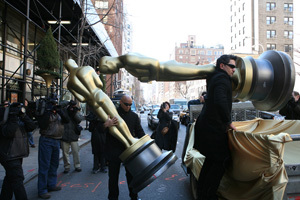 The Oscars are in town! Well, at least some 8-foot Oscar statues for the official New York Oscar night celebration at the Carlyle hotel, where east coast industry folk will come together Sunday night as the show goes down in Hollywood.

Nominees were announced on January 22nd with Best Picture nods going to Michael Clayton, Atonement, There Will Be Blood, No Country For Old Men and Juno. The love and buzz continues to surround the latter, but will the indie take home the golden prize?

Village Voice film critic J. Hoberman told Gothamist he agrees with the predictions about Juno winning Best Picture because No Country For Old Men and There Will Be Blood voters will cancel each other out. He added that the Academy voters always love a good Hollywood "underdog" story, something Juno represents as the little indie that could.

As for Michael Clayton, George Clooney has declared himself the Hillary of the Oscars, telling Time "there is no way Daniel Day Lewis won't win. For me, it's like being Hillary Clinton. If it weren’t for Barack Obama, it would have been a very good year. If [Michael Clayton], has a shot at anything, it's best supporting actress with Tilda Swinton." All of Clooney's picks are here; the NY Times' David Carr (aka The Carpetbagger) has his thoughts about who will win here.

If you haven't seen any of these movies, free up your day tomorrow and buy a $30 ticket to see them all consecutively at AMC Theaters. With your all-day pass you will also get unlimited popcorn, so while you might leave a few pounds heavier, you'll be worth your weight in gold with well-honed opinions for the big day! Not sure where to tune in to Tinsel Town? Host your own shindig; The Food Network has recipes for the perfect Oscar party (The Carlyle chef also leaks his menu for the evening). For a night on the town, The Reeler and Spout are teaming up for an Oscar extravaganza; bring your favorite movie nerd and head to DIP on 3rd Avenue for some fondue and film. At the very least, get an Oscar office pool going, our money's on...

Photo via the NY Sun.