The Original CBGB Awning & The Conspiracy To Cover Up Its Location

There's really no reason that a band like Jodie Foster's Army (JFA) should be mentioned in the same sentence as the Rock n' Roll Hall of Fame. If they haven't paid attention to ELO, why would a little punk band from the '80s turn up on their radar? And yet for a brief moment in time, the Phoenix-based band was a thorn in the side of the Hall's Curatorial Director Howard Kramer.

Recently I took it upon myself to find out where all of the CBGB awnings are—one (the final one) already had a known location: the Rock n' Roll Hall of Fame. Another, my quest revealed, was with a former employee (who brought the awning briefly back to its old home for us last month). But what about the holy grail of CBGB awnings: the original?

It has long been rumored that the first awning was stolen by JFA after a gig at the venue in the 1980s. Throughout my investigation, several people involved with CBGB over time have confirmed this with me. 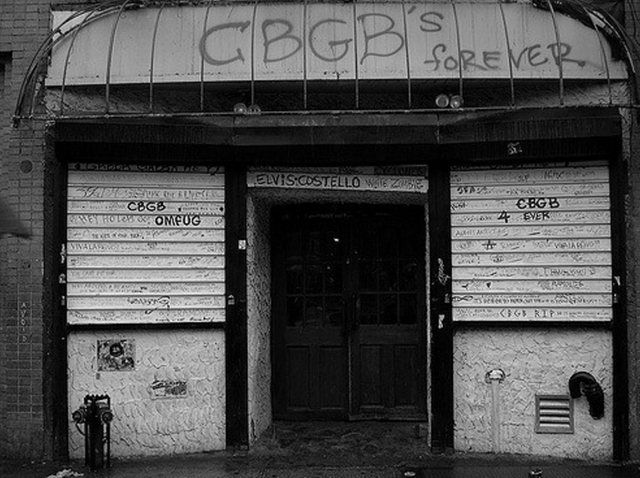 There's no trace of the aforementioned awning photo on the band's Facebook page (which hosts plenty of other photos throughout their existence), so if this is all true they're purposefully keeping it under wraps. I have reached out to JFA several times since January, and have not received one response.

However, others keep coming forward with their own JFA stories regarding the awning, and the most interesting by far has been Kramer's.

Kramer worked at the Rock n' Roll Hall of Fame from 1996 to 2014, and spearheaded getting a CBGB awning in there. While he succeeded in bringing an awning to their lobby, he didn't get the one he wanted: the original. Here's his story:

Around 1999 or 2000, we were having a discussion about what great and emblematic artifacts would be good additions to existing case we had covering punk rock in London and New York. The thought of displaying the CBGBs awning above the exhibit was worth investigating.

I had known Hilly and Louise from my time working with bands and I put in a call to Hilly. He told me that the awning currently in place was not the original and that the first one was stolen years ago by some punk band. Pressed further, he thought it was Jodie Foster's Army.

Hilly wasn’t positive about it but confident in his suspicion. He was still pissed off about it being stolen and wanted it back. I proposed that I’d try to get it back if he’d allow it to be exhibited at the Rock and Roll Hall of Fame and Museum. Hilly was okay with that.

I called a friend of mine who had been deep in the indie punk scene in the '80s and '90s and asked if he knew anybody in JFA. Fortunately, he knew them well. When I told him why I was trying to contact them, he said he thought they had the awning and was kind enough to give me a phone number.

I called and reached Brian and his wife. I dropped my friend's name and told them what I did and they were very friendly. Then I mentioned the awning. They immediately became measured with their answers. They didn't deny having the awning but they didn't flat out admit having it either. I told them that Hilly knew that they had it and he would be happy if they donated it to the Rock Hall. I tried to appeal to their sense of fairness. I admitted it was a great prank but maybe it was time to do the right thing. They told me they would discuss it and I promised to follow up. They never took my call again.

We have reached out to Brian Brannon of JFA directly, and will update on the off chance we ever hear back. Until then, hold your breath and watch one of their sets from CBGBs: