On Tuesday afternoon, the New York Public Library had another ceiling issue in their beloved Rose Main Reading Room. Following the incident, which was due to human error (and was not an issue with the ceiling itself) they released the following statement:

A contractor doing electrical work in the Library's Rose Main Reading Room lost his footing and accidentally punctured the ceiling, causing two small pieces of plaster to fall. No was injured, and the Room was immediately evacuated. The ceiling was inspected, deemed safe, and the Room was reopened 30 minutes later.

The incident was minor and was not related to the previous incident in 2014, when a plaster rosette fell from the ceiling. Following that 2014 rosette fluke, the Room was closed for years to undergo a full, $12 million restoration; it reopened late last year. 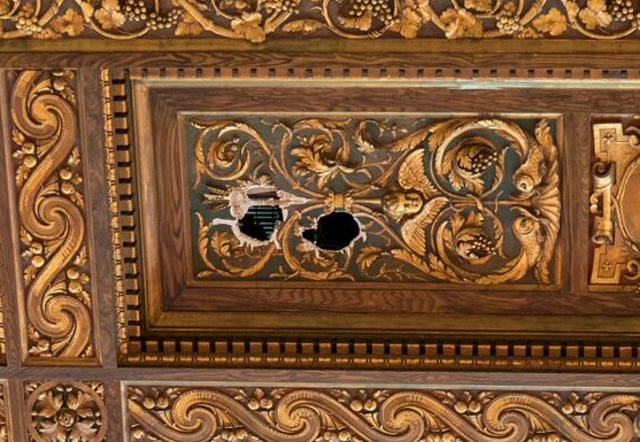 The ceiling is still structurally sound, though the damaged area will need to be repaired. An NYPL spokesperson told Gothamist this morning, "It's still too early to give an exact timeline, but we will repair the ceiling as soon as possible." The Room remains open.

#ceiling
#nypl
#rose main reading room
#original
Do you know the scoop? Comment below or Send us a Tip