For a critical response to the NY Times article titled All Roads Lead To Wythe Avenue, we turned to Brooklyn native Zach Staggers, drummer of The So So Glos, a band who have been immersed for many years in the city's DIY scene, which has deep roots in Williamsburg. Below is Staggers' response to the article, which (if you didn't read it) includes lexical gems like: "and when the sun crept below the jaw-dropping Manhattan skyline, it seemed to activate everyone’s internal Instagram clock." 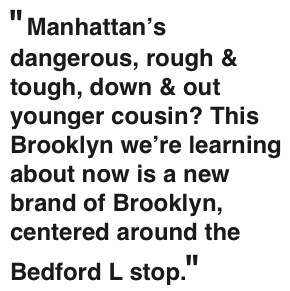 In 1898 Brooklyn was incorporated into New York City. Before that it was on its own, Mayor and all. If Brooklyn didn't have a history, or was a newly developed city, then maybe this would all be tolerable.

The same way that a person who watches Fox News can tend to have a less than comprehensive knowledge of world affairs, a New York Times reader may now suffer a cognitive ailment not all that dissimilar. One believes Obama is a Muslim while the latter thinks the borough of Brooklyn to be a recently created utopia for hipsters and tourists alike—a fantasy land that doubles as a zoo where people can party with, or gawk at bearded, tattooed DJs wearing ironic t-shirts and Ray-Ban sunglasses while chewing on $9 chocolate bars and drinking beer brewed in someone’s bathtub.

The New York Times article, "All Roads Lead to Wythe Avenue", is the paper’s latest in a long line of Brooklyn trend pieces. But the Brooklyn the Times describes bears no familiarity to the Brooklyn I know from my childhood in Bay Ridge, or the “hardworking Brooklyn” my parents from Bensonhurst talk about. It’s not even about the clichéd pop-culture "Crooklyn" that was depicted in movies and on hip-hop albums throughout the eighties and nineties. Remember that version? The one which people sensed Brooklyn as Manhattan’s dangerous, rough & tough, down & out younger cousin? This Brooklyn we’re learning about now is a new brand of Brooklyn, centered around the Bedford L stop. It’s totally gentrified, totally organic, totally artisan and totally irrelevant to the story of the borough thus far.

Brian Williams could not have said it better when he joked that The New York Times “discovered” Brooklyn. To be fair, there is merit to writing on the phenomenon that is Williamsburg. The small businesses that have recently sprouted up are not unlike my father's old bakery. They are much needed and they help Brooklyn keep an identity of its own at a time when Subway and Starbucks are finding their way into every crevasse in Kings County.

The problem is the notion that Williamsburg's culture of all things hip, artisan, and trendy represents all of Brooklyn. There's a whole 'nother borough south of Wythe Avenue that is still a place people settle, work, and raise families. Some are quick to forget about the rest of Brooklyn in lieu of this new, flash in the pan Brooklyn now used as a badge of authenticity. The borough where people were famous for "tawking like this" has gained a certain highbrow cultural value that attracts Manhattanites, tourists, and New York Times writers and readers alike. The culture of Brooklyn has been hijacked in a scheme that only the most genius PR person could conjure up.

The term, "Tres Brooklyn", first published in a Times story on food trucks in Paris, is a "phrase so twee that it is now routinely mocked" according to the Times. And for good reason. It's a fetishization, a warped idea of a Brooklyn that limits the borough’s identity and erases its history. Among all of this Brooklyn branding as a destination for all things hip, Brooklyn's diverse culture is the victim.

So let’s thank God (and large-scale rezoning) that the Wythe Hotel has "helped spiff up a once-desolate corner of Williamsburg." For years, I’ve been holding my breath, waiting for the day that Bedford Avenue would become yesterday's news.

#all roads lead to wythe
#branding
#brooklyn
#the new york times
#the so so glos
#williamsburg
Do you know the scoop? Comment below or Send us a Tip