The Night Of 1,000 Bowies Brought A Bunch Of Bowies To Brooklyn On Friday night, an otherworldly dance party took over the spectacular Beaux-Arts Court inside the Brooklyn Museum. The Night of 1000 Bowies event was hosted by the House of Yes and Little Cinema, and featured dancing, DJs and live performances "honoring the many faces of Bowie, from Ziggy Stardust and Major Tom to the Goblin King." There was a makeup station for those who couldn't quite master a look fitting for the fete on their own, and a photo booth to capture the fleeting magic. 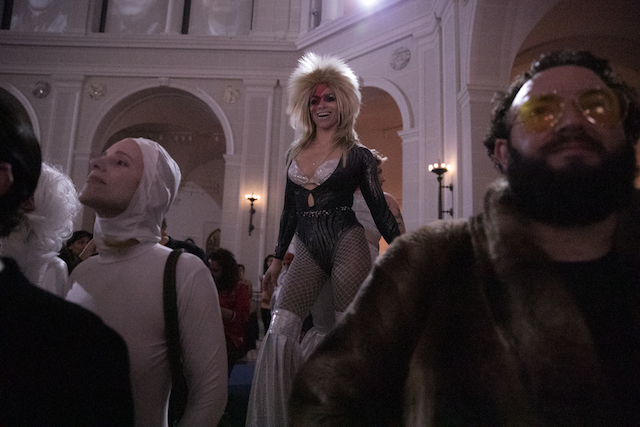 The David Bowie Is exhibit is still on display at the museum, where it will remain through July 15th. The David Bowie exhibit at the Broadway-Lafayette Station also appears to still be up, and should really remain there forever (🎶Ground Control to MTA🎶)

#brooklyn museum
#david bowie
#night of 1000 bowies
#original
Do you know the scoop? Comment below or Send us a Tip
A new Gothamist is coming! We’ve moved comments over to our beta site. Click here to join the conversation and get a preview of our new website.