The New Yorker's Next Cover Is Hardcore: 'Liberty's Flameout'

The current cover of The New Yorker features an empowering illustration of a modern-day Rosie the Riveter, wearing a Women's March pink pussy hat, inspiring hope as women fight for rights the Trump administration seeks to destroy. Next week's cover, however, is anything but optimistic. 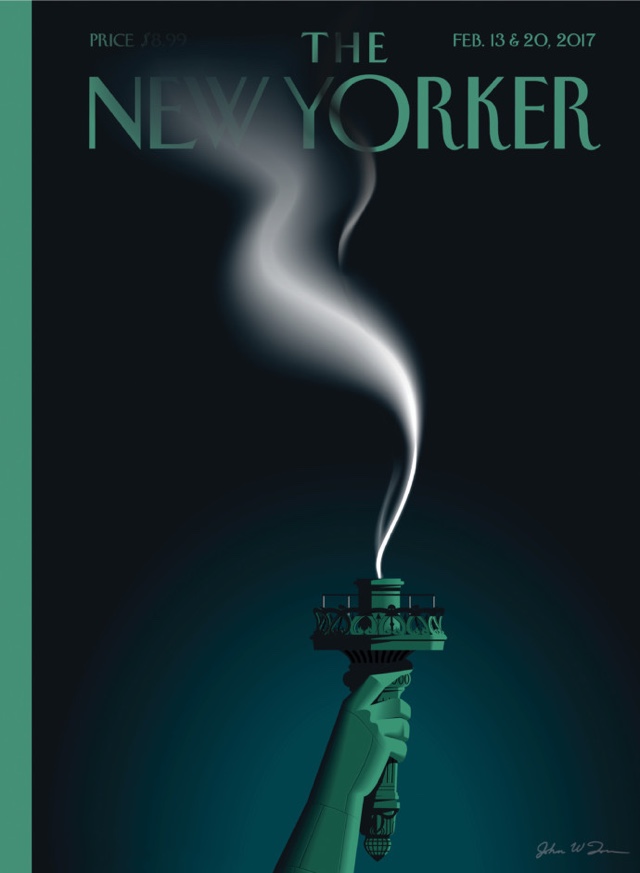 The cover by John W. Tomac

Under more ordinary circumstances, the cover of the issue for February 13 and 20, 2017—our Anniversary Issue, marking ninety-two years—would feature some version of Rea Irvin’s classic image of the monocled dandy Eustace Tilley. This year, as a response to the opening weeks of the Trump Administration, particularly the executive order on immigration, we feature John W. Tomac’s dark, unwelcoming image, “Liberty’s Flameout.”

“It used to be that the Statue of Liberty, and her shining torch, was the vision that welcomed new immigrants. And, at the same time, it was the symbol of American values,” Tomac says. “Now it seems that we are turning off the light.”

After President Trump was elected, The New Yorker's cover was a brick wall under construction.

It seems an appropriate time to revisit Emma Lazarus’s powerful poem "The New Colossus," written in 1883 and inscribed on a plaque at the Statue of Liberty:

With conquering limbs astride from land to land;

Here at our sea-washed, sunset gates shall stand

A mighty woman with a torch, whose flame

Is the imprisoned lightning, and her name

Mother of Exiles. From her beacon-hand

With silent lips. "Give me your tired, your poor,

The wretched refuse of your teeming shore.

Send these, the homeless, tempest-tost to me,

I lift my lamp beside the golden door!"