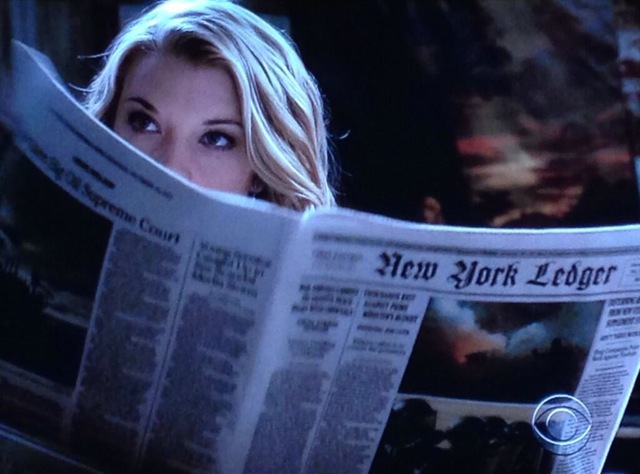 Natalie Dormer, reprising her guest role as a very important woman in Sherlock's life, was spotted reading the New York Ledger, but this Ledger is a broadsheet. It's unclear if it will reappear (Sherlock seems most interested in his smartphone and the Internet) but Law & Order's Ledger references and connections run deep—remember when Detective Olivia Benson dated the Ledger editor played by Bill Pullman? 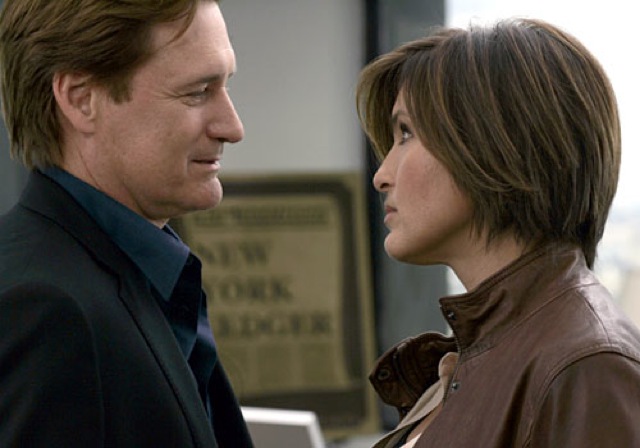 Here are some L&O references to the Ledger, per the Law & Order Wikia:

Sergeant Phil Cerreta read a sentence from an article in the Ledger to his partner Detective Mike Logan. According to him it said: "Mrs. Cullen thanks the police for apprehending her husband's killer". (L&O:"The Wages of Love")

The editor of the competing newspaper New York Sentinel, Ben Elkins, once said that he "wouldn't wipe his ass" with the Ledger. (CI: Pravda)

Olivia Benson leaked information about an anthrax case to a reporter (Jackson Zane) against orders from the Feds. Zane ends up going to prison to protect Olivia. (SVU: "Storm")

also had its own New York Ledger. The shows may be pulling from the past, as there was an actual New York Ledger in the 19th century: The periodical was first a weekly and then a monthly, and publisher Robert Bonner featured works from Charles Dickens and Alfred, Lord Tennyson.

#elementary
#Law & Order
#new york ledger
#olivia benson
#tv
#original
Do you know the scoop? Comment below or Send us a Tip