The New Museum Is Expanding With A Second Sleek Building

The New Museum is plotting an expansion with an adjacent, angular building that will double its exhibition space. On Thursday, the contemporary art institution announced that the architecture firm OMA would be designing its second building, located at 231 Bowery. The forthcoming seven-story structure, headed up by designers Shohei Shigematsu and Rem Koolhaas, boasts three floors of gallery space, will host community programs, and house an artist-in-residence studio as well as the museum's artist incubator, NEW INC.

The museum has owned the second building, formerly home to a restaurant supply company, since 2008, the year after they opened on the Bowery. After years of deliberation, they decided that it would make more sense—and cost less, as The NY Times points out—to build from the ground up, as opposed to working within the preexisting space.

One of the new amenities in the 60,000 square foot space includes an "atrium stair" that "will align to the terminus of Prince Street, opening up the Museum to the city," according to a press release. It'll also add three more elevators (which will help with flow issues that can happen when the museum is busy) and expand the lobby. There will also be an "upper level forum for education and public programs" that connects to the museum's current Sky Room, and a new restaurant, too. 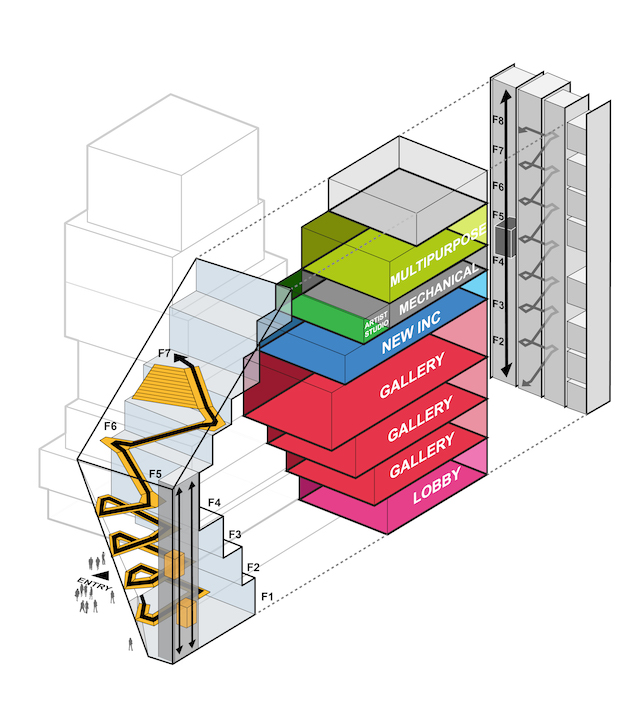 Plans for the interior of the new space. (OMA)

Designer Shigematsu further described the building in a statement: "A counterpart to the existing tower’s verticality and solidity, the new building will expand the galleries horizontally and reveal the vertical circulation through a transparent facade. We wanted to create a highly public face—starting from the exterior plaza and atrium stair to terraced multipurpose rooms at the top—that will be a conduit of art and activities that provides an openness to engage Bowery and the city beyond.”

The museum is slated to break ground next year for the $63 million expansion. The new building will be named for longtime trustee Toby Devan Lewis, who donated a chunk of that cost ($20 million, to be exact). It's expected to open in 2022, and the museum notes they'll be open during "most" of the construction period. 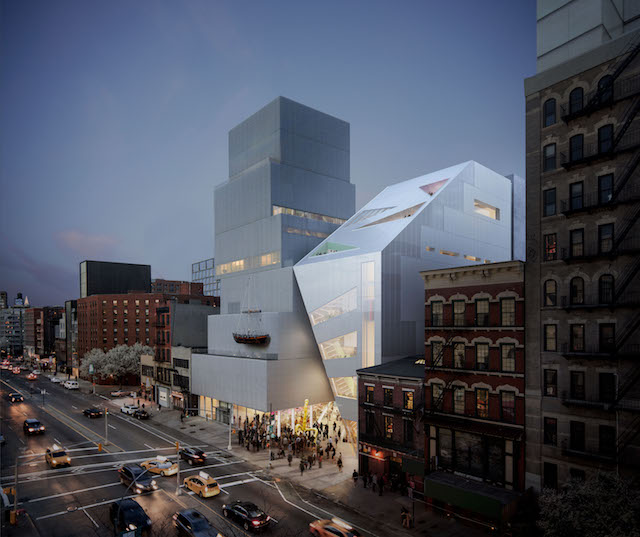 A rendering of the new building at night. (OMA)

The announcement comes amidst some internal strife at the institution. Earlier this week—as the New Museum was opening up new exhibitions by Marta Minujín, Mika Rottenberg, and Lubaina Himid—unionized staffers rallied out front, protesting for a contract as negotiations with their employer continue.